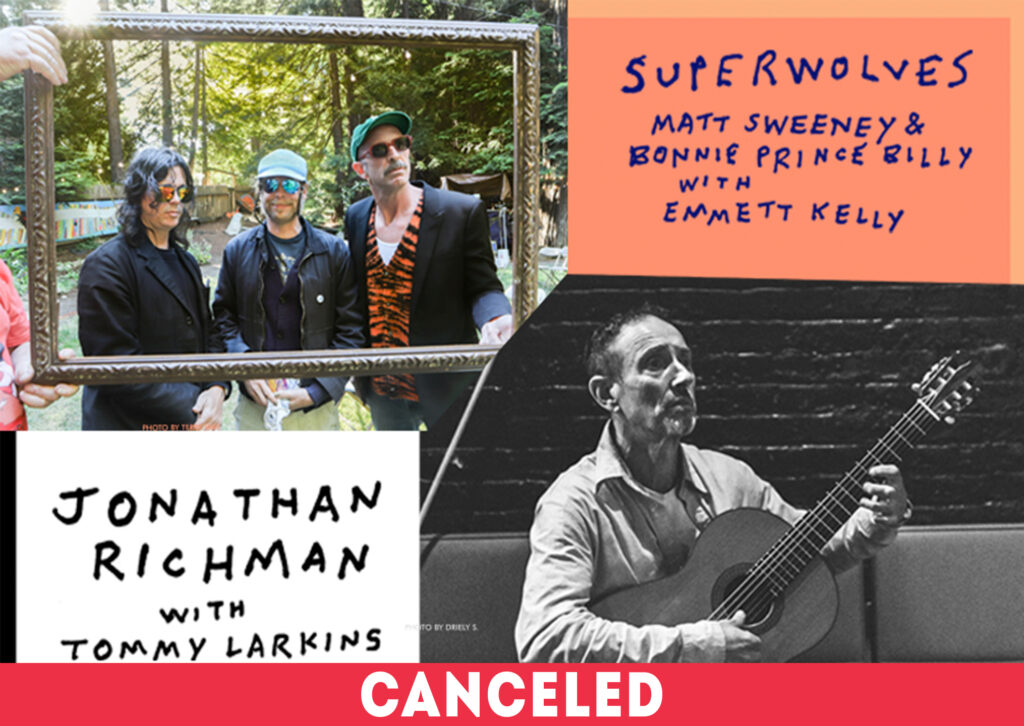 with Emmett Kelly and Tommy Larkins

This event has been canceled.

Ticketholders will receive additional information via email. For questions, please contact the Box Office below.

After a successful roll up and down California this summer, Matt Sweeney and Bonnie ‘Prince’ Billy are now set to prowl through select US cities again this fall in support of their sublime new Superwolves album! To bring the LP’s songs new and newer life, these ‘Wolves add frequent co-conspirator Emmett Kelly to the pack and promise to provide welcome assemblage for all creatures wherever they may roam!

If the simple thought of such magical communion as Matt Sweeney’s guitar and Bonnie ‘Prince’ Billy’s voice doesn’t instantly send shivers down your spine (it’s been a while since you’ve seen a show, huh?), we suggest listening to Superwolves now to fully feel it – and consider, dear reader, what many critical minds have said thus far about this inimitable album:
“[Superwolf] had a specific quality to it, arcane and majestic. Their new one is called Superwolves. Like that first outing, it’s tremendous. Joined by sympathetic set of collaborators, the elemental dynamic remains clear at the center: Sweeney sings and plays electric guitar, Oldham sings with boundless grace about about grim realities, tender moments from hard people, and destiny.” – Aquarium Drunkard

“This was an album that wasn’t promised, but somehow makes good on every silent expectation that was welled up inside the waiting rabble who didn’t know the call could be answered.”- Raven Sings The Blues

“Superwolves serves the song, dressing up where needed, but always presenting them in the manner most direct, even when the songs may take a few listens to sink in and blossom. It’s an album that sneaks up on you — let it play through and play often.” – Brooklyn Vegan

“a triumph of troubador-ism, a lilting and sad album that sparkles with seasoned musicianship.” – Riff

“Richman didn’t need much else besides a beat to work his magic.” – New York Daily News

“Richman is one of America’s most unique and dynamic songwriters…”

“Buy tickets early. Buy tickets often. This is just good general life advice, but even more so when you’re talking about Jonathan Richman. Don’t get denied at the door, don’t leave things up to chance: You will regret it.”

“Richman has spent decades removing barriers between himself and his audience, cultivating an intimacy that is almost extinct in modern music.” – Nashville Scene