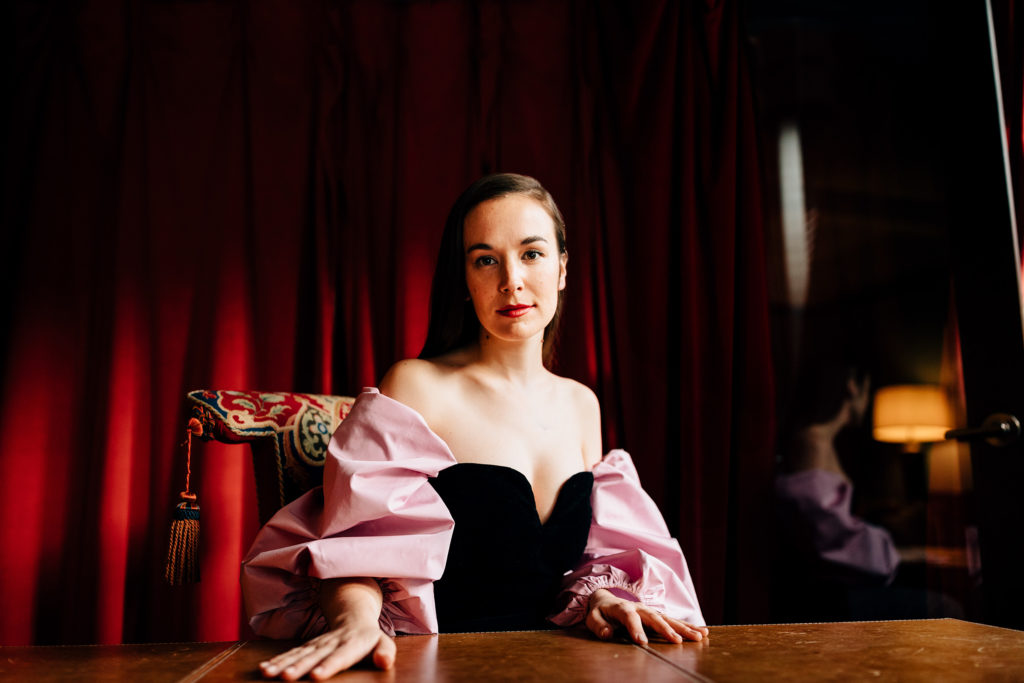 General Admission:
$25 regular
$15 Student
NOTE: The Mill is a mixed seating/standing room venue – a ticket does not guarantee a seat.

On Margaret Glaspy’s long-awaited second album, Devotion, this highly acclaimed young artist reaffirms her status as one of the most sharp-eyed singer-songwriters of her generation while managing to audaciously reinvent her sound. She fearlessly defies expectations — and the results are exhilarating.

Coming home after nearly three years on the road in support of her 2016 debut album Emotions and Math and the 2018 follow-up EP Born Yesterday, Glaspy was eager to challenge herself as an artist and start to make a new album with a clean aesthetic slate. Her bold experimentation has paid off, with tunes that are her most melodically confident, rhythmically compelling, and often incredibly romantic. The arrangements are unexpectedly lush at times, especially on the torchy “Heartbreak,” and often boast an impressive groove, on such tracks as “You’ve Got My Number” and the title song, “Devotion.” Glaspy announces her radical approach at the very start of Devotion, where digitally altered voices serve as the prelude to “Killing What Keeps Us Alive,” and she fills the album with surprising sonic touches, right up to the haunting electronics-and-voice soundscape of album closer “Consequence.”

For Glaspy, Devotion is more about evolution than total transformation. The distinctive personality that marked Emotions and Math is still very much in evidence here. On her debut, Glaspy could be bracingly direct as she chronicled the trials of being alone or the tribulations of being together. She brought swagger, as well as sensitivity, to her lyrics and her performances. On Devotion, she still does, but her perspective has changed: “This record is very different from the last. It’s not about being righteous or all-knowing, it’s about letting love in even when you don’t know what will happen when you do. It’s about devoting your heart to someone or something, against all odds.”

Glaspy toured throughout the USA, Canada, Europe, China and Australia behind Emotions & Math, including dates with Wilco and The Lumineers among others – she also appeared on NPR’s Tiny Desk, CBS Saturday Morning and CONAN. Finding herself in her Brooklyn apartment after all of her travels, Glaspy admits, “It was such a shift for me that I didn’t know what to do with myself when I closed that chapter. I was feeling pretty shy. I like to be alone and I had constantly been around people for two or three years straight. I took a long breath, reorienting myself, trying to find my in to get inspired and to get excited about making records again.”

Glaspy enlisted L.A.-based producer and multi-instrumentalist Tyler Chester, who has collaborated with Blake Mills and Jackson Browne among many others, to produce Devotion – recorded at Atomic Sound in Red Hook, Brooklyn, where they made the bulk of the album. As Glaspy notes, “Tyler and I proved to be a very good match in the studio. I love being very hands-on with my records and he was a force of nature without restricting my sense of what the record should be. His instincts and ability are truly inspiring.” They brought in Glaspy’s touring drummer Tim Kuhl to complete the picture with his brilliantly artful and austere sense of the kit paired with Chester’s programming. Brooklyn-based engineer, Mark Goodell captured these performances masterfully and James Krausse (Los Angeles) mixed Devotion in a way that Margaret says, “she has always envisioned her music sounding like.”

“It has been amazing to be able to stretch out,” she says, “to not define myself just by the music I make, but to follow my nose toward all the things that make me happy.” A good example: Glaspy enlisted herself in distance education through Harvard University to fulfill her dream of getting an education outside of music: “Embracing being a student has made me feel like a child again and I think that has helped to propel my music forward so much more. My brain feels happy.”

Devotion, then, is like a series of hard-earned life lessons. Glaspy’s evolution over the last few years has been both musical and personal, which makes the album that much more compelling: “I’m learning that life is painful but you take the bad with the good; that love is hard but if you love someone, you make yourself available; that life is short and it’s okay to be sincere. I’m starting to be able to write about these things and it’s a feat for myself as an artist and growth for me as a person.”