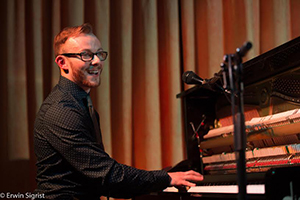 Iowa City native Chase Garrett, voted “Best Local Act” in Iowa City, IA by the Daily Iowan in 2011, began playing piano professionally at age 17 and within a few years was performing at blues and boogie woogie festivals across the U.S. and Europe. Having been heavily influenced by artists such as Oscar Peterson, Erroll Garner, Sunnyland Slim and Meade “Lux” Lewis, his style has grown into an infectious and diverse blend of boogie woogie, blues, swing and stride piano that is sure to satisfy any audience. Chase has dedicated himself to the piano not only as a pianist, but also as a piano technician, instructor, event organizer, transcriber and producer. He has brought world class pianists, dancers and musicians to The Englert Theatre in Iowa City, IA for his annual Blues & Boogie Woogie Piano Stomp Festival and has taught master classes and piano performance at colleges, blues weeks and swing camps across the U.S. Chase now resides in St. Louis. MO.

More info can be found @ www.chasegarrett.com 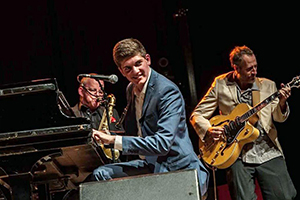 Ben is one of only a handful of “fourth generation” boogie woogie musicians in the U.S. Ben started performing professionally at age 11 with his father’s band, the Heaters, and since then has played over 200 performances in a variety of configurations; with the Heaters, or with his own band, The Ben Levin trio. Recently, Ben won second place in the solo/duo category of the Cincinnati Blues Challenge with the Ben Levin duo. This duo consists of Ben alongside his mentor and friend Ricky Nye, who went back to his musical roots to back up Ben on drums. Ben has also performed at a number of prestigious festivals and events across the U.S. such as the Cincinnati Blues Fest, Chicago Blues Fest, Ricky Nye’s Boogie and Blues Piano Summit, as well as countless clubs, bars, and restaurants. 2017 is also a big year for Ben, as he is headed to Europe to perform at the 19th Annual LaRoquebrou Boogie Woogie Festival in LaRoquebrou, France, where 15,000 blues, boogie woogie and swing enthusiasts from around the world gather for three days of music and dancing. Ben has also recently released his first CD titled, “Ben’s Blues.” Which showcases Ben’s powerful performance abilities both as a pianist and vocalist.

More info can be found @ www.benlevinpiano.com

Belter of the blues and American songstress extraordinaire, miss Emilie Richard has been thrilling and entertaining audiences with her sultry vocal stylings and dazzling performances since her first appearance in 2014. Her meticulous adherence, yet revitalizing approach to recreating the authentic sights and sounds of America’s popular music of the 1920’s – 1950’s has helped her to not only attract a strong following of admirers of all ages, but also has allowed her to explore new soundscapes while still remaining devoted to her traditional vintage roots. Miss Richard is also the co-founder, band manager and all around ringleader of St. Louis based vintage jump blues, barrelhouse and boogie woogie group “Sweetie & The Toothaches.” Founded in 2015 in tandem with international blues & boogie woogie pianist Chase Garrett, “Sweetie & The Toothaches” is quickly becoming the premiere jump blues and boogie woogie band within the St. Louis area while steadily gaining popularity in both the swing dance scene and boogie woogie circuit. Emilie is certainly becoming a force-to-be-reckoned-with and is working hard to pave herself a sturdy path to a very bright and sound musical career. Simply put, she is a sensational performer and vocalist that begs to be seen and heard!

No other performer on the scene today brings to life and pushes forward the great tradition of American R&B Sax like Sax Gordon! From an early start in garage bands, church groups, jazz combos and big bands in northern California, Gordon graduated to work and record with Bay-Area Blues giant Johnny Heartsman. After relocating to the East coast, five years and many recordings with Luther “Guitar Junior” Johnson established Gordon on the international scene. With Luther’s encouragement, Gordon continued to develop his signature style, hard-blowing, exciting, gutsy sax steeped in the traditions of Blues and Soul. Currently Gordon can be found leading his own groups worldwide. The Sax Gordon Band plays rockin’ R&B, Blues and Soul, sometimes with a full horn section, while another group, Sax Gordon & the Little Town Rockers specializes in Jump Blues and Swing. Gordon continues to appear as a special guest with groups all over the globe, conducts clinics at schools and festivals and also works as a sideman, backing both established performers and up-and-coming artists.

More info can be found @ www.saxgordon.com

David I. Gomez Rios, born and raised in Panama City, Panama, started playing guitar at the age of six after some encouragement from his father, but later picked up the saxophone when he was twelve. David’s love for the saxophone only grew stronger throughout his teen years and at the age of nineteen he was presented with an opportunity to travel to the U.S. after receiving a music scholarship to Lindenwood University in St. Charles, MO. He gladly accepted and moved to the U.S. later that fall. David started performing in and around St. Louis soon after arriving in the U.S. and by the time he was a junior had already earned himself a reputation around town as one of the best in the blues scene. After college David started turning his focus to the honking and wailing sax style of the 1940s and 50s and within a few months was offered touring opportunities all around the country with rock, blues and R&B bands. David currently performs with Jake Rowley and the Payola Kings, a 50s rock and roll group based out of Texas, as well as with Miss Jubilee & The Humdingers and Sweetie & the Toothaches among others within St. Louis and the surrounding area.

Excelling as a professional saxophonist, clarinetist and flautist alike, Saul Lubaroff stands a great cog in the music scene of eastern Iowa. As a performer of jazz, blues, soul, klezmer, classical, and pop music, Mr. Lubaroff is a veteran amongst most successful bands of the area. He performs with The Fez, a 15 piece Steely Dan Tribute Band, as well as Johnny Kilowatt Blues Band and Shade of Blue, a local soul band. Saul has shared the stage with George Clinton and PFunk, Liquid Soul, Clark Terry, Michael Woolf, Jon Batiste and Stay Human, and Alex Foster of the Saturday Night Live band. He has also performed locally with Orchestra Iowa, the Band Salaam (Persian and Mediterranean music), the Blue Band, Brass Transit Authority, local big bands, funk bands, and his own quartet.

More info can be found @ www.sauljazz.com

Al Naylor holds both Bachelor’s and Master’s degrees in Music Education from the University of Northern Iowa and is currently the lead Trumpet Artist / Instructor at Coe College in Cedar Rapids, IA. Throughout his career Al has won numerous awards which include being inducted into the JEI Hall of Fame in 2013 as well as being inducted into the Iowa Rock and Roll Hall of Fame in 1999. Al has also shared the stage with many great jazz artists including Clark Terry, Wycliffe Gordon, John Pizzerelli, Aretha Franklin, The Temptations and the Glenn Miller Orchestra. He was a founding member of the popular area group, Orquesta Alto Maiz, with whom he performed at the prestigious Montreux Jazz Festival in 1998 and Al has also led his own big band, Al Naylor and the I-380 Express for over 20 years; performing for Variety Club Telethons on Cedar Rapids television station KCRG TV9. Al was also the lead orchestrator and arranger for the Cedar Rapids Symphony Orchestra and its Discovery Chorus from 1995 to 2009 and is currently the leader of the CR Jazz Big Band which will be performing at the Iowa Bandmasters Convention in May of 2016. 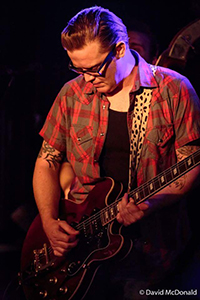 Having been born and raised in Dallas, Texas, Elliot was blessed with the opportunity to listen to a grow up alongside some of the best blues guitarists on the planet at a young age. Two Texas blues guitar legends, Brian Calaway, aka Hashbrown, and Anson Funderburgh both took Elliot under their wing as a young teen and taught him much of the incredible texas blues style guitar that he performs today. Elliot began to tour and perform professionally all across the U.S. throughout his twenties and as a result has shared the stage with such notable performers as John Nemeth, Brandon Santini and Randy McAllister to name a few. Elliot currently resides in St Louis, MO where he has become a blues guitar legend of his own in the community, performing regularly and keeping the “real” blues alive and well.

Craig Dove has a long and varied history as a musician. He plays both upright and electric bass, piano, guitar and is also an accomplished vocalist. He has performed extensively throughout the U.S. at jazz clubs, cathedrals and concert halls and at various jazz festivals in the U.K. Most notably the Croydon Jazz Festival in London, England as well as having previously opened for Duke Ellington and Dionne Warwick in the U.S. Craig is also a composer and has recorded several records with a variety of local and national musicians as well as having made several solo recordings. To augment his life as a musician, Craig is a physician specializing in Physical Medicine and Rehabilitation at St. Luke’s Hospital in Cedar Rapids, Iowa. 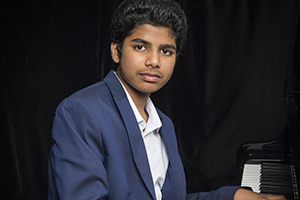