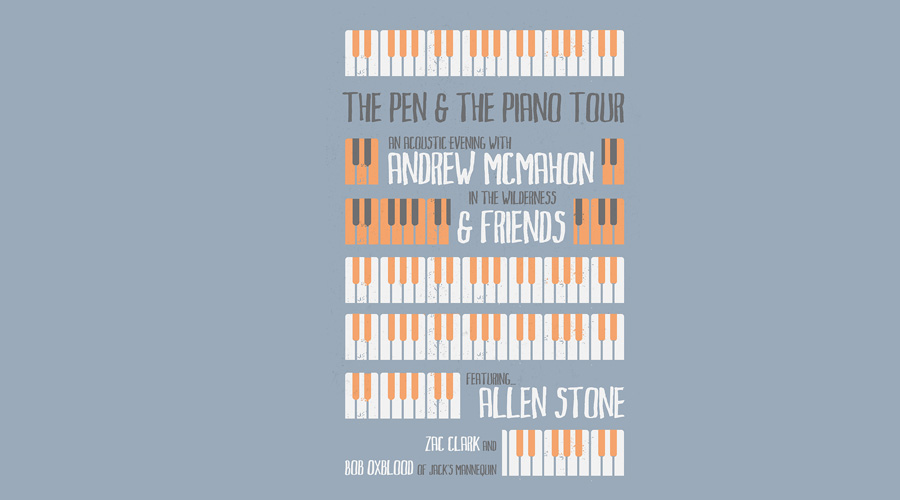 Andrew McMahon in the Wilderness & Friends

Singer-songwriter Andrew McMahon (Something Corporate, Jack’s Mannequin) will perform at the Englert with his project Andrew McMahon in the Wilderness & Friends. As part of the Pen & Piano Tour, McMahon will present an acoustic evening with Allen Stone (2017 Englert headliner), Zac Clark, and Bob Oxblood (formerly of Jack’s Mannequin).

“In my mind’s eye it’s equal parts VH1 Storytellers and Mr. Roger’s Neighborhood…” McMahon writes. “It will be weird and fun and honest. An exploration of the moments in between, that make a song worth writing.”

McMahon was a mainstay in the early-2000’s emo/pop punk circuit with Something Corporate, headlining the 2002 Van’s Warped Tour and selling more than one million records in the band’s ten active years. During a hiatus, he formed Jack’s Mannequin with Something Corporate bandmates Bobby Anderson and Richard Hernandez, releasing three albums. He currently tours under the moniker Andrew McMahon in the Wilderness, recently as support for Weezer/Panic at the Disco’s Summer 2016 tour.