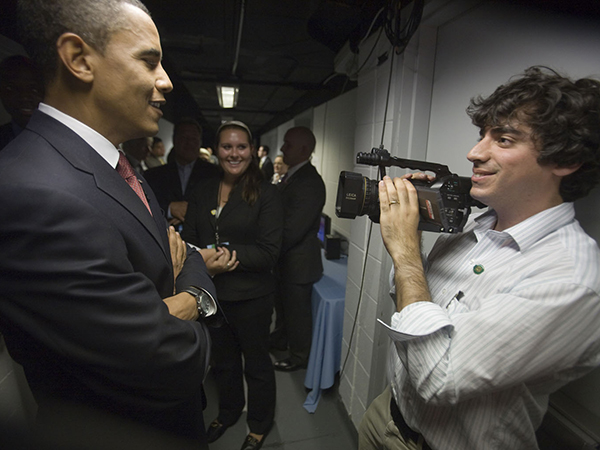 Political Storytelling in the Digital Age

Arun Chaudhary is a filmmaker working in politics. He was the first Official White House Videographer, a position created for him at the beginning of the Obama administration. Chaudhary traveled extensively with the President, capturing public events and behind-the-scenes moments as well as producing and packaging presidential tapings for the Internet and broadcast television. He is the creator and architect of “West Wing Week”, the first-ever online video diary of the White House. During his tenure, he wrote, produced, shot and edited over 63 episodes of West Wing Week, documenting the President through his rigorous weekly agenda. He also directed many tapings of the Weekly Address. During the 2008 campaign as the New Media Road Director, Chaudhary oversaw the team responsible for capturing the day-to-day life of the future president in video and stills. He and his team set a new standard in documenting history, delivering crucial images to the public from the road in real time.

Chaudhary is currently Creative Director at Revolution Messaging and was recently Digital Creative Director for Senator Bernie Sanders, heading up the team that makes the graphics, videos, and photos for the Bernie 2016 presidential campaign..

Before joining the Obama team, Chaudhary worked in film in New York and was part of the NYU Graduate Film Department faculty. He got his MFA in Filmmaking from NYU and his BA in Film Theory from Cornell University.

He has been profiled by the New York Times, the BBC, National Journal, Politico, Fortune, and many political websites, and led a Frog design mind seminar at NYU with Fast Company’s Ellen McGirt. He lives in Washington, D.C., with his wife, son and daughter.