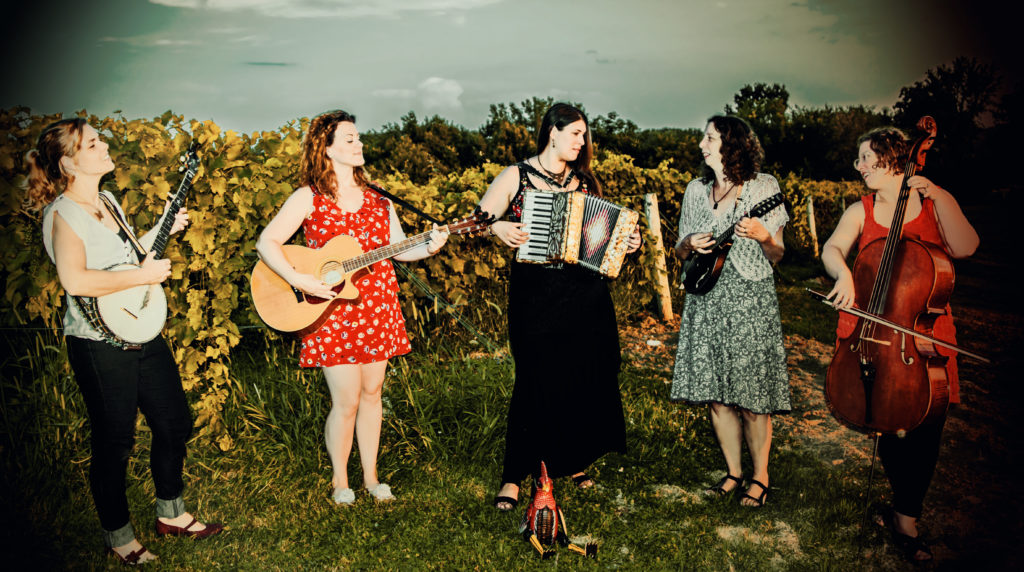 Ticketing: $15 General Admission
$5 Youth Ages 18 and Under
Purchase tickets at the Box Office or Online

Join Awful Purdies for a concert celebrating their third album All Recipes Are Home at the Englert Theatre on June 27, at 7 p.m. All Recipes Are Home is the culmination of a year long project in which Awful Purdies received project support from the Iowa Arts Council, a division of the Iowa Department of Cultural Affairs and the National Endowment for the Arts to travel around the state playing concerts for and interviewing farmers and food workers in what the Purdies describe as “story circles.” In addition, Awful Purdies received a a song writing commission from Working Group Theatre to write songs to be included in the the new play All Recipes Are Home, which gives this new album its name.

About Awful Purdies:
Awful Purdies are an eclectic quintet of female multi-instrumentalists who take turns stepping up as songwriter and lead singer. The ensemble purdify’s each song they meet, letting the song lead the way. One song might require channeling the Andrew’s Sisters, while another song might reach out to a rock-a-billy or Motown sensibility. With “The Katie’s” (Katie Senn on cello and Katie Roche on accordion) laying down each songs base, their songs sound full and orchestrated, while Nicole Upchurch’s banjo, Marcy Rosenbaum’s mandolin and Sarah Driscoll’s guitar skillfully root Awful Purdies fully in the modern folk genre.

Support for Awful Purdies’ All Recipes Are Home provided by Working Group Theatre, Seed Savers Exchange, Maximum Ames Records, the Iowa Arts Council, a division of the Iowa Department of Cultural Affairs and the National Endowment for the Arts. Please visit www.awfulpurdies.com for more details.