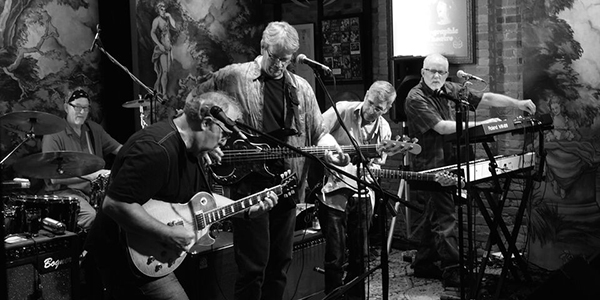 A Musical Trip Back to Peace, Love and Rock and Roll

Ticketing: $13 General Admission In Advance
$15 Day of Show
Purchase tickets at the Box Office or Online

Since 2007, The Beaker Brothers Band has been playing the best of the music of the late 1960s to early ‘70s in clubs, outdoor festivals and concert halls. The band, made up of local “seasoned” musicians, all cut their musical teeth on this music and now bring it back with the passion, experience and musical detail it deserves.

The Beaker Brothers Band has built a steady following of like-minded music lovers over the years. Many having shared the experience of hearing the original music on the late night radio show called “Beaker Street,” (late 1966-1972) over the AM airwaves of KAAY, Little Rock, AR. In fact, that show, hosted by the legendary Clyde Clifford, was an early inspiration for the young members of the band, and eventually for the band name. The 6-piece Beaker Brothers Band, with the classic 2-guitarists, 2-drumers, bass and keyboard set up, has always had the music of the Allman Brothers Band and Santana at the top of their set lists.

Now The Beaker Brothers Band will present a night dedicated not only to celebrating the music of these two premiere American rock bands, but to re-creating the classic late 60s concert experience as well. All of this in Easter Iowa’s concert hall-gem, The Englert Theater. Come early and enjoy a tasting of micro brews from New Belgium Brewing Company.

Besides select special musical guests who will join the Beaker Brothers this night, Lance Gordon’s Mad Alchemy will be providing the classic liquid light show. With multiple projectors, Mad Alchemy creates the psychedelic-light show experience from the San Francisco tradition of Bill Hamm, Glen Mckay and Brotherhood of Light; the heyday of the Bay’s psychedelic ballrooms.

If you love the music of the Allman Brothers Band and Santana, and you want to experience the joy of this music live, in a classic 60s concert setting, please join the Beaker Brothers, Mad Alchemy lightshow and special guests at the Englert Theater, Friday, Oct. 9th at 8:00 p.m.