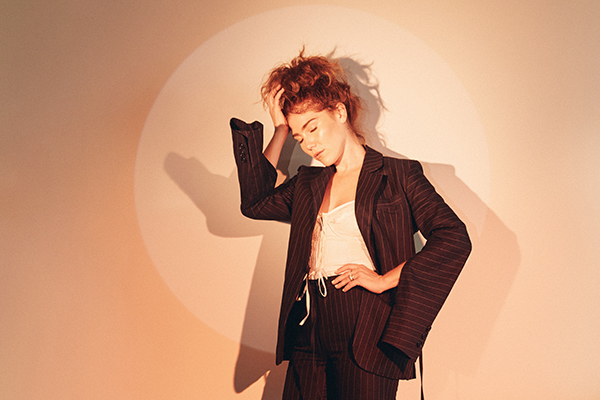 Ticketing: FREE and open to the public
The event is free, but for those 21 and over, you may purchase a cup for $10 (with valid I.D., plus fees) for beverages. Only available online. Not available for purchase at the Englert Box Office.

From 5 to 11 p.m. at the Weatherdance Fountain Stage on the Ped Mall, see Smith, Moen, and more in a free, family friendly event. The Downtown Block Party will take over seven blocks and the entire Ped Mall for an evening of concerts, dueling pianos, games, fashion and drag shows, movies, and more!

The event is free, but for those 21 and over, you may purchase a cup for $10 (with valid I.D., plus fees) for beverages.

About Caroline Smith:
After spending the greater part of 2015 in her adopted town of L.A., Caroline Smith is coming back home, with her full ensemble in tow, to tour her native mid-west. After writing for her new record over the fall, Smith is back on the road to promote her forthcoming EP, and to revisit the smoky arrangements and unabashedly honest lyricism of her 2013 release, Half About Being a Woman.

Smith’s live show adds depth to her unique take on R & B pop and alternative neo-soul; Her full band of experienced players adds lush layers to her singles such as the feminist anthem, “Magazine”, and the heart-wrenching soul of “Child of Moving On”. As a performer, Caroline Smith leads with a compelling performance that will mesmerize anybody who watches, and she will deliver her most fully-realized and exciting set yet on her upcoming tour.

About Elizabeth Moen:
After a solo tour in Europe this February of 2017, Elizabeth Moen is back in the Midwest and ready for touring with her bandmates Justin, Blake, and Dan. Elizabeth was raised in Vinton, Iowa and recently graduated from the University of Iowa in Iowa City. She began playing guitar as a teenager, though it was thanks to the writing community of Iowa City that she was inspired to write her own music. Her sound and songs are inspired by the likes of Emmylou Harris, Johnny Cash, Van Morrison, and modern acts like Angel Olson, Esmé Patterson, Alabama Shakes, and Shakey Graves