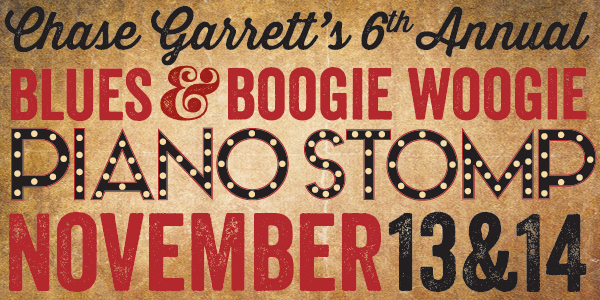 CHASE GARRETT (IOWA CITY, IA)
Iowa City native Chase Garrett, voted “Best Local Act” in Iowa City, IA by the Daily Iowan in 2011, began playing piano professionally at age 17 and within a few years was performing at blues and boogie woogie festivals across the U.S. and Europe. Having been heavily influenced by artists such as Oscar Peterson, Erroll Garner, Sunnyland Slim and Meade “Lux” Lewis, his style has grown into an infectious and diverse blend of boogie woogie, blues, swing and stride piano that is sure to satisfy any audience. Chase has dedicated himself to the piano not only as a pianist, but also as a piano technician, instructor, event organizer, transcriber and producer. He has brought world class pianists, dancers and musicians to The Englert Theatre in Iowa City, IA for his annual Blues & Boogie Woogie Piano Stomp Festival and has taught master classes and piano performance at colleges, blues weeks and swing camps across the U.S. Chase now resides in St. Louis. MO.

DARYL DAVIS (WASHINGTON, D.C.)
Chicago native Daryl Davis graduated from Howard University with a degree in Jazz. Additionally he was mentored at a young age by legendary pianists Pinetop Perkins and Johnnie Johnson, who both claimed him as their godson and praised his ability to master a piano style that was popular long before he was born. Apart from The Daryl Davis Band, he has worked with Elvis Presley’s Jordanaires, Chuck Berry, The Legendary Blues Band, The Coasters, The Platters, The Drifters, Percy Sledge, and many others. Daryl’s CD’s “American Roots” and “Alternate Routes,” received rave reviews from leading blues magazines, winning several WAMA (Washington Area Music Association) Awards for Best Artist in the Roots and Blues categories. Daryl also tours both nationally and internationally and just released his “Greatest Hits” CD. In addition to being a pianist and vocalist, Daryl is also an actor, author, and lecturer, now residing in Maryland.

BALÁZS DÁNIEL (GYOR, HUNGARY)
Balázs Dániel began playing piano at age 14 and after hearing a boogie woogie pianist perform in Switzerland just two years later, became completely obsessed with boogie woogie music. Balázs brings new colors into the world of boogie woogie with not only his creative ideas and artistic approach, but also his unique virtuosic style. Since his first public performance in 2007, Balázs has released three CD’s with his trio which he formed in 2009 and in addition to his successes in his homeland, the Boogie Woogie Ambassador of Hungary has also become a regular performer at many well known International Blues and Boogie Woogie Festivals in such European locals as Austria, Germany, France, Poland and Switzerland. Balázs is also the organizer and host of the only Boogie Woogie Festival in Hungary; Boogiefeszt. Held since 2008, it has quickly become one of the largest boogie festivals in the world and features a variety of jazz bands, boogie woogie dancers, international pianists and guest musicians each year.

JOE SMITH & THE SPICY PICKLES JAZZ BAND (DENVER, CO)
Joe Smith and the Spicy Pickles Jazz Band is a Denver-based vintage jazz band devoted to revitalizing swing music and dance. This small group style swing band packs a punch of power, personality, and wit into each show, intriguing generations new and old with the beloved charm of big band swing from the 1920s, 30s and 40s. The Pickles bring it all— high energy, quality musicianship, and an authentic big band sound and look that celebrates the unique American spirit of swing. The band fuses musical influences from the sounds of Count Basie, Benny Goodman, and Artie Shaw with the showmanship of Louis Armstrong, Lucky Millinder, and Jimmy Lunceford. With a smart respect for the preservation of vintage jazz music and entertainment, the Pickles are constantly adding new and original tunes to their repertoire. They bring a unique visual flair to each performance with gimmicks, tricks, horn movements, and hat work inspired to captivate audiences all night long.

THE CR JAZZ BIG BAND LED BY AL NAYLOR (CEDAR RAPIDS, IA)
The Cedar Rapids Jazz Big Band is a unique organization of approximately 20 community members with diverse backgrounds joined together to form a polished and lively set of arrangements and original compositions. The repertoire of C.R. Jazz consists of traditional swing music of the 1930s and 40s through contemporary jazz of our new millennium. The group performs big band dances, concerts and benefits for local organizations and private functions in the Cedar Rapids area.

RASMUS & TOVE HOLMQVIST (STOCKHOLM, SWEDEN / GENEVA, SWITZERLAND)
Rasmus & Tove Holmqvist have been dancing together since 2006, but had both been dancing on their own for many years prior to this partnership. They began traveling the world to compete, teach and spread their joy of dancing after winning their first big title in 2007 as Swedish Champions in the junior division of Boogie Woogie and in 2008 became official world champions. They have been ranked within the top three in the main class of Boogie Woogie since 2012 and have been climbing their way up the world ranks ever since. In 2013 they placed third at the World Dance Sport Games in Taiwan and the same year placed second at the European Boogie Woogie Championship. The last time they competed was at the Boogie Woogie World Championship in 2014 where they finished on top placing third both in the World Championship and on the world ranking list. Their goal has always been to spread their love of boogie woogie dance and music around the world!

Each concert will also feature:

Josh Duffee has been a featured musician at jazz festivals all over the world and has toured England and Australia multiple times, while being featured at venues all over the United States, including Jazz at Lincoln Center. He is the leader of many groups in the Quad City area including The Graystone Monarchs, Josh Duffee & His Orchestra, and The Josh Duffee Jazz Quartet. Josh’s influences in drumming include many great musicians such as Chauncey Morehouse, Baby Dodds, Zutty Singleton, Gene Krupa, Chick Webb and Vic Berton. One of his good friends growing up was the great Louie Bellson, who Josh took lessons from when he visited the Quad Cities. Josh’s drumming is full of energy and excitement, but he also knows how to help drive the rhythm section behind the front line. He performs on his vintage Leedy drum kit which helps capture the true swing-era drumming sound. Josh also has a drum studio at his home in Davenport, and enjoys spending his free-time with his wife Crystal, and their 8-year-old son, Chauncey.