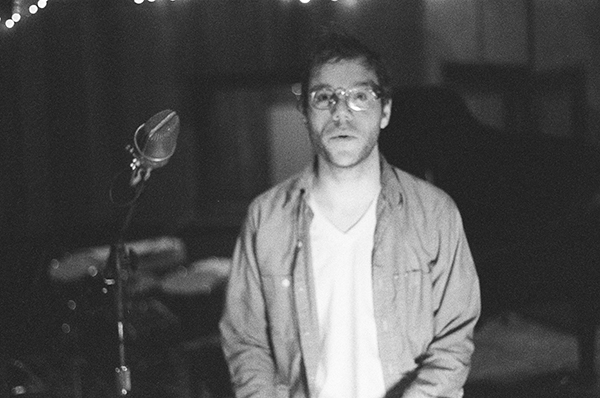 Intimate at the Englert | Sponsored by Little Village and Hands Jewelers

Christopher the Conquered wants you to read between the lines. That said, he’s got a damn good reason for naming his full-length debut album, I’m Giving Up On Rock & Roll [Maximum Ames Records].

It’s this sort of pure honesty that defines the album’s nine tracks, and it’s also why Christopher made some serious waves in 2015. The Iowa singer, songwriter, and performer has crafted a declaratory musical statement that’s impossible to ignore. In the summer of 2015, he shared the stage with Natalie Prass and handed her an early copy of I’m Giving Up On Rock & Roll. She in turn passed it on to Ryan Adams who took to Twitter and Instagram calling the album, “Crazy and incredible.” Soon after, Christopher landed on the front page of Reddit and in Billboard as the title track and single “I’m Giving Up On Rock & Roll” quickly passed 60,000 plays on Soundcloud. This properly set the stage for the album’s 2016 release.

“I wanted this to be a cohesive experience that takes listeners on a journey,” he goes on. “This album strips everything back; this is me.”

Mapping out the skeleton of the record from the piano melodies to the horns in his Iowa basement, Christopher had architected a clear vision by the time he entered Ardent Studios in Memphis with producer Patrick Tape Fleming. As a result, they cut the entire album to tape in just nine days.

The music segues from pensive lyricism to heavenly horns and resounding keys on the likes of the elegiacally gorgeous “On My Final Day.”

“I always want people to really focus on the lyrics,” he says. “The song is about contemplating the way you spend your time and the one life you have. It comes out in a positive light asking the question, ‘What impact did I make?’”

Everything culminates on the delicate strings and guitars of “I’m Not That Famous Yet” where Christopher’s self-effacing philosophizing reaches divine heights as expansive as his vocal range.

“I was in a bit of a jealous mood,” he admits. “I was watching a band, and I wrote this in response to the silliness of the interplay between the audience and the artist. After I wrote the song, I sorta snapped out of it and realized that group worked their asses off up to that point and brought joy to every person in the room. Now, I get excited for another artist’s success because it means there are opportunities for me to do what I want to do.”

Christopher has known what he wanted to do since growing up in an Iowa town of just 1,300. Without even an antenna for the family TV let alone cable, he became obsessed with music through listening to Motown and classic rock & roll with his parents and repeatedly watching Disney classics like The Lion King and The Jungle Book on repeat. He taught himself drums, trumpet, piano, and guitar, even auditing a college Jazz History class at just 12-years-old alongside his dad. He also found music via faith. Living in a devoutly religious home, he spent a lot of time in church.

“Our church was full of music, and I even played for a while as part of a worship group there. The experience taught me the power of music to connect with people on an emotional level. That spiritual feeling is something that has stuck with me, and that I try to inject into my performances.”

“This album isn’t for me,” he leaves off. “The art happens when you’re alone at the piano. I got my satisfaction from that part of the process. Now, I’ve created something for the world. I want people to reflect on their lives and what they’re doing when they listen to this and feel happy. There’s no reason to live under any pretense or obligations other than your own passion and love. The album is about that.”