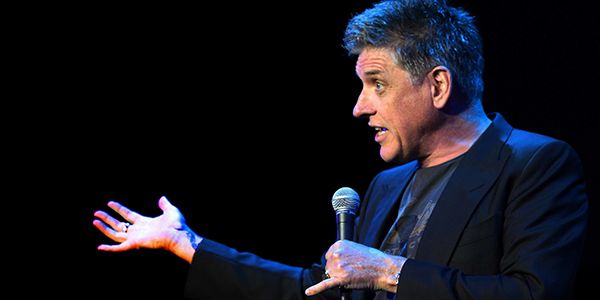 Presented by The Englert Theatre and Steve Litman

Craig Ferguson entered the world of late night comedy following a diverse and eclectic career that encompasses film, television and the stage. Since taking the helm of CBS’s “The Late Late Show with Craig Ferguson” in 2005, the show has set all-time viewer records in the nine years that it has been on the air.

Ferguson stepped down as host of “The Late Late Show” in December 2014. Ferguson was most recently heard on the big screen as he reprised his character ‘Gobber’ in “How to Train Your Dragon 2.” On September 22nd, 2014, the new syndicated game show “Celebrity Name Game” debuted with Ferguson as host, putting celebrities on the spot as they compete to identify famous names based on improvised clues.

Ferguson has also become a huge success on the North American comedy circuit. He has performed to sold out theaters all over the country and sold out Carnegie Hall in October, 2010. In October 2012 Craig performed his highly praised stand-up at New York City’s Radio City Music Hall to a sold out audience. Additionally, Craig has three widely acclaimed stand-up comedy specials, “A Wee Bit O’ Revolution”, which premiered on Comedy Central and was released on Home Video in 2009, and “Does This Need To Be Said,” which premiered on Epix in 2011, aired on Comedy Central and was released on Home Video. In the summer of 2013, Craig released his third comedy album “I’m Here to Help,” garnering him a Grammy nomination for Best Comedy Album. The stand-up special premiered on Netflix and was later released on DVD.