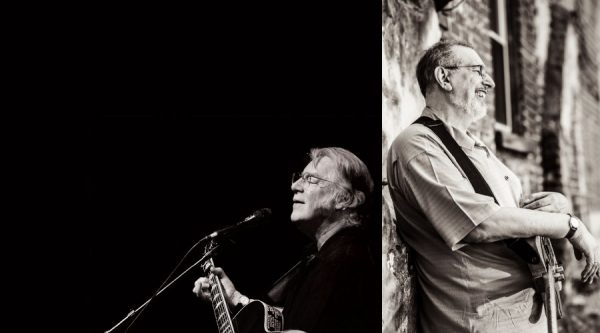 Two American music greats David Bromberg and John Sebastian will join for a performance live at the Englert on Sunday, October 15 at 7 p.m.

A godfather of Americana and accomplished blues guitarist and multi-instrumentalist, Bromberg is renowned for his unparalleled playing and gift for interpretation. His career spans more than 45 years, with collaborators such as Bob Dylan, George Harrison, Jerry Garcia, Carly Simon, Emmylou Harris, and The Eagles. A protégé of Reverend Gary Davis, Bromberg’s penchant for the blues led him to record 2016’s The Blues, the Whole Blues, and Nothing but the Blues, which PopMatters calls “a master class in blues-oriented Americana.”

A frequent collaborator of Bromberg, Sebastian is best known as a pioneer in the mid-‘60s rock revolution with his band The Lovin’ Spoonful. With their first seven singles in the Top 10 during the height of Beatlemania, The Lovin’ Spoonful solidified their place in American history and the Rock and Roll Hall of Fame by tying modern sensibility with roots, country, folk, and jug band influences. Sebastian was a fixture in the Village folk scene, legendary Woodstock performer, Broadway musical composer, and acclaimed studio harmonica player.