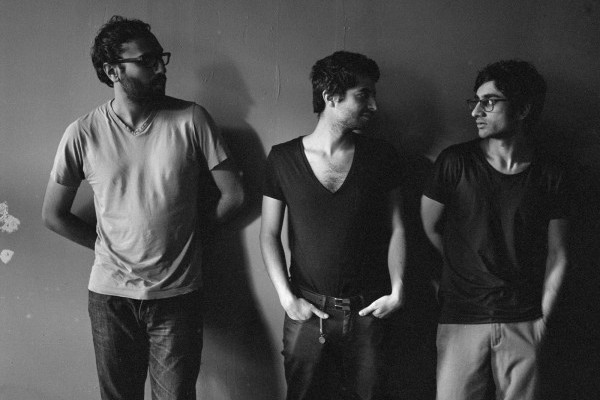 Ticketing: $10 / $15 G.A. (+ fees)
Purchase tickets at the Box Office or Online
Silver Pass – $135 – The Silver Pass grants access to all Mission Creek Festival ticketed music and comedic performances. Free events are subject to capacity. Entrance to ticketed events at the Blue Moose and Englert is guaranteed at all times. Entrance to other venues is subject to capacity – arriving early often secures admission. Special VIP events such as receptions, special dinners and brunches, screenings at FilmScene, are not included in the Silver Pass and require the purchase of additional tickets.

Dawn of Midi is a Brooklyn-based acoustic ensemble made up of Aakaash Israni from India on double bass, Amino Belyamani from Morocco on piano and Qasim Naqvi from Pakistan on drums. Formed in 2007, the band name was happened upon after Naqvi casually uttered the phrase by chance as a non sequitur for the improvised music the trio was making at the time, they had no idea that years later they would make an album like Dysnomia that would make their name appear fateful.

Having met at California Institute of the Arts in Los Angeles in 2006, the trio found their original rapport through late night tennis matches on the campus court. The chemistry they founded there eventually led them back indoors to improvise together; something they did in total darkness to deprive themselves of all their senses except the crucial one – their hearing.

With Dysnomia, Dawn of Midi abandon improvisation in favour of composition, utilising sophisticated rhythmic structures from North and West African folk traditions to weave a sonic tapestry of trance-inducing grooves. From close up one may see only dots, but when stepping back an undulating image reveals itself.

Having supported Nils Frahm on his sold-out North American tour in 2014, Dawn of Midi will be joining their fellow label artist throughout Europe in spring 2015. Dysnomia will be released worldwide on June 1, 2015 through Erased Tapes – available on 2x LP, CD and Download.

“Stellar… at a loss for words” – Spin
“Something totally unprecedented” – Pitchfork
“Perverse in a good way” – The New York Times
“Brain-bending, seemingly impossible” – Rolling Stone
“Moving and addictive…a feat of innovation” – Interview Magazine
“A mysterious, vital sound with a pull all its own” – L.A. Times