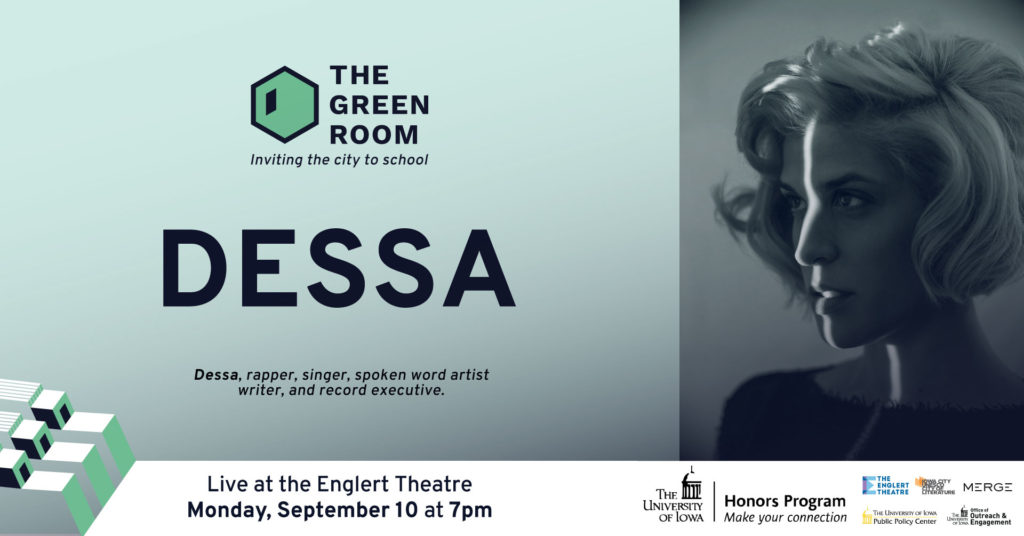 Inviting the city to school!

Ticketing: This event is FREE and open to the public. This event is general admission and subject to capacity. We encourage you to arrive early as lines will form. RSVP does not guarantee entry to event. We kindly request that you RSVP so we can gauge community response.

“Anger is just love, left out and gone to vinegar” – Dessa

Singer, rapper, and songwriter Dessa has made a career of bucking genres and defying expectations. The albums she’s released with Doomtree Records include rap bangers, a cappella arrangements, and big, catchy pop hooks. She’s co-composed for a 100-voice choir; contributed a track to Lin-Manuel Miranda‘s The Hamilton Mixtape; and recorded a cover “Balance” by Mountain Goats (Merge Records) that plays like a Bond theme. She performs in equally varied venues; she tours gritty rock clubs, velvet-lined theaters, and top-tier festivals like Glastonbury and Lollapalooza, but also takes special pleasure in dreaming up themed events for intimate rooms—such as her recent curation of a sold-out residency series at WYNC’s The Greene Space, in which Dessa matched lyricists with researchers who tackled scientific subject matter on stage. The LA Times says she “sounds like no one else;” NPR says she’s “breaking the rules of rap;” The Chicago Tribune simply calls
her “enchanting.” Dessa maneuvers through rooms and styles, working highbrow and low, with a commanding stage presence that attracts dedicated listeners at every stop.

Dessa’s work as a writer (with a byline that includes The New York Times Magazine, Ars Medica, an episode of the fictional cult-classic podcast “Welcome to Night Vale” and two literary collections of her own) imparts an unmistakable, crafted style to even her most cutting rap tracks. In 2017, Dessa made her orchestral debut: two sold-out evenings with the GRAMMY-winning Minnesota Orchestra. On stage at Orchestra Hall, she unveiled her most ambitious cross-disciplinary project yet: she’d assembled a team of neuroscientists to design an experimental protocol to try to fall out of love. Throughout the course of the evening, she performed a series of heartbreak songs she’d written about a long, difficult relationship, interspersed with moving, funny monologues that explained how her work with fMRI and neurofeedback technology targeted the centers of her brain associated with romantic love. Towards the end of each set, she premiered new material informed by the project. The lyrics of “Good Grief” investigate the idea of curative pain. “Velodrome” explores the limits of free will—no matter how hard we strive to change, some parts of ourselves may be ineligible for reform. Both songs appear on her new full-length record, Chime, to be released on February 23rd by Doomtree Records.

Producer and Doomtree cohort Lazerbeak partnered with composer, arranger, and GRAMMY nominee Andy Thompson to create and refine the album’s sound. The opening track “Ride” is noir, mean, sexy; “Fire Drills” was crafted from a snippet of an iPhone field recording Dessa made in Turkey; “Half of You” is infectious, uptempo pop; “5 out of 6” features a unusual looping riff that gives way to a gale-forcechorus that begins, I’m the phoenix…and the ash. Chime showcases Dessa at her finest—she’s fierce and tender, deft, and passionately curious.

Dessa grew up in the 80s in South Minneapolis as a strong-willed, brainy kid. Both parents were musical—her mother sang and her father played classical guitar and medieval stringed instruments. After earning a philosophy degree, Dessa began competing on the slam poet circuit. There she met members of the Minneapolis rap scene and was soon invited to join Doomtree, the hip-hop collective known for bold production, charismatic lyricists, and explosive live shows. Dessa learned from and contributed to the Doomtree ethos—a gritty, DIY attitude that presumed musicians would make their own way, without help from industry players. Doomtree members burned their own CDs, booked their own shows, wrote their own bios, and designed their own t-shirts. The songs on Chime are the product of Dessa’s unusual trajectory: she’s part academic and part rapper, a lute player’s daughter who spent her formative professional years touring the world in a van full of guys.

Making music that draws from varied sources without sounding contrived is difficult. But Dessa and her collaborators spent years honing exactly the skillset to do it well; Chime is as polished, honest, funny, fierce, and musical as anything she’s done yet. 2018 seems prime for a high-water mark, as Dessa tours Chime internationally, publishes her first hardcover collection with Dutton Books (Penguin/Random House), and reveals whatever surprises she’s working up next.

About The Green Room:
How does one community get smarter…
Employ that knowledge to uplift the lives of its residents…
Join with other cities and towns across the country…
And collectively change the world?

If you’re interested in finding answers to these questions, join us this fall for The Green Room, a University of Iowa Honors Program course and community-wide educational experiment open to all residents of Iowa City.

Taught by David Lynn Gould, The Green Room will meet at 7 p.m. on select Monday nights in August through October at The Englert Theatre. Find your community, share your thoughts, and join us for this one-of-a-kind, multi-dimensional learning experience. This event series is FREE and open to the public.