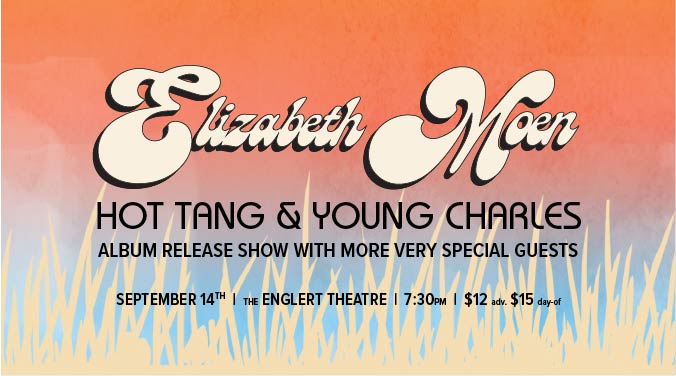 Elizabeth Moen will makes her first headlining appearance on the Englert stage with the release of her upcoming LP, A Million Miles Away.

Elizabeth Moen was raised in the small town of Vinton, Iowa, where she first taught herself how to play guitar. But it was thanks to the writing community in Iowa City that she was inspired to write her own songs and in September of 2015, she quit her three jobs to become a full time musician. Since then, she has taken the Midwest by storm. With the release of her first vinyl LP in 2017, Moen has toured the Midwest, Europe, and the West Coast as a solo performer and with her full band. Her song “Mars” is currently featured in a new Netflix original movie Candy Jar, starring Christina Hendricks, Uzo Aduba, and Helen Hunt. Moen recently released the first single from her upcoming album, “Time is a Sh**** Friend.”

Moen is no stranger to the Englert stage, having played with Lake Street Dive, Houndmouth, William Elliot Whitmore (featured on her LP), The Weepies, as well as on several Mission Creek Festival stages. Moen has also had the opportunity to play at many special festivals and venues such as 80/35 Music Festival, Camp Euforia Music Festival, several residencies with Sofar Sounds, The Tonic Room in Chicago, The Ruby Sessions in Dublin, Daytrotter, and many more! This fall, Moen will be releasing her sophomore LP titled, A Million Miles Away on vinyl in the US, and August in Ireland and the U.K.

“Elizabeth Moen is one of those rare artists whose voice, from the first moment you hear it, consumes your entire being, doing away with all previous thoughts and concerns, and leaving you short of breath.” – Culture Trip

Hot Tang is Iowa City’s only poolhaus band brought to you by Megan Buick on bass/vox, Anna Kahn on keys, and Jason Burkhardt on drums.

Young Charles’ debut album “Armageddon Party Dress” pushes indie folk rock to its extremes, to the off limits spaces on either side of it, where traditional motifs and themes contort into apocalyptic bliss. But wherever the sprawling songs on go, they’re always refracted through songwriter Mitch McAndrew’s own lens; it all comes out as a ray of light, slightly bent.
+ Google Calendar+ iCal Export