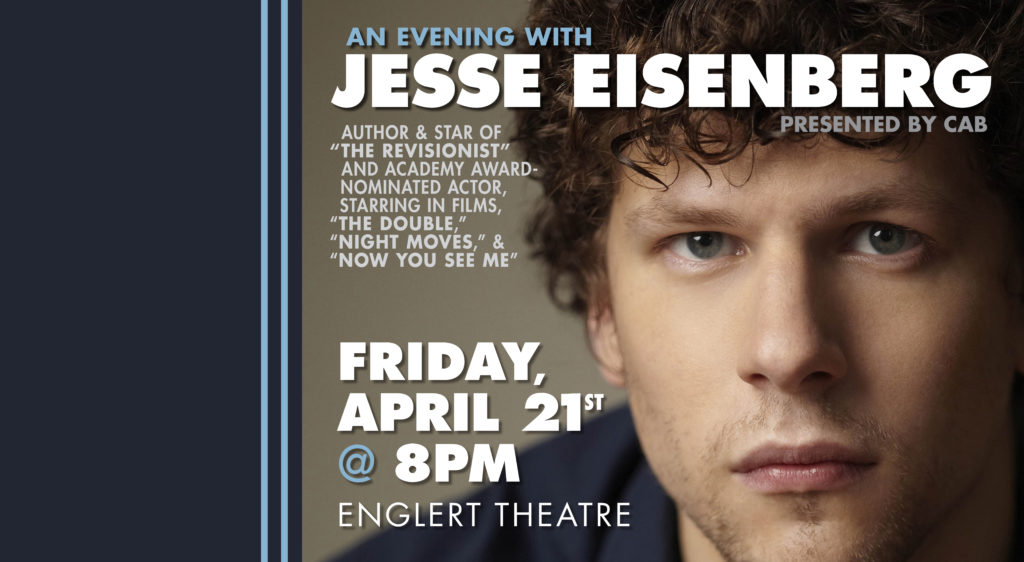 An Evening with Jesse Eisenberg

Ticketing: $10 student / $15 public in advance / $20 day of show for everyone! General Admission Seating + Fees
Purchase tickets at the Box Office or Online

Curly haired and with a fast-talking voice, actor Jesse Eisenberg is known for his Academy Award nominated role as Mark Zuckerberg in the 2010 film The Social Network. He has also starred in the filmsThe Squid and the Whale, Adventureland, The Education of Charlie Banks, 30 Minutes or Less, Now You See Me, and Zombieland. Additionally, he played Lex Luthor in the 2016 film Batman v Superman: Dawn of Justice.

Eisenberg joins us on the Englert stage Friday, April 21st at 8PM. The show will be opened by a University of Iowa student comedian, followed by a moderated Q&A consisting of questions gathered through email and social media prior to the event. Contact CAB with any questions!

Individuals with disabilities are encouraged to attend all UI-sponsored events. If you are a person with a disability who requires a reasonable accommodation in order to participate in these events, contact CSIL in advance at sarolta-petersen@uiowa.edu or 319-335-3059.