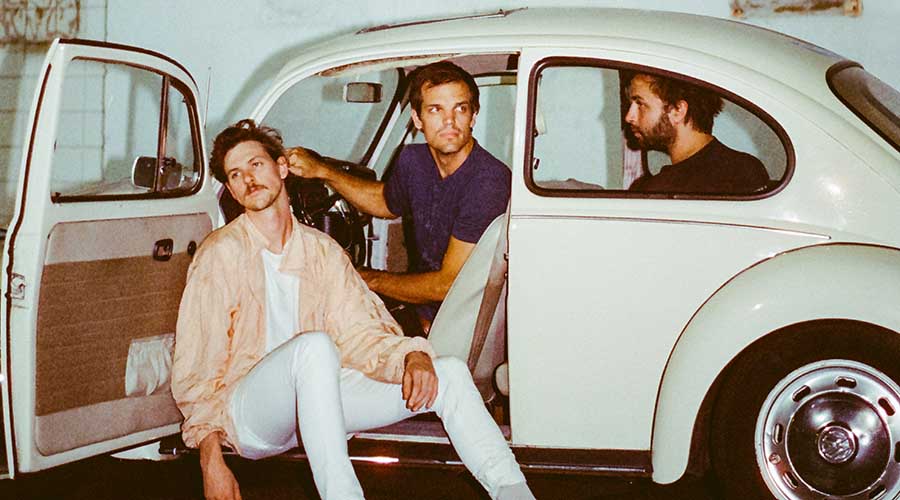 In the last four years, Houndmouth have learned what it means to be a band. On their second album, Little Neon Limelight, they wear that wisdom like a badge of honor.

Less than a half-decade ago in the small Indiana city of New Albany, four pals were crafting tunes on their own, with few ambitions of turning those songs into a spectacle. That all changed when these friends crossed paths, and joined forces. Matt Myers, Shane Cody, Katie Toupin, and Zak Appleby became the drums and keys, guitars and harmonies of Houndmouth, and those personal numbers became the irrepressible core of an outfit turned magnetic.

In 2012, the group issued a self-titled EP on Rough Trade Records, the legendary imprint that signed them after seeing a single gig. One of 2013’s most incandescent debuts, their From the Hills Below the City LP affirmed what label owner Geoff Travis had heard: the sounds of Americana, renewed by the youthful glow of songwriters, musicians and pals unafraid to both celebrate and desecrate them.

Others noticed, too. The Guardian noted that, with From the Hills, “reservations fade,” while Rolling Stone’s David Fricke lauded the “earthy melancholy with a rude garage-rock streak.” Treks with the Drive-by Truckers and the Alabama Shakes followed, plus performances at the Newport Folk Festival, Lollapalooza and Bonnaroo. In cramped clubs and big theaters alike, Houndmouth earned a reputation as a must-see act, their hooks, energy and charisma making them feel like a lifelong friend you’d just met.

That success, though, turned what had started as fun into something closer to work. Houndmouth learned that being full-time musicians required much more than the nine-to-five endeavors they had left behind in Indiana. But they grew into the role and grew from it. Experiences accumulated; perspectives expanded. Relationships stalled; others progressed.

“We’re not in party mode all the time anymore,” says Myers. “We’re refining how we write songs, writing about people we love, more important things than just nonsensical stuff.” If that was the charge, then Little Neon Limelight is an unapologetic success. These eleven songs sparkle, fade, and sparkle again, mixing innocence and experience, acceptance and aspiration, horror and hope.

Hailing from Cleveland, Ohio, singer and multi-instrumentalist Jenni Cochran grew up loving music. Going as far back as third grade, Cochran had a fire to write songs. Years later, while living in Vietnam, Cochran knew that she had to keep following music, that she needed her adventures to continue.
Growing up in Louisville, Aaron Craker learned to play guitar and keyboard at an early age. Eventually forming the band Dr. Vitamin, so named for his grandfather who discovered vitamin’s A and D, Craker dedicated himself to his craft. Running into Cochran at an improv acting group, the two hit it off and have stuck around since.
The rest was history. They spent time together. They wrote some songs, then a record, and then a few more. They worked with some friends before finding their drummer Dave Givan in 2015. Jake Hellman came in just last summer to carry the bottom end on bass, and brought a new found energy to the group. The band is their bond, formed on rock and roll through the lens of psychedelic garage pop, the Kinks or Beatles modernized with the hint of Western music teasing at the edges.
+ Google Calendar+ iCal Export