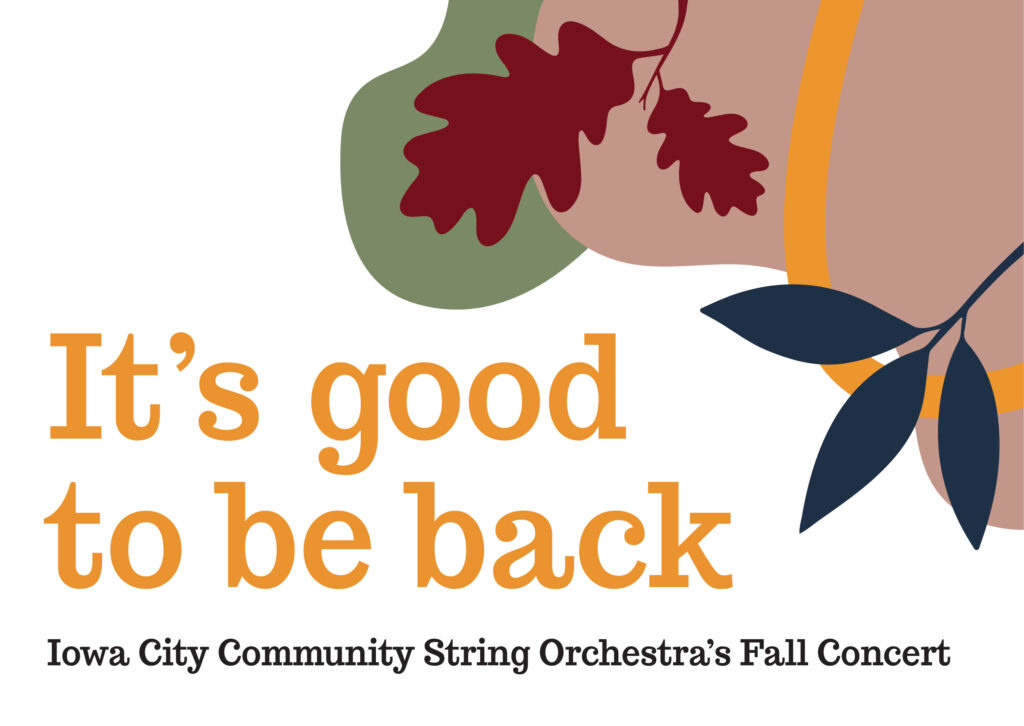 Philip Wharton – Oh, But Everyone Was a Bird
Michael Eckert – Suite for Strings
Antonin Dvorak – Slavonic Dance Op. 46, No. 2
Franz Schubert – Rondo in A Major, D. 836

In the fall of 1980, a dozen string players met to discuss the idea of starting a string orchestra to provide a reading and performance venue for local amateur and professional musicians. William Hibbard, a composer, violist, and then director of the University of Iowa School of Music’s Center for New Music, was the group’s first conductor. Prof. Hibbard remained the conductor until 1986.

The string orchestra’s first concert occurred in the spring of 1981, and two concerts followed in the spring of 1983. Thereafter, the orchestra has given two concerts during each academic year under conductors Allen Ohmes (1987-1997) and Carey Bostian (1998-present) with Don Haines (1986, 1998), Daniel Kleinknecht (2000), and Anthony Arnone (2001) as guest conductors.

The Englert Theatre in downtown Iowa City currently serves as the location for our concerts. Previously, the orchestra has given concerts at several local churches, Old Brick, the Masonic Temple, West High School, and Clapp Recital Hall.

The ICCSO has brought together talented and dedicated string players who are farmers, doctors, nurses, artists, university professors, public school teachers, students, computer programmers, administrators, social workers, pharmacists, translators, members of the business community, retirees, and more. Altogether, more than 300 string players have participated in the orchestra between 1980 and 2011. The orchestra has also maintained its commitment to concerts that are free and open to the public.

For some works on some concerts, the orchestra is enlarged to include wind and brass and percussion players, thereby enhancing the ICCSO’s repertory. The ICCSO has a long and rich tradition of providing a high quality musical outlet for area musicians who might not otherwise have an opportunity to play and perform, and of bringing live music to students and families in the Iowa City area. The orchestra added a summer concert for children in 2008 with “The Giant Jam Sandwich,” a book by John Vernon Lloyd and Janet Burroway, that was set to music by Philip Wharton.