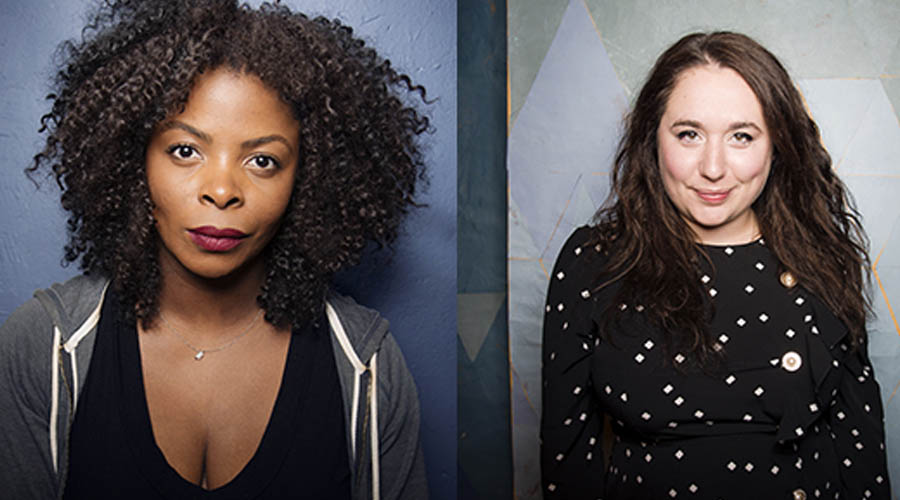 About Janelle James
Janelle James is a Caribbean-born comedian and writer. James was named a 2016 New at the Just For Laughs Comedy Festival in Montreal. Her unique perspective is a commentary on everything from family life, raunchy stories and morbid observations on depression and aging. While touring clubs around the country, James has been named one of the 50 Most Funny People in Brooklyn 2016 and has been featured for her outstanding performances in the The New York Times, Portland Tribune and Time Out Magazine. James can be seen on HBO’s CRASHING, @MIDNIGHT on Comedy Central and UPROARIOUS on Fuse (2016), and on Seeso’s NIGHT TRAIN WITH WYATT CENAC. In the writing space, James most recently was a writer on the BET talk-show, THE RUNDOWN WITH ROBIN THEDE. Last year, James toured with Chris Rock as part of his Total Blackout Tour 2017.

About Liza Treyger
Liza Treyger is a Chicago-bred standup comic who now resides in NYC. She really misses alleys, her favorite bartenders, and her Russian parents. Treyger most recently filmed her Netflix half-hour standup comedy special which is part of a new series called THE DEGENERATES. In 2015, Treyger released her first half-hour comedy special in addition to her first album with Comedy Central. She has performed at comedy festivals such as Just For Laughs Festival in Montreal, Clusterfest in San Francisco, and Moontower in Austin, Texas. Treyger has appeared on television series such as ADAM DEVINE’S HOUSE PARTY on Comedy Central, CHELSEA LATELY, and was a cast member on MTV2’s JOKING OFF. She was also a part of the 2012 New York Comedy Festival as one of Comedy Central’s ‘Comics to Watch’. Check out her super cool web series How Many Questions.

About Witching Hour
Presented by The Englert Theatre and Little Village Magazine, Witching Hour is a festival dedicated to exploring the unknown, discussing creative process, and presenting new work.

Each year, we welcome the brightest artists and thinkers pushing the boundaries of their respective crafts. Through performances, readings, discussions, workshops, and screenings, we engage what it means to be human in today’s world. Returning to downtown Iowa City on October 12 and 13.