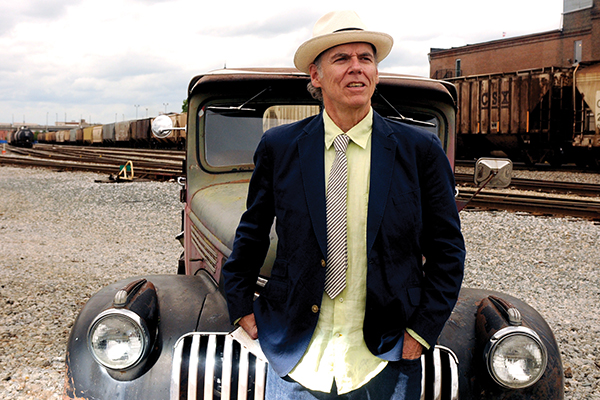 Forty years into his recording career, John Hiatt has chosen to title his 22nd studio album, Terms of My Surrender. Surrender? Is that as in Cheap Trick? Or Appomattox? Hiatt laughs, tentatively, at the choice.

“It’s my Appomattox,” he says, wryly. “Really I don’t know where it came from, that idea of trying to arrange the terms of my surrender. I don’t get to do that. It’s a labor in vain in that respect, if you think you can negotiate that with anyone, or anything. In reference to the title song, it’s in terms of love. You’ve got to give it up. The song says, ‘I can’t negotiate the terms.’”

That’s an essence, perhaps the essence, of the 11 songs here, the 11 stories they tell and, together perhaps, one story. Always a keen observer of life’s flings and foibles alike, usually mixed well together, Hiatt’s insights and skills at sharing them have only sharpened over the year.

With his longtime guitarist Doug Lancio taking the producer reins, Hiatt set out to bring the songs’ character (and characters) into intimate focus. There’s a close-up, patina-festooned bluesy quality tying the tales together. But it’s blues in the knotty backwoods sense, as if sprung from the Delta loam. It’s completely a band effort, his current group, which he calls simply the Combo, a tight-yet-loose unit from years together on the road — Lancio on guitars, banjo and mandolin, Nathan Gehri on bass, Kenneth Blevins on drums, with keyboards from John Coleman on some of the tracks. But it all flows from the leader.

“I had this group of songs and wanted to feature my guitar and voice — oddly enough,” he says. “However peculiar it might be, I thought, ‘Let’s put it out front and see.’”

Lancio agreed. They settled into his cozy studio, a “funky little place in East Nashville” as Hiatt describes it, for a set of unfussy, highly of-the-moment sessions, many of them essentially done in one basic take. Hiatt had in mind playing some rough-edged electric guitar for the core sound, but the producer thought acoustic would be a better fit for the songs. “I agreed,” Hiatt says. “And we ran it through the amp and it became the sound of the record — my voice and my guitar and that was the thing. You know, my singing, I’ve dropped down to a lower register. I’ve for a long time sung from the middle to the top, and this is kind of down from there. It seemed to work, fit the songs, fit the feel. And it’s easier to sing them, oddly enough.”

He pauses a second. “Plus I’m 61 and I don’t have that top range anymore.” Another pause, before the zinger. “I don’t have the top of anything.”

He’s not complaining, mind you. “Doesn’t bother me,” he says of his age. “Shit falls apart and I can’t remember anything, all that stuff. But the plusses outweigh the minuses for sure.”

That right there is a strong thread running through the album. The tales aren’t autobiographical, he stresses. But they are still, in many regards, his. “It’s more stories, storytelling, from different perspectives,” he says. But he allows, “I guess from a point of view. I guess it’s mine, if you want to put it that way, at a given time. It changes.”

He cites the song “Face of God,” in which the narrator asks how long he must suffer before seeing said face. It’s of course straight out of Christian theology, spiked with a line drawing on a Kenneth Patchen poem: “They say God is the Devil until you look him in the eye.”

“At the end he’s saying to his woman, ‘I’ve done enough, show me what you’ve got,’” Hiatt says. “That’s not the way I feel about things. This guy’s genuinely in some kind of struggle to lift himself out of whatever he’s struggling with. He’s got issues — issues with people who have big cars and show their wealth, while he’s coming in through the kitchen door. That’s definitely not me. I come in the kitchen door.”

Ditto for the guy on the prowl in “Baby’s Gonna Kick” — with the kicker line being that she’s “gonna kick me out” and the killer couplet of “listening to John Lee Hooker/Got my mind on a slow meat cooker.”

“Don’t know where that came from,” he says. “Kinda sexual. Kind of a frisky song — playful. I love the groove on that. That and a couple of other songs showcase Kenneth. What a great, fat bag he has, the way he leans back. Pretty bad-ass. Such a special feel. Been playing with him since 1987 and he just gets better and better.”

Hiatt too. The run of albums starting with 2000’s Crossing Muddy Waters through this new one is arguably the most consistently, fully realized expression of his considerable gifts as a writer and performer. Not to diminish his early accomplishments, of course. There are threads through his entire catalog tying the youthful energy of the early-‘80s statements Slug Line and Two Bit Monsters to the moving renewals of Bring the Family (with Ry Cooder, Nick Lowe and Jim Keltner collaborating) and Slow Turning later that decade to, well, all the work since.

Along the way his songs have attracted many other singers, through whom some have gained a wider world of fans via other artists’ versions — Rosanne Cash’s “Pink Bedroom” and most famously Bonnie Raitt’s hit version of “Thing Called Love.” And in recent years he’s done series of shows with Lyle Lovett, “our little Smothers Brothers comedy show,” that’s brought out other spins on his art, though elements already familiar to those who’ve been there all along. Alternately bemused and profound, he’s a self-aware chronicler of both his own and others’ stumbles and epiphanies, the tales richer with each step forward.

And it’s all steps forward, even if on Terms of My Surrender there are some looks back in the process.

“This record kind of hooked back up with the John the Troubadour Folk Singer Blues Guy,” he says. “I hadn’t really been doing that for a while. That feels good. Feels like a kid. And anything you can do to feel like a kid when you’re my age, you want to do it. It’s a good thing.”