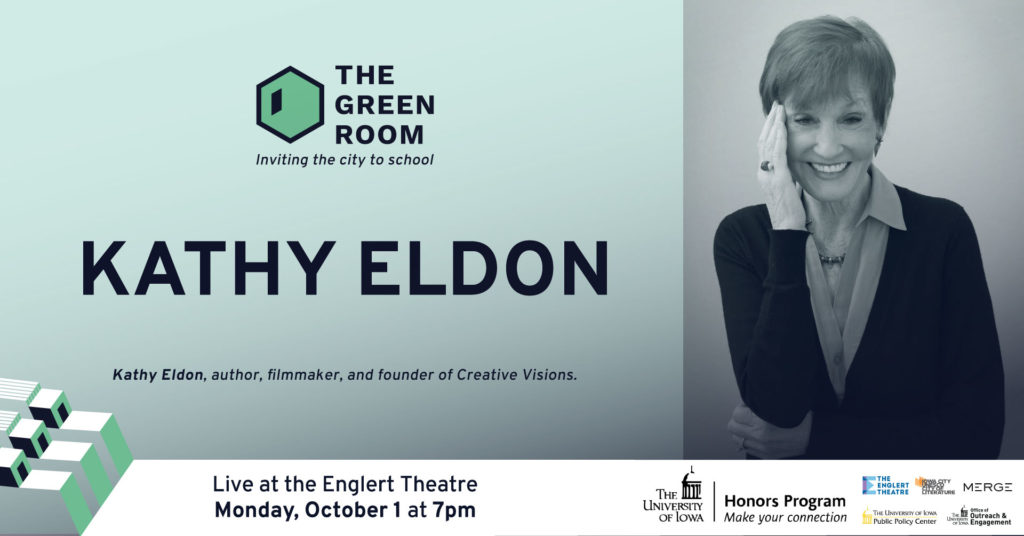 Inviting the city to school!

Ticketing: This event is FREE and open to the public. This event is general admission and subject to capacity. We encourage you to arrive early as lines will form. RSVP does not guarantee entry to event. We kindly request that you RSVP so we can gauge community response.

Born in Cedar Rapids, Iowa, and a graduate of Wellesley College, Kathy Eldon has worked as a teacher, journalist, author and film and television producer in England, Africa and the United States. In 1998 Kathy launched Creative Visions Foundation, inspired by the life of Kathy’s son, Dan Eldon – artist, creative activist and photojournalist killed at the age of 22 in 1993, while on assignment for Reuters in Somalia. Since 2004, the organization has acted as an incubator, accelerator and agency for more than 360 projects and productions by artists, filmmakers, playwrights and leaders of social movements who use media and the arts to ignite positive social change. Creative Visions, which has impacted more than 100 million people, has been recognized as a United Nations Non-Governmental Organization (NGO.)

In 1990, Kathy founded Creative Visions Productions to produce films that would inspire action. Her first feature, Lost in Africa, brought alive the horrors of ivory poaching in Africa. Since then, the company has produced many award-winning films, including Dying to Tell the Story, an Emmy-nominated TBS special about frontline correspondents; Soldiers of Peace, a Children’s Crusade, a CNN documentary focusing on the Children’s Peace Movement in Colombia, and Global Tribe, a cutting-edge PBS series featuring grass-roots global creative activists. Global Tribe inspired the development of Creative Visions Foundation’s Rock Your World, a free online human-rights based program that inspires and empowers middle and high school students to create media campaigns about local and global issues that matter to them. RYW has touched more than one million students in 72 countries.

Kathy was the executive producer of Extraordinary Moms, a documentary special about the power of mothers to transform the world, for the Oprah Winfrey Network (OWN). The film features actress Julia Roberts, former Secretary of State Hillary Clinton, correspondent Christiane Amanpour, talk show host Rosie O’Donnell and three lesser known (but extraordinary), mothers. After twenty years in development, Kathy produced The Journey is the Destination, a feature film about Dan, directed by Bronwen Hughes (Harriet the Spy, Forces of Nature, Stander) which premiered at the Toronto International Film Festival in 2016 with Maria Bello playing Kathy. Journey recently screened at the United Nations and is now on Netflix. The film is inspiring “Connection is the Solution,” a youth-focused campaign that will encourage young people to come together around critical issues and use their creativity to ignite action.

Kathy is the author of 17 books, including Angel Catcher, Soul Catcher and Love Catcher (Chronicle), a series of popular self-guided journals written with her daughter Amy that help people negotiate loss and grief; find their purpose and attract more love in their lives. Kathy, editor of a best-selling collection of her son Dan’s journals, The Journey is the Destination: The Journals of Dan Eldon, has also written popular cookbooks, travel and eating out guides and children’s social history books. In 2013 Harper One published her memoir, In the Heart of Life. Kathy is currently working on a multi-media project, Activate your Soul, that will include podcasts, online seminars and conversations with individuals have chosen to live, not only for themselves, but also for others.

Kathy has been profiled in a number of books, including Arianna Huffington’s On Becoming Fearless, Those Who Dare; Real People, Real Courage; Fearless Women and; most recently, 200 Women, published in 2018. The PVBLIC Foundation chose for her for their 2015 Media for Social Impact Award at the United Nations. Los Angeles Confidential Magazine named Kathy and Maria Bello as one of “Los Angeles’ Most Influential Female Power Duos.” On Nelson Mandela’s Birthday in 2013, Kweku and Ndaba Mandela nominated Kathy for the George H.W. Bush “Points of Light” award. Kathy also received a grant of $25,000 for Creative Visions after winning Unite4Humanity’s Inspiration Award in the Arts at a ceremony in the presence of President Bill Clinton. She was named one of MSN’s “10 Amazing Women You Have Never Heard Of,” together with Nobel Peace Prize winners Wangari Mathai and Jodi Williams and received the Euro-American Women’s Council Artemis Goddess Award for her work with young creative activists.

Kathy, a popular speaker (with two TEDx talks including “The F-Word Transformed” – about Forgiveness), has been featured on countless television and radio programs globally, including several appearances on Oprah and a segment on Oprah’s “Producer’s Favorites.”

Kathy lives in Malibu with her husband, designer Michael Bedner, next to her daughter Amy Eldon Turteltaub with whom she has collaborated on many of her projects, and her family, a few steps away from the Dan Eldon Center for Creative Activism, a vibrant hub for individuals who want to help change their bit of the world for the better.

About The Green Room:
How does one community get smarter…
Employ that knowledge to uplift the lives of its residents…
Join with other cities and towns across the country…
And collectively change the world?

If you’re interested in finding answers to these questions, join us this fall for The Green Room, a University of Iowa Honors Program course and community-wide educational experiment open to all residents of Iowa City.

Taught by David Lynn Gould, The Green Room will meet at 7 p.m. on select Monday nights in August through October at The Englert Theatre. Find your community, share your thoughts, and join us for this one-of-a-kind, multi-dimensional learning experience. This event series is FREE and open to the public.