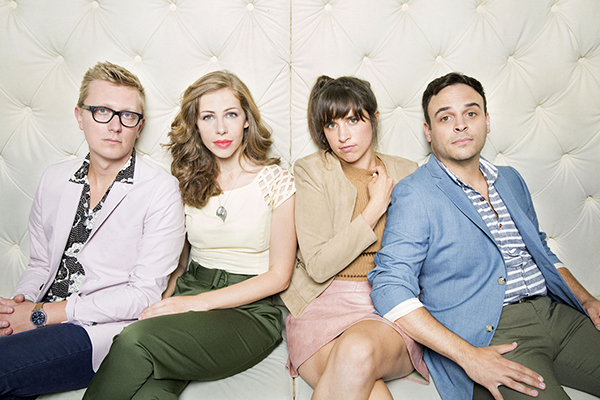 Join us for a special ticketholder-only pre-show cocktail party before Lake Street Dive’s performance at the Englert! From 4 to 6 p.m., all-you-can-eat appetizers from 2016 Downtown Iowa City Top Chef Sepehr Sadrzadeh will be served along with a complimentary house-made cocktail upon your arrival and a beer or wine of your choice after. Cocktail party tickets are $20 (plus fees) and are sold separately from the performance ticket. Your performance ticket alone does not grant access to this event.

A “side pony,” the hairstyle that Lake Street Dive’s Nonesuch debut is named after, is the kind of one-sided Cubism-worthy ’do that requires unwavering self-confidence to pull off. The foursome is not referring to the demure, swept-to-the-side fashion Taylor Swift occasionally sports, but more the outré look of, say, Napoleon Dynamite’s friend Deb. However, a side pony, for them, is really a metaphor for their philosophy and personality as a band, one that seamlessly incorporates R&B, pop, ’60s-era rock, and soul into a unique, dance-party-ready mix. As bassist Bridget Kearney puts it, “When we were settling on the album title, that one just stuck out to us as embodying the band’s spirit. We’ve always been this somewhat uncategorizable, weird, outlying genre-less band. That’s the statement we wanted to make with this record: be yourself.”

Guitarist and trumpeter Michael “McDuck” Olson echoes her sentiment: “It came to mean something larger to us than the original image. The line, ‘I’m just living my life, I rock a side pony’ has a literal connotation: ‘Don’t judge me for my silly hairstyle.’ But it has also come to mean anything you’re doing for the sheer joy of it. We have always ‘rocked our side pony.’ Now we have a convenient phrase for it.”

The members of Lake Street Dive—named after an avenue of seedy bars in Olson’s native Minneapolis—met in 2004 as students at Boston’s New England Conservatory of Music. Powerhouse singer Rachael Price fronted the quartet and drummer Michael Calabrese filled out the rhythm section. Though they were all studying jazz, their work together took an altogether different shape, informed by their love of classic pop, particularly from the ’60s, when pop could mean the Beatles, the Supremes, Dusty Springfield, or the Beach Boys. They recognized the virtuosity—and timelessness—in the efforts of studio musicians like Muscle Shoals’ legendary Swampers and L.A.’s Wrecking Crew. Similarly, their original repertoire combined musical sophistication with an easy going groove.

For several years, the group was a part-time proposition, with everyone living in different cities. (Calabrese and Olson eventually returned to Boston, while Price and Kearney migrated to Brooklyn.) In 2012, Lake Street Dive became a full-time combo after a YouTube video of the quartet acoustically performing the Jackson Five’s “I Want You Back” on a suburban Boston street corner went viral. The arrangement was slowed-down and torchy, a little melancholic, more late-night New Orleans jazz than AM radio pop, and upwards of three million people were enchanted by it.

Producer T Bone Burnett, as impressed as everyone else, invited Lake Street Dive to perform on the 2013 Another Day, Another Time concert event he curated at New York City’s Town Hall to celebrate the Coen brothers’ folk revival-themed movie, Inside Llewyn Davis. Lake Street Dive made the most of its one-song slot, with its performance of the Olson-penned “You Go Down Smooth,” garnering morning-after acclaim from the New Yorker, the Daily News, and the New York Times. The band looked striking too, like a retro lounge band that could have sprung from the surreal imagination of David Lynch. That star-making moment has been preserved on the Nonesuch soundtrack to Showtime’s documentary of the concert.

Side Pony, recorded in the winter of 2015, has an exhilarating feel from start to finish. For listeners familiar with Lake Street Dive, it’s a natural evolution of the band’s sound. The arrangements offer a knowing nod to the past while the lyrics tackle the pitfalls of modern romance in a manner that’s often more playful than rueful. And Price’s vocals have a teasing swagger to them. Neither her heart nor her hairstyle will be messed with.

Singer Price agrees: “We’re the happy breakup band. We like to write about our lives and real things but we always like music that makes you dance and lifts you up. And those things don’t need to be separate from one another. A sad song doesn’t need to be in a minor key and slow. That’s something we try to blend and do as much as possible.” The album track “Spectacular Failure,” she notes, is sort of a “cheerful parody” of a hapless lothario. “The story and specifics aren’t true but it was inspired by a real person who we turned into this mythical, terrible character.”

Side Pony is produced by the eclectic Nashville-based Dave Cobb, whose credits include Sturgill Simpson, Chris Stapleton, and the Secret Sisters. Cobb’s working method was to keep the recording fast and loose, as live-in-the-studio as possible, and to embrace the unorthodox.

This provided Lake Street Dive with a welcome challenge: an opportunity to experiment with sound and arrangements and to collaborate on songwriting in a way the band had never attempted before. For earlier discs, the band members each wrote their own material and by the time they’d all arrive in the studio, the songs would have been meticulously arranged—and then the group would simply record them.

But Cobb encouraged them to bring only the most basic demos. The band showed up in Nashville with a lot of ideas, 28 songs, for their first session, and quickly discarded more than half. After a break from recording to go tour Australia, the process took an even more freewheeling turn as the band labored collectively to come up with the final cuts for the disc, including the title track, the infectious sing-along “Hell Yeah,” and the early ’70s-styles funk of “Can’t Stop.”

At one point, Cobb encouraged the band to scour the dollar bins at used record shops, and then spin their finds in the studio, dropping the needle at random in search of inspiration. “Can’t Stop,” in particular, grew out of that exercise, spurred on by the wobbly sound of a warped old soul record they’d unearthed.

Kearney explains, “Dave wanted us to come without any preconceived idea of how we were going to do the songs, so we made only campfire-style sketch demos—me, McDuck, and Mike strumming guitar and all of us singing the melody. We could then easily slow a song down, change the chorus to minor—we could make some pretty broad strokes in the studio, just following a much more intuitive approach to finishing a song.” She deadpans, “We used to be stiffer, more analytical conservatory kids. Now we like to use our conservatory skills for good, not evil.”

Calabrese adds, “We would be working on a tune, trying stuff out, and Dave would stop us in the middle of the song and say, ‘Let’s try it this way instead.’ His process was mercurial, changing direction quickly, going from ‘we don’t have anything’ to ‘we’ve got it!’” He continues, “We weren’t always so sure. But then we’d listen to a comp and we’d agree that he’d heard something we hadn’t. That’s what good producers do: they capture lightning in a bottle.”

Price says, “We realized working in the studio this way that we each have our own strengths: Bridget is a really fantastic lyricist. She’s fast and she can come up with a lot of ideas. McDuck is the same way with harmony, with changes and chords. He can come up with a lot of options in a short period of time. It was great to see, through this particular recording process, how beautifully our individual strengths complement each other.”