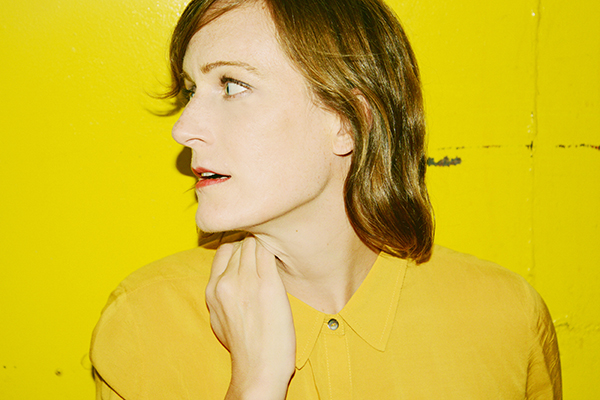 Presented by Little Village Mag | Intimate at the Englert Series

Ticketing:  SOLD OUT / $5 Balcony Seating (NOTE: balcony tickets will go on sale at the door beginning 7 p.m. Thursday, May 19th. There will be no overflow seating available on stage.) + Fees
Intimate at the Englert Series patrons will be on stage for this event. 70 tickets will be sold. A limited number of chairs will be available (seating not guaranteed). Please contact the Box Office (319-688-2653) with any accessibility concerns/questions. The Intimate Series is presented by Hands Jewelers, with additional support from Little Village.
Purchase tickets at the Box Office or Online

“You must go change your life.”

Those words by Rainier Marie Rilke followed Laura Gibson as she boarded a train in the summer of 2014, the Empire Builder line that took her from Portland toward New York City. Ahead was an MFA program in creative writing and uncertainty; behind was a boyfriend, a close-knit family and music community, a city that fanned her songwriting and her life. It was a story that she had already written traded for countless blank pages. The train wheels scraped against the rails, shearing off a layer of dust, a rolling tabula rasa.

Back in Portland she had already started writing a new batch of songs, recording demos with engineer John Askew (The Dodos, Neko Case). She planned to finish in New York, but her entrance to the city was bumpy. Securing a fifth floor apartment in the East Village, Gibson continued work on the new songs and began her program at Hunter College, even as her long distance relationship started to suffer. Shortly after she arrived, she broke her foot, effectively barring her in the apartment while it healed. The songs she had begun to write and record in Portland began to feel more important, a way of understanding her situation. A new record was taking shape.

I changed my name the day I left

I cut my hair, I hemmed my dress

I was damn sure about it

You were playing piano in an empty room

On breaks from school, Gibson returned to Portland to continue recording in Askew’s studio, and with violinist/composer Peter Broderick on the Oregon Coast. Her rhythms were emerging in the studio, and in New York she was getting settled.

A fire changed all that. On March 26, 2015, Gibson’s East Village apartment building was consumed by a gas explosion and burned to the ground. Two people lost their lives, more were injured, and most were displaced. Gibson escaped unharmed, but in the wreckage was every piece of the life that she brought with her: the notebooks filled with lyrics, her instruments, including the guitar she had played on every album, every ID card and piece of paper that detailed who she was.

She bounced around. She slept on couches. Friends and fans and fellow musicians near and far supported her with guest beds, financial assistance, and encouragement. In the midst of trauma and recovery, the very act of writing and re-writing her lost lyrics connected her to who she was, and where she was going.

As the songwriting came together, the music and recordings did too, as Gibson gathered a band of her closest friends and most admired peers: Dave Depper (Death Cab for Cutie, Menomena) took up guitar and bass, building ambient loops. Drummer Daniel Hunt (Neko Case) layered percussion, and Broderick added string sections and sang with a sensitivity to match Gibson’s own silver voice. Contributors like Nate Query of The Decemberists and the singer/songwriter Alela Diane rounded out the studio time. Sharing the role of producer, Gibson and Askew pushed forward. What emerged is Gibson’s most personal record to date.

It is impossible to miss the effects of Gibson’s fiction studies on her songs. She writes with the narrative precision and imagery of Marilynn Robinson or Rilke, circling simple truth with powerful images, never sacrificing style for clarity or vice versa. On title track “Empire Builder” Gibson keeps a spare arrangement that makes uncommon use of space as the keys and guitar shimmer and flow, punctuating on the downbeats as she sings,

But you never liked it when I play dead

It is an album about womanhood; about looking your own ambition in the face and wondering whose eyes are staring back (“Not Harmless”), about the crushing certainty that nothing is certain (“Damn Sure”).

Gibson reflects, “This time around I didn’t wanted to settle for abstract phrases or leave things open to poetic interpretation. I fought harder to make the story clear, and I guess by story, I mean my own.”

A narrative made of a hundred moving parts, Empire Builder is suspended in the intricate moment between loss and recovery, a map to go forward, with pins in all the places we’ve left, and more in the places we’ve yet to go.

Inspired by the lyrical depth of The Mountain Goats and the DIY grandeur of Grandaddy, John Lindenbaum and Andre Perry formed The Lonelyhearts in 2003. Equally energized by a local scene that featured a wide array of bands like Film School, John Vanderslice, and The Coachwhips, Lindenbaum and Perry decided to make their mark by limiting themselves to just a 12-string acoustic guitar and a synthesizer in the live setting while employing more varied instrumentation in the studio. Having played in louder, wilder bands, the new format exacted a focus on narrative songwriting and making the most sound possible with just two instruments and two voices. What has evolved over the last 13 years is a distinct aesthetic, an atmospheric kind of Americana that is interested in telling familiar human stories with non-traditional sounds. Perry currently lives in Iowa City, Iowa, and Lindenbaum resides in Fort Collins, Colorado. Age of Man is their fourth full-length album.

Alexis Stevens is a Nashville-based songwriter. Originally from Iowa, she has lived and played music in Eugene and Portland, Oregon, and Los Angeles, California. She returned to her Iowa roots in 2008 and independently released her debut album, Flood or Drought, that same year. Over the next four years, Stevens continued to hone her songwriting, culminating in 2012’s self-titled second album. Her writing is one part needle work and one part ariel photography, as heartbreaking human experiences are patchworked onto beautifully rendered midwestern scenes, creating an enduring portrait of love, loss, and landscape. Stevens relocated to Nashville in early 2013.