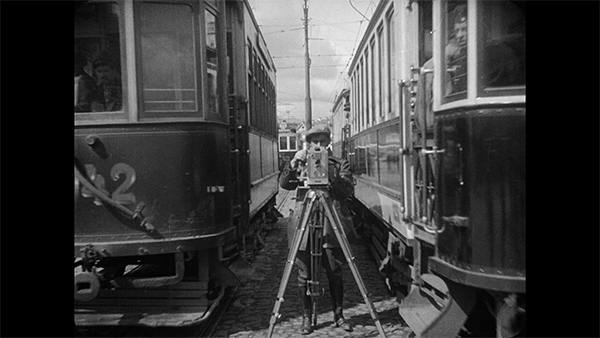 A post-screening reception for Friends of the Englert, FilmScene Members, and VIPs will be held at FilmScene. Details to follow. If you are interested in becoming a Friend of the Englert please click here or contact the Box Office (319-688-2653 or email info@englert.org).

Performing at prestigious film festivals and cultural centers in the US and abroad (The San Francisco Silent Film Festival, The Telluride Film Festival, The Louvre, Lincoln Center, The Academy of Motion Pictures, the National Gallery of Art and others), Alloy has helped revive some of the great masterpieces of the silent era.

About Man with a Movie Camera:
This playful film is at once a documentary of a day in the life of the Soviet Union, a documentary of the filming of said documentary, and a depiction of an audience watching the film. Even the editing of the film is documented. We often see the cameraman who is purportedly making the film, but we rarely, if ever, see any of the footage he seems to be in the act of shooting!

The presentation will feature a magnificent new restoration of the film with Alloy’s groundbreaking original score, derived from Vertov’s notes to his composer for the premiere of the film in 1929. The restoration is is so gorgeous, sharp, and full of detail, it’s like seeing the film for the first time.