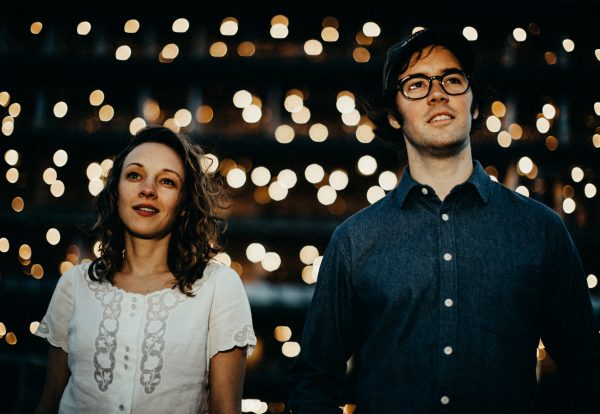 An Evening with Mandolin Orange

“Mandolin Orange has been quietly gathering local and faraway fans since its debut album was released back in 2010. The North Carolina duo’s music — laced with bluegrass, country and folk — is often wistful and contemplative without being somber, and always firmly grounded in the South.” – WNYC Soundcheck

Lean in to Mandolin Orange’s new album, Blindfaller, and it’s bound to happen. You’ll suddenly pick up on the power and devastation lurking in its quietude, the doom hiding beneath its unvarnished beauty. You’ll hear the way it magnifies the intimacy at the heart of the North Carolina duo’s music, as if they created their own musical language as they recorded it.
“We talked about the feel of each song and pointed out loosely who was going to be taking solos, but it was mostly a lot of fresh takes, a lot of eye contact, and a lot of nods and weird winks,” says Andrew Marlin, who anchors the band with fellow multi-instrumentalist and singer Emily Frantz.

Due Sept. 30 on Yep Roc Records, Blindfaller builds on the acclaim of Mandolin Orange’s breakthrough debut on the label, 2013’s This Side of Jordan, and its follow-up, last year’s Such Jubilee.

Since then they’ve steadily picked up speed and fans they’ve earned from long stretches on the road, including appearances at Austin City Limits, Telluride Bluegrass Festival, Newport Folk Festival, and Pickathon. It’s been an auspicious journey for a pair who casually met at a bluegrass jam session in 2009.

As the duo’s songwriter, Marlin sharpens his lyrical prowess here, touching on broad themes of growing older and feeling helpless in a world torn by injustice. Sure, the album sounds classic, but it is rooted in the here and now of our daily headlines.

Take “Gospel Shoes,” a gimlet-eyed critique of how politicians have used faith as a weapon. “Freedom was a simple word, so reverent and true/ A long time ago, it meant the right to choose/ Who you love and how to live, but now it’s so misused/ And twisted by the politics of men in gospel shoes,” Marlin sings.

“When we finished ‘Such Jubilee,’ I started writing these songs with a different goal in mind. I thought about how I would write songs for somebody else to record,” Marlin explains. “I ended up with a bunch of songs like that, but we chose ones that I still felt personally connected to.”

“We really chose everybody who played on the record, because we trusted them,” he adds.

“We’ve always liked to record fairly live,” Frantz says, “and it’s pretty easy to do that when it’s just Andrew and me. So it was fun to hone in on the guys who played on this record.“We really jelled as soon as we got into the studio, and everyone’s playing was driven by intuition instead of details orchestrated in advance.”

Holed up at the Rubber Room studio in Chapel Hill, N.C., they laid down the tracks in a week between touring. They’ve always been keen on the notion that drawn-out recording sessions don’t necessarily yield better results. A good song, and just one good take, will always shine through any studio sorcery.

For Frantz, Blindfaller, which Mandolin Orange produced, was something of a turning point.

“Now that we’ve put out quite a few records and toured so much, I think a standard has been set and people expect a certain thing,” she says. “But you don’t want to get into a place where you’re just making the music you’re expected to make. You have to push yourself a little bit.”

The passage of time, and the regret that often accompanies it, courses through these songs. “When did all the good times turn to hard lines on my face/ And lead me so far from my place right by your side?” Marlin ruminates on “My Blinded Heart.”

In fact, there’s heartache by the numbers on Blindfaller. If you didn’t know better, you’d swear “Picking Up Pieces” is a tearjerker George Jones or Willie Nelson sang back in the early 1970s. It’s a Mandolin Orange original, of course, and also a poignant reminder of the economy and grace with which Marlin imbues his songs – say what’s important and scrap the rest.

A country dirge with soulful washes of pedal steel and mandolin, “Wildfire” details the the lingering, present-day devastation of slavery and the Civil War, with Marlin’s voice locking into close harmonies with Frantz on the chorus. “Take This Heart of Gold” opens with perhaps the best classic-country line you’ll hear all year: “Take this heart of gold and melt it down.” (Marlin admits it was inspired by a Tom Waits lyric he misheard.)

But there’s also room for detours. Straight out of a honky tonk, “Hard Travelin’” lets the band shift into overdrive. A freewheeling ode to life on the road, it had been kicking around for a while but never fit on previous releases.

As for the album title, it’s meant to evoke a sense of wonder, of contemplation. A “faller” is someone who fells trees, and in this case that person is blind to his/her own actions and those of the world. The spectral cover photo, by Scott McCormick, is open to interpretation, too: Either those trees are engulfed in flames or sunlight is pouring through them. It’s up to you.

“We wanted different vibes and different intuitions on these tracks,” Marlin says, “and I feel like we really captured that.”