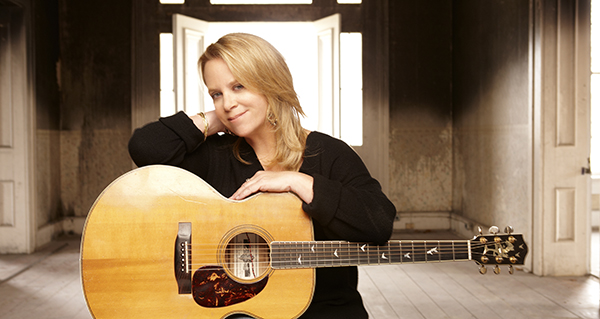 This fall, five-time Grammy Award-winning singer-songwriter and 2012 Nashville Songwriters Hall of Fame inductee Mary Chapin Carpenter continues her unique series of intimate, acoustic performances with A Special Acoustic Evening with Mary Chapin Carpenter. The tour will bring the singer-songwriter to intimate venues, capping a year that has seen the ensemble perform across the United States, Canada, the United Kingdom, and Australia.

The critically acclaimed tour marks Carpenter’s return to singing both timeless hits and deep cuts from her expansive and beloved 13-album catalog after performing with orchestras in 2014.

Carpenter spent most of 2014 performing alongside world-renowned orchestras since the release of her debut orchestral album, Songs From the Movie (Zoë /Rounder), which was conducted and arranged by six-time Grammy Award winner Vince Mendoza. Carpenter’s world debut orchestral concert took place on January 24 at the Glasgow Royal Concert Hall alongside the BBC Scottish Symphony Orchestra. In March, she performed two milestone concerts at New York’s Lincoln Center with the New York Philharmonic, conducted by Mr. Mendoza, and was joined by special guests Joan Baez, Shawn Colvin, Jerry Douglas, Tift Merritt and Aoife O’Donovan.

Over the course of her career, Carpenter has sold over 13 million records. With hits like “Passionate Kisses” and “He Thinks He’ll Keep Her,” she has won five Grammy Awards (with 15 nominations), two CMA awards and two Academy of Country Music awards for her vocals. Her songs speak to the most personal of life’s details and the most universal.