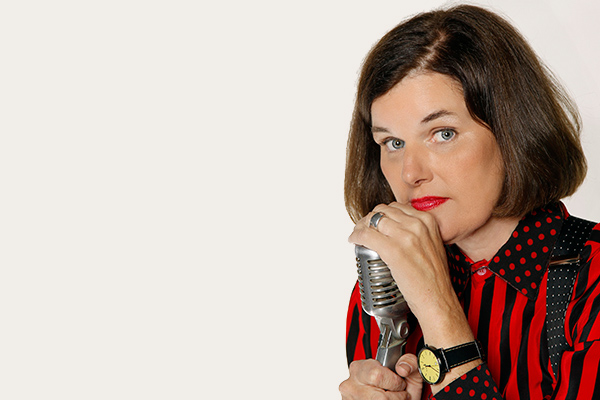 “At the top of her game…” (San Francisco Chronicle)

25 years ago Paula Poundstone climbed on a Greyhound bus and traveled across the country — stopping in at open mic nights at comedy clubs as she went. A high school drop-out, she went on to become one of the great humorists of our time. You can hear her through your laughter as a regular panelist on NPR’s popular rascal of a weekly news quiz show, Wait Wait… Don’t Tell Me. She tours regularly, performing standup comedy across the country, causing Bob Zany with the Boston Globe to write: “Poundstone can regale an audience for several hours with her distinctive brand of wry, intelligent and witty comedy.” Audience members may put it a little less elegantly: “I peed my pants.”

While there is no doubt that Poundstone is funny, the thing that probably separates her from the pack of comics working today and that has made her a legend among comics and audiences alike is her ability to be spontaneous with a crowd. Poundstone says: “No two shows I do are the same. It’s not that I don’t repeat material. I do. My shows, when they’re good, and I like to think they often are, are like a cocktail party. When you first get there, you talk about how badly you got lost and how hard it was to find parking. Then you tell a story about your kids or what you just saw on the news. You meet some new people and ask them about themselves. Then, someone says, “Tell that story you used to tell,” and then someone on the other side of the room spills a drink, and you mock them. No one ever applauds me when I leave a party, though. I think they high five.”

Paula’s interchanges with the audience are never mean or done at a person’s expense. She even manages to handle politics without provoking the pall of disapproval less artful comics have received.

Her newest comedy CD, I HEART JOKES: Paula Tells Them in Boston was recorded during a performance at the Wilbur Theatre in the heart of the city and was released on April Fool’s Day 2013.