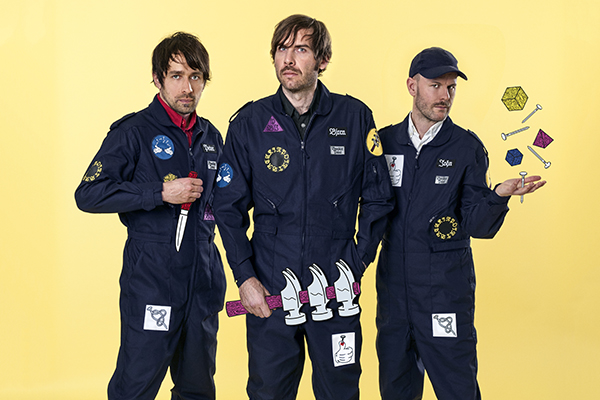 It’s been five years since Peter Bjorn And John have wowed the world with their musical talents. During a fruitful period of disappearance, the trio have built their own studio, started a record label, and toiled to perfect a formula for effortless sounding pop music that (spoiler alert!) has taken them a huge amount of effort. Something else happened, too. The rise of Swedes in music scenes around the globe gained huge traction. From Avicii and Swedish House Mafia to Lykke Li and Robyn, the flag for Scandinavian genius flew. But one (or –more accurately – three) names were missing: those of Peter Moren, Bjorn Yttling and John Eriksson.

The gang of childhood friends who once bonded over a love of ‘60s baroque pop and Stone Roses famously broke the mould an entire decade ago with one of the catchiest songs to feature whistling ever – ‘Young Folks’. But as bassist and production whizz Bjorn says, ‘Young Folks’ was not a curse upon a career that is on the verge of entering its seventh era with forthcoming album ‘Breakin’ Point’. “Seven albums seems like an awful lot,” reflects Bjorn. “But we put them out during a long period so it’s OK!”

‘Breakin’ Point’ is about the band’s newfound search for another career high. “We started with some other album title ideas – like ‘Thriller 2’. Then we realised we were pushing the envelope so got into the idea of a breaking point. If we broke it once, we can break it twice,”says Bjorn. That’s why the album artwork features a hammer with three heads on it, not just to strike your nightmares, but to send a message out to everyone. “It says – ‘We’re back! We’re smashing it!’ Haha.” In the literal sense, they may be wielding hammers, but how about musically? “Musically, a breaking point is just about working so hard until you know you can’t do any more,” says Bjorn. “It’s about being in that fog when you’re creating where you can’t see. That’s when you find something – the door home, or the door out. You get a chance to turn it around. You have to really put yourself in a big mess to be able to go somewhere new.”

The trio’s previous record ‘Gimme Some’ wasn’t exactly a big mess, it was Peter Bjorn And John’s “power pop, guitar statement”, focused on recreating in the studio what they were confidently doing live. Having established that ground for themselves, they wanted to do the total opposite of that this time around. “This was about doing big pop songs,” says Bjorn, who recalls sitting around listening to ABBA with his bandmates, marvelling at how they made it sound and look so easy.

‘Gimme Some’ was also the first of Peter Bjorn And John’s first records to feature an outside producer. ‘Breakin’ Point’ sees the threesome high on that socialising bug, inviting a whole host of others to join them aboard the good pop/rock ship. Together these outside influences have helped the band realise their dreams of creating era-defining, dance floor appropriate indie pop that intends to affect people on a deeper level. It’s about the tropes of life, the difficulties that come with maturing. “There are very few songs in our collection that are positive. I can’t think of one,” laughs Bjorn. “It’s always been about the blues. Life is shit, but tonight is nice – that’s what pop is, especially the songs that we love. You wanna have some darkness to be able to see the light. That’s how we do it up here in Sweden! It’s like a black and white movie if you look out: snow and a black mass of darkness.”

Indeed, opening track and album highlight ‘Dominos’ is a piano disco anthem about working for the Man. The track ‘Hard Sleep’ and title track ‘Breakin’ Point’ are about abandoning life’s small trivialities and embracing newfound fatherhood. //You’ve been hiding in the bosom of my dream, now the clock sets the scene// go the lyrics.On ‘A Long Goodbye’ the guitar riff is reminiscent of Blondie classic ‘Heart Of Glass’. “Yes I can hear that,” agrees Bjorn. “But we haven’t sampled it so you can forgive us for that.”

Bjorn comments on how they didn’t need to go too far to find their collaborators – the alternative music community had naturally begun to hang out more in Stockholm. “So we started to see more people more regularly,” he says. They met Patrik Berger first. At the time he was working with Icona Pop and Robyn. “We knew he was in a punk band before. We were looking for people who wanted to make hits that also had that rock influence.”

Thankfully they also had the likes of Paul Epworth (Florence And The Machine, U2, Paul McCartney), Greg Kurstin (Sia, Adele), Emile Haynie (Lana Del Rey, FKA Twigs, Kanye West) and Pontus Winnberg (Miike Snow) to help guide them. “You behave better when you have people over for dinner that aren’t just your family,” he says, proverbially. “It wasn’t that we just brought in anyone. We really respect what these guys do. We wanted to make pop music that was relevant now and not in a fantasy world of what we thought would be relevant. We learned how to not dwell on stuff because you can’t sit forever. You have to reach a goal. That was a little bit scary at first.” One fulfilled goal was to have their own built studios in Sweden, studios that were formerly used by ABBA. It’s also the site of the trio’s new label INGRID.

Despite their fears, the collaborating also reasserted their own winning sense of self-confidence. “Well, you realise you know some stuff yourself too!” laughs Bjorn. “That made us cocky.” Peter Bjorn And John intend for these songs to be consumed on the radio, in live shows and – most importantly – on the dance floor. “Like ABBA would though, it’s not like we’re going for the Avicii thing. In a nice pub, you know?” says Bjorn. “We definitely want it to be like Prince’s version of a dance floor song. Everything should be groovy and funky.”

Having been together almost 20 years, Bjorn is still unsure as to what their secret is. “Exercise!” he jokes. “We all have different ideas and those have to live close to each other. That’s what makes it an interesting mould. If you mix two similar ingredients you’re not gonna get a good result. You have to have a little pepper and salt to get a good dish.” Indeed, just like their culinary acronym counterpart – P B & J (peanut butter and jelly) – Peter Bjorn And John are a meld of three disparate and unique elements. Together, they’re both classic and delicious.