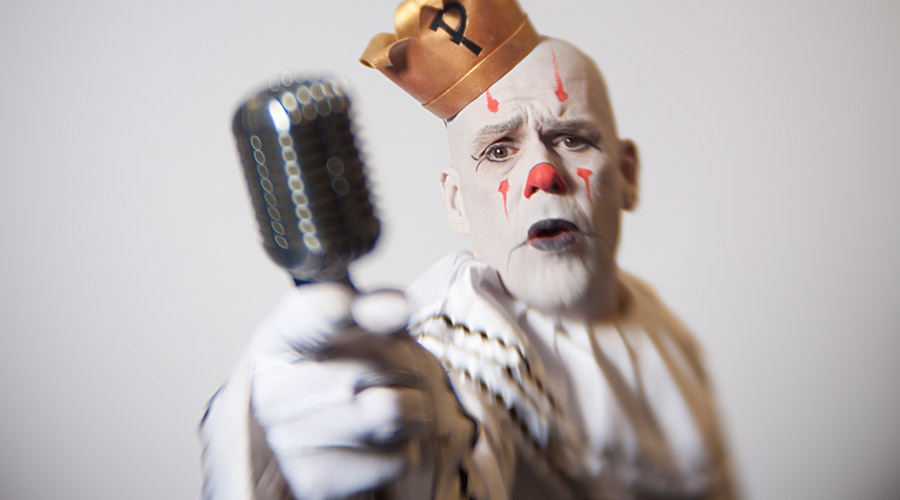 A 7-foot clown walks into a bar. He motions for a soda water and sits there staring at his drink. The year was 1998 and Puddles had wandered into the Star Community Bar in Atlanta, GA where bartender Big Mike Geier first laid eyes on the sad, silent clown.

“There was a heaviness about him,” says Geier. “I could tell he wasn’t in the mood to chat, so I pretty much left him alone except to pass him the mustard when he pulled an onion and a heel of bread out of his pocket. A couple weeks later, he came by the bar and gave me a flyer to a show he was doing at a flea market. The sound system was crap, but his voice was something else. I’ve been in my share of bands and wasn’t expecting much from a clown singing karaoke from a boombox. But I’ll be damned if his singing didn’t get me all choked up.”

The two soon became close friends, with Big Mike acting somewhat as a confidant as the pair travel all over with Puddles Pity Party, Mike speaking on behalf of Puddles since the clown chooses to stay silent.

Originally from River City before kicking around Atlanta, the sulking serenader gained momentum after hitting the road as guest performer on the 2010 Aqua Teen Hunger Force Live tour and 2013 Eels tour and making special appearances at Seattle’s Teatro ZinZanni and NYC’s Sleep No More.

It was Halloween 2013 when Puddles then teamed up with Scott Bradlee’s Postmodern Jukebox to record an epic version of Lordes’ hit song “Royals,” which instantly went viral on YouTube, having received over 16 million views so far. The “sad clown with the golden voice” captivated audiences and media from around the world, building a fan base of more than 167,000 on Facebook.

Puddles has since performed all over the planet garnering rave reviews at festivals like Edinburgh Fringe, Adelaide Fringe, Perth Fringe, Melbourne International Comedy Fest and Belgium’s Gent Fest. He was a feature performer in La Soiree’s 2014 Southbank show in London, which won the Olivier Award. In 2015, Jack Black selected Puddles to perform multiple sets at Festival Supreme, and Puddles was handpicked by Neil Patrick Harris to perform Just For Laugh’s “Circus Awesomeus” gala filmed for HBO Canada.

Today, the softhearted crooner continues to wander the world with melancholic pop anthems and free hugs for all the party people. Though his suitcase is packed with plenty of Kleenex, the show is not entirely about sadness and longing. Puddles’ set is peppered with a brilliant sense of the absurd, mixing lots of humor with the awkward, tender moments.

“Puddles gives an emotive performance that resonates with all kinds of folks,” says Geier. “The crowd really responds to him. There’s something about a giant sad singing clown that comforts us, lets us know it’s ok to feel. And the fellowship he creates brings joy. It’s a sad and beautiful world, and we’re all in it together, even when we’re totally alone.”

About Witching Hour
Presented by The Englert Theatre and Little Village Magazine, Witching Hour is a festival dedicated to exploring the unknown, discussing creative process, and presenting new work.

Each year, we welcome the brightest artists and thinkers pushing the boundaries of their respective crafts. Through performances, readings, discussions, workshops, and screenings, we engage what it means to be human in today’s world. Returning to downtown Iowa City on October 12 and 13.