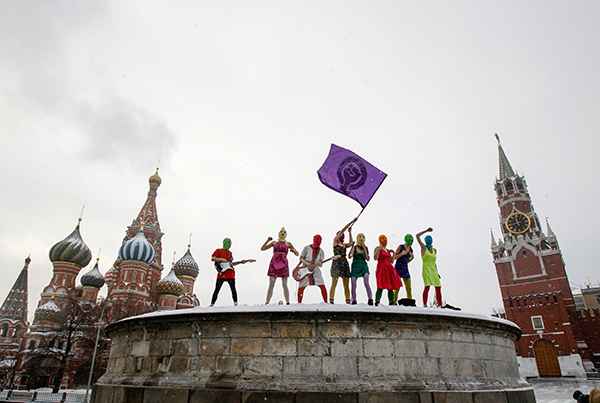 Pussy Riot is a Russian feminist punk rock protest group based in Moscow. Founded in August 2011, it has a variable membership of approximately 11 women ranging in age from about 20 to 33. They stage unauthorized provocative guerrilla performances in unusual public locations, which are edited into music videos and posted on the Internet, as well as reported widely by international media. Their lyrical themes include feminism, LGBT rights, opposition to the policies of Russian President Vladimir Putin, whom they regard as a dictator, and links between Putin and the leadership of the Russian Orthodox Church.

In 2012, five members of the group staged a performance in Moscow’s Cathedral of Christ the Savior, protesting the Orthodox Church leader’s support for Putin during his election campaign. In March, three of the group members were arrested and charged with hooliganism. On August 17, the three members were convicted of “hooliganism motivated by religious hatred,” and each was sentenced to two years imprisonment.

The trial and sentence attracted considerable criticism, particularly in the West. The case was adopted by human rights groups including Amnesty International, and by a number of prominent entertainers. Having served 21 months Alyokhina was released on December 23, 2013. She now travels the world speaking against the issues mentioned above in Russia.

On this tour, she is joined by Pussy Riot’s Mediazona collaborator & reporter, Alexandra (Sasha) Bogino. Since October, 2015 Bogino has been working as a reporter at Pussy Riot’s indepednent media outlet, Mediazona. In 2014-2015, Bogino reported on several demonstrations in Moscow — against the war conflict in Ukraine, censorship in Russian media, current government and elections. Wrote about trial of Nadya Savchenko, a Ukrainian female solider, who was convicted in killing two Russian journalists during an air strike in Eastern Ukraine.

In May, 2016 took part in the Raoul Wallenberg’s Committee roundtable in Budapest as a representative of Media Zona. Currently investigates the Wallenberg’s case and tries to enlighten the circumstances of his imprisonment and death in the Soviet Union.

In July, 2016 investigated the death of a 27 years old soldier from North Ossetia, who believed to be murdered by his colleagues in a military unit in Moscow suburb. Now writes mostly about Russian opposition activists, political prisoners and conditions they face in jail.