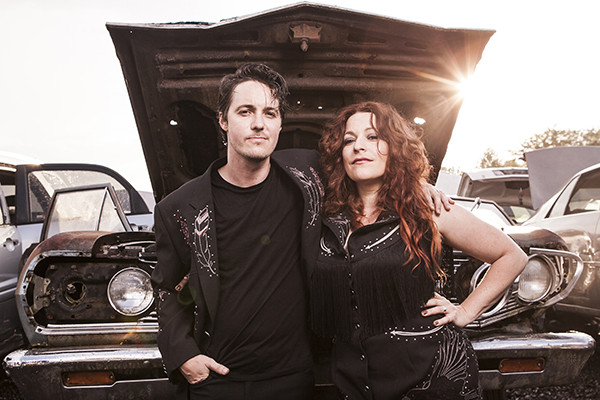 Ticketing: $28.50 + Fees General Admission on Main Level / Reserved Seating in Balcony
We want you to enjoy your show experience to the fullest. Please note that we expect patrons will want to stand and dance on the main floor. Per theatre policy we do not allow dancing in the balcony. The balcony will be the place to be if you wish to stay seated during your show experience.
Purchase tickets at the Box Office or Online

The 12-song collection, produced by Trent at the couple’s home studio in Charleston, succeeds 2014’s Swimmin’ Time and 2012’s O’ Be Joyful; the latter title garnered the twosome Americana Music Awards for Song of the Year (for “Birmingham”) and Emerging Artist of the Year. Last year’s Busted Jukebox, Volume 1 was a collaborative collection of covers featuring such top talents as the Milk Carton Kids, Lucius, JD McPherson and Butch Walker.

On the new release, Trent and Hearst as ever play all the instruments and penned the material, which range from stomping rockers to delicate acoustic-based numbers. Many of Little Seeds’ finely crafted and reflective new songs – completed in the late summer of 2015 — are drawn from tumultuous events experienced by the couple over the course of the last two years.

“There were two major changes that happened at the same time,” Hearst says. “We found out we were pregnant, and at the same time Michael’s parents had been living with us, because his father is in the early stages of Alzheimer’s. Those two things, having the baby and facing the reality that our parents were aging, made this weird, awesome circle of humanity that really just took us out. I guess we were in the crosshairs of human existence.” Trent continues, “We started putting this record together right after the baby was born. Every spare moment I had I was in the studio doing my best to work around the cries, and Cary would have to sneak up and do her parts when the baby was asleep. It’s a funny thing trying to make a rock n roll record with a sleeping baby in the house.”

Hearst adds, “As we were finishing the record and making the final decisions about what to include in it, our good friend Eric was killed here in town. We ended up dedicating the record to his memory. The beginning of ‘This Ride’ is actually Eric’s mother telling the true story of how he had been born in the back of a police car. With her blessing, we added that to frame ‘This Ride.’”

“Invisible Man” and “Mourning Song,” were directly inspired by the debilitating illness faced by Trent’s father. Hearst says of the former song, “The disease is preventing him from being able to mentally wrap his mind around it. I wanted to speak for him. I wanted to express what it would be like for a man like him, a capable, funny dude. I wanted to put that in an up-tempo pop song, because it’s always interesting for dark material to be presented that way.”

Of “Mourning Song,” Trent says, “I was envisioning what it was going to be like for my mother after he wasn’t around anymore. It’s weird, maybe, to write a song about the death of your father who hasn’t died yet. It seemed like something he would do – write a tune to comfort my mother after he’s gone.

The hushed, moving spoken word “BWYR”, a song of unity at a time when some try to divide, is torn from an event close to home: the mass shootings at Charleston’s Emanuel African Methodist Episcopal Church in June 2015.

“The night we heard about it, we were in Denver and approaching the end of ‘touring while pregnant’, which was pretty intense,” Trent says. “We flew to Chicago, our show was cancelled – it was rained out – and we were stuck in the hotel, and that’s where it was written. We were talking to our friends and texting, and we wanted to be home so bad, to be with our people. These mass shootings seemed to be happening every weekend, and the thought of bringing a child into the world was overwhelming and scary.”

“Buffalo Nickel” takes on the most personal of all subjects: Trent and Hearst’s relationship as a married couple who also collaborate creatively. Only as the song developed did they begin to understand its topic. “We were trying to figure out what the story was about,” Trent says, “and the more we wrote on it, we said, ‘Are we talking about us here? Are we airing some things here?’” Without a beat, Hearst adds with a laugh, “And we were.”

Little Seeds also contains songs that deploy Shovels and Rope’s widely admired talents as storytellers: the thrashing “I Know,” a wryly observed description of intra-band backbiting, and “Botched Execution,” a darkly funny tale of a convict on the run in the manner of Southern gothic writer Flannery O’Connor. Inspired by a concise history written by Hearst’s father, “Missionary Ridge” looks back at the decisive 1863 Civil War battle.

The album also tips a hat to the group’s Americana forebears. “The Last Hawk” pays homage to Garth Hudson, the master keyboardist of the Band, who Hearst calls “a quiet genius, this weird, wonderful creature who can do anything with music.” Trent recalls, “There was an article in Rolling Stone that was one of the first things you’d ever seen where it was just Garth, explaining things from his take. We read it on an airplane, and I looked over at Cary, and she was crying – it really moved her.”

Both Trent and Hearst acknowledge that making Little Seeds took the band into previously unexplored and even unimagined creative terrain. “It was cathartic,” says Trent. “There were some songs we had trouble getting through because it was too emotional for us. That’s not really how we had approached songwriting in the past — we got really into writing character-based songs on Swimmin’ Time. For Little Seeds, this is what was going on, and it was all consuming, physically and emotionally, and I feel like we couldn’t help but to be very raw and honest.”

Hearst says, “At a certain point in your relationship, professional or personal, you think it’s maybe run its course – ‘We can’t possibly write more together than we have in the past. We can’t possibly live closer than we have in the past. We can’t possibly understand each other more.’ But in the last couple of years, that has happened. We have become even more intimate as writing partners, and in life, collaboratively. It showed me that there were new depths to conquer in our creative life and our personal life and our family life. It’s all deeper and wider than I could ever have imagined it. Which is great.”