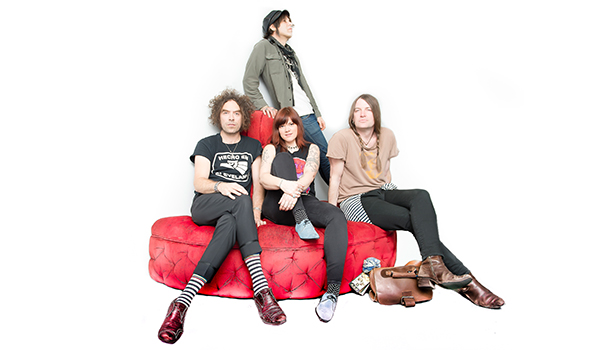 with supporting act The Shivas

Just seeing how this works and it;s GREAT. I love exclamation points, and this wonderful OLYMPIA typewriter does not have one, I know that Im gunna be using plenty of EXCLAMATION to describe a groovy little band outta Portland, called THE DANDY WARHOLS! (i found it)

Anyway, I was first aware of the DANDIES round 1993 or 4. It was a a heady time then, GRunge was breaking bad, I was booking an all ages club called the X-Ray cafe, and pretty much at the end of my rope when it came to booking “an alternative” band. You mean bass, drums, guitar…verse, chorus, verse, chorus? whoo hoo… It was just becoming kinda a sausage, unsexy, loud, macho boy, aggressive kind of scene/sound there, for a bit. Not to say that there weren8t some great loud unsexy bands that I enjoyed or booked but you get the picture…

So I heard about Courtney Taylor’s new band called THE DANDY WARHOLS. I heard that they had that youngster/cutie pie, Zia in it who was just about ready to start hustlin’ cigarettes for camel. For me at least, this mysterious guitar fellow, Pete (where did he come from, anyway?) I also knew Eric their original drummer from various nights on the town. I heard of these folks b4 I’d “heard” them… Nakedness, f***ing, drugs, bike rides, motorcycle rides, cult like, were they associated with that Partridge Family Manson thing that was around then? who knew? I just know they were talked about with the sort of “you had to be there, oh my god! One long jam, Zia took her shirt off! oh my god!” kind of way.

I got to know Courtney a bit better over the late 90’s and early oughts. Still so cool and being able to back THAT up, with whatever that means.

You either get it or you don’t. Courtney GETS IT! I really did and still do love just sitting and listening to him talk about his band, the scene, art, wine, famous people, not famous people, my mom, really anything. I always think that you gotta bring THE WHOLE SHAKER of salt when you belly up to Courtney, but it’s always been fascinating and enlightening.

They were making the scene round PORTLAND, but became INTERNATIONAL stars after someone across the pond had the foresight to use their music for commercials, films, jingles and whatever else happened. You just catch lightning in a bottle sometime (don’t I know it) and you just ride that wave or lighting or whatever. Try not to question it too much and hope you are equipped to handle it. Fortunately for the WORLD The DANDY WARHOLS were equipped to handle that with grace, style, a bit of humility (not too much of that though, Rockstars shouldn’t be too humble) but never losing touch with their friends back home.

We loved to hear the tales of the festivals and the people that they met. David Bowie, Keith Richards, Parker Posey, John Taylor, I don’t know all the famous people thy have met, befriended, or collaborated with, but it’s an impressive list. I mean, I got to go to the PLAYBOY MANSION with them to watch them play a pro pot party. To be able to to witness in person, how smooth and effortless they looked and sounded on the red carpet. They were fantastic! Zia, in particular, speaking to Danish television about how important it is to be a great mother and still being able to take cannabis in a fun responsible manner, without it coming off like a stoned mom. She was so elegant and perfect. I love Zia!

I just got done listening to THE DANDY WARHOLS first LIVE Album EVER! It’s titled [13 Tales From Urban Bohemia] LIVE at the Wonder Ballroom. The driver of the car was particularly impressed on how it sounds like a LIVE record, which is GREAT, but then we discussed how some live records sound crappy but are awesome and classic live albums. The Stones’ “Liver Than You’ll Ever Be”, The Kinks’ “Live 65” and to an extent The Kinks’ “One For The Road” is. TONS of crowd, barely any instruments or vocals coming strong but screaming more than singing. Hi pitched or just some assorted screams and sing-alongs.

I really liked how The Dandies didn’t restyle the record. It’s a slow creeper classic of early ought tunes. Don’t f*** with it, and they didn’t. I like the stony songs better on the Live record, and the rockers just sound great. I love how Courtney draws out “Horse Sized Piiiiiiils” Have fun getting reacquainted with a classic.

I am in Denver, Colorado as I type this and got down with some nice legalities while being driven around a rental car. It’s been on low, medium and high volume. It’s soothing, sing alongy, and just weird. It8s a fun record….end

Anyway back to my lil’ buddies The Dandy Warhols, the people…

FATHEAD! That guy! Talk about a fellow that he and I get along with one another. Something about the two of us together, and hilarity can and will breakout. How cool is it that Courtney recruits the best singing beautiful haired grooviest drummer ever. AND they are RELATED!!?! THAT was a great move. Like getting Jabbar from the Bucks to the Lakers! What can you say? The people love him. He is one talented mutha. Nice move Mr. Taylor that was a good move….

Anyway, I just got a text from the reigning Spelling Bee champ in Portland, Zia McCabe, wondering if I was chicken or Veggie for the dinner (i’m her date) I chose chicken and am pleased to have the champion on my arm! (or I’m on HER arm, these are crazy times) I guess knowing and listening to The Dandy Warhols is just THAT… always knowing ya got best, smartest, prettiest, funny, sexy, stoniest, friendly, and everybody wants to be around girl/boy on your arm, on the red carpet, getting your picture taken, and know that your entrance and exit will be perfect! Well done, Dandies! I’m so glad to know you, listen to your music, and knowing full well that wonderful circle you have made. (I love circles) No more bohemia, bohemia now…you dig? Oh yeah, I loved their appearance on Regis a few years ago… Smoke it! Youtube IT.
– TRES SHANNON, CAPRICORN – Voodoo Doughnuts / X-Ray Café

I would like to thank Damon and whoever lent me their OLYMPIC typewriter on such short notice. Thank you. 2 phone calls and a typewriter was delivered to me. How cool! DANDIES RULE OK.Bio by: Tres Shannon, Capricorn – Voodoo Doughnuts / X-Ray Cafe (Portland, OR)