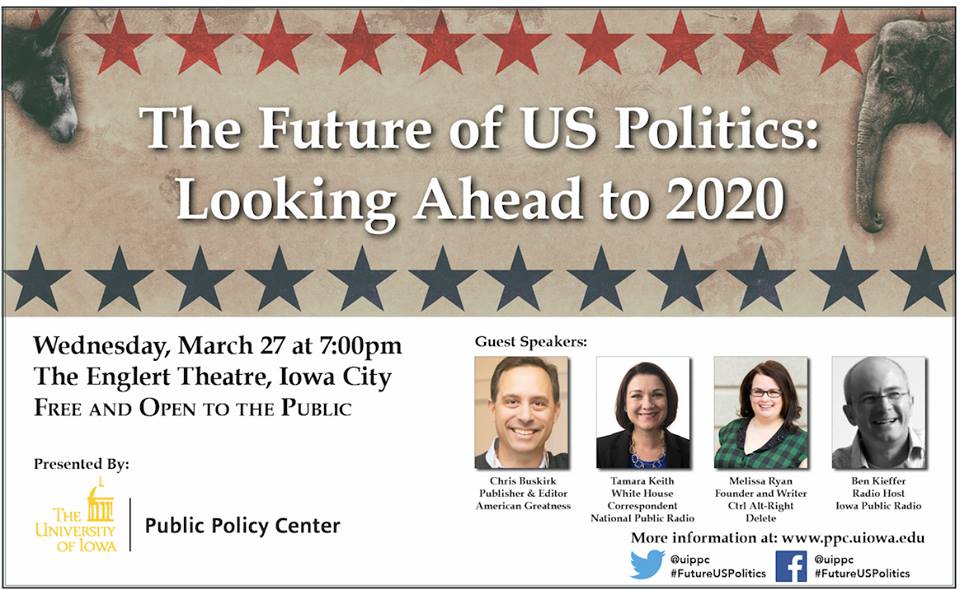 The Future of US Politics: Looking Ahead to 2020.

The event is FREE and open to the public!

Join us for a thoughtful discussion of politics in the United States and the future of the Democratic and Republican parties from left, right and analytical perspectives. Featuring Melissa Ryan of Ctrl Alt-Right Delete, Chris Buskirk of American Greatness, and Tamara Keith of NPR.

Chris Buskirk is the publisher and editor of American Greatness. He is a contributing opinion writer for The New York Times. He has written for The Washington Post, The Spectator, USA Today, The Hill, The New Criterion, and other publications. He is a frequent contributor to Fox News, NPR’s Morning Edition, the PBS Newshour, and Hardball with Chris Matthews and regularly appears on CNN. He is the author of the book, Trump vs The Leviathan and, along with Seth Leibsohn, American Greatness: How Conservatism, Inc. Missed the 2016 Election & What the Establishment Needs to Learn. He was a Publius Fellow at the Claremont Institute and received a fellowship from the Earhart Foundation. Chris is a serial entrepreneur who has built and sold businesses in financial services and digital marketing. He received his B.A. from Claremont-McKenna College.

Tamara Keith is a NPR White House Correspondent and co-host of the NPR Politics Podcast. During the 2016 presidential campaign she was assigned to cover Hillary Clinton.

Prior to moving into her current role in January 2014, Keith was a Congressional Correspondent who put an emphasis on covering House Republicans, the budget, taxes, and the fiscal fights that dominated at the time. She began covering Congress in August 2011.

Keith joined NPR in 2009 as a Business Reporter. In that role, she reported on topics spanning the business world from covering the debt downgrade and debt ceiling crisis to the latest in policy debates, legal issues, and technology trends. In early 2010, she was on the ground in Haiti covering the aftermath of the country’s disastrous earthquake and later she covered the oil spill in the Gulf. In 2011, Keith conceived of and solely reported The Road Back To Work, a year-long series featuring the audio diaries of six people in St. Louis who began the year unemployed and searching for work.

Keith has deep roots in public radio and got her start in news by writing and voicing essays for NPR’s Weekend Edition Sunday as a teenager. While in college, she launched her career at NPR Member station KQED’s California Report, covering topics including agriculture and the environment. In 2004, Keith began working at NPR Member station WOSU in Columbus, Ohio, where she reported on politics and the 2004 presidential campaign.

Keith then went back to California to open the state capital bureau for NPR Member station KPCC/Southern California Public Radio. In 2006, Keith returned to KQED, serving as the Sacramento-region reporter for two years.

In 2001, Keith began working on B-Side Radio, an hour-long public radio show and podcast that she co-founded, produced, hosted, edited, and distributed for nine years.

Keith earned a bachelor’s degree in Philosophy from the University of California, Berkeley, and a master’s degree at the UCB Graduate School of Journalism. Keith is part of the Politics Monday team on the PBS NewsHour, a weekly segment rounding up the latest political news. Keith is also a member of the Bad News Babes, a media softball team that once a year competes against female members of Congress in the Congressional Women’s Softball game.

Melissa Ryan’s work lives at the intersection of politics, media, and technology. For more than a decade she has been a staple in the progressive movement, helping progressives build and grow online communities. Ryan is currently visiting fellow at Media Matters for America, where she works alongside the researchers and writers studying the intersection of disinformation and technology, sharing her own expertise and identifying opportunities for content that benefits the public.

Following unprecedented foreign interference in the 2016 election, Ryan launched Ctrl Alt-Right Delete, making her one of the first progressives to chronicle the rise of the alt-right. Since then, she has partnered on the newsletter with Hope Not Hate, a UK organization fighting racism and fascism for a generation, which has brought their expert research and campaigning work to the USA. Her newsletter has grown to more than 14,000 weekly readers — and led Ryan to launch Factual Democracy Project, an organization pioneering a multi-disciplinary response to the extreme right coalition and the weaponization of the Internet.

As a consultant and digital campaigner Ryan has worked on more than 20 federal, state and local campaigns, leading teams that have built vibrant online communities that have knocked on thousands of doors, made tens of thousands of phone calls, and contributed millions of dollars to political candidates.

Ryan was instrumental in the Wisconsin union protests in 2010, helping organizers turn the occupation of Wisconsin’s State Capitol Building (to protest Scott Walker’s legislation that stripped public workers of their right to collective bargaining) into an international news story. She amplified voices of local Wisconsin bloggers and influencers at the protests and helped their work find an global audience, helping their stories be heard by millions.

As digital director at the New Organizing Institute, Ryan helped train over 500 digital strategists, helping build what The New York Times Magazine’s Robert Draper called “the yawning digital divide between the two parties.” She later signed on as digital director of EMILY’s List, which helps elect pro-choice women leaders into office. During her tenure there her team added 1 million new members to the PAC’s online reach, an increase of more than 50 percent. Ryan also worked on Barack Obama’s 2012 reelection campaign on the digital team where she managed outreach to progressive media and other influential people.

Ryan was honored in 2014 with a Campaigns & Elections Rising Star award and was twice named by the Washington Post as a top tweeter for Wisconsin politics. She’s spoken on digital strategy at Netroots Nation, Harvard Kennedy School of Government, and Wellstone’s School of Campaign Management, among others. She’s often called on by both journalists and conference organizers to help everyday Americans understand how our current events are shaped by social media and how political campaigns use digital strategy to engage voters.

Ryan launched her career by writing about local and state politics for Connecticut Local Politics, then Connecticut’s most popular political blog. Her commentary about the 2006 Senate race –where Ned Lamont successfully challenged Joe Lieberman for his party’s nomination — brought her into national political prominence. In 2008 Ryan moved to Wisconsin where she served as Senator Russ Feingold’s new media director. She led a team that raised more than $5 million over the cycle — including the “CheddarBomb,” a coordinated fundraising campaign that raised nearly $500,000 for Feingold in a 24-hour period.

Individuals with disabilities are encouraged to attend all University of Iowa-sponsored events. If you are a person with a disability who requires an accommodation in order to participate in this program, please contact Leslie Gannon at (319) 335-6817 or leslie-gannon@uiowa.edu.