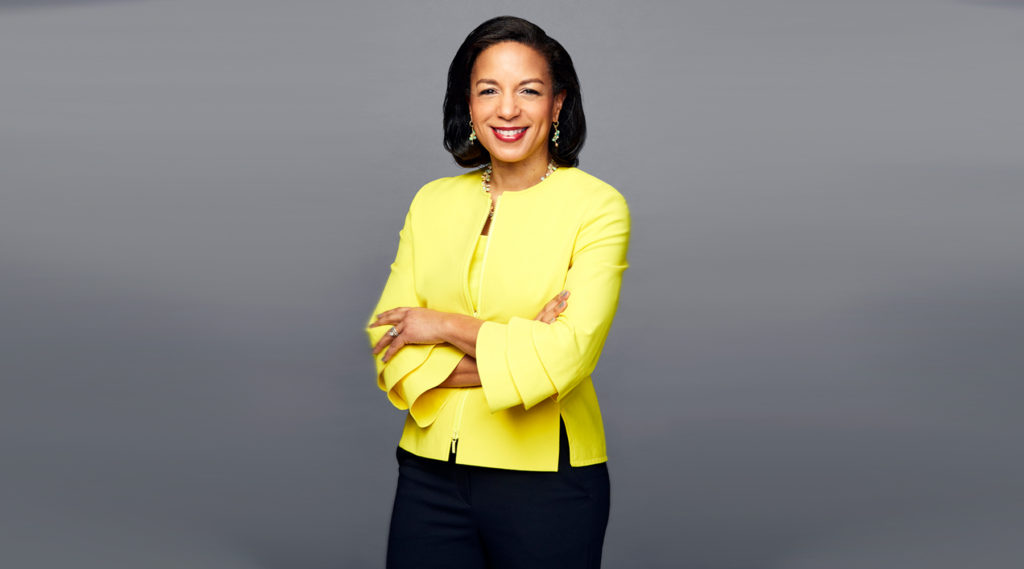 FREE and open to the public

Former U.S. National Security Advisor and U.S. Permanent Representative to the United Nations, author of the New York Times best-selling memoir, Tough Love: My Story of the Things Worth Fighting For.

Ambassador Susan E. Rice served as U.S. National Security Advisor and U.S. Permanent Representative to the United Nations under President Barack Obama. She is the author of the New York Times best-selling memoir, Tough Love: My Story of the Things Worth Fighting For.

Ambassador Rice’s twenty-five years of public service and unique experience at the highest levels of the U.S. government afford her deep and rare insight into the current geo-strategic environment, political risk, emerging markets, and leadership dynamics in the Asia-Pacific, especially China, as well as Europe, North
America, the Middle East, and Africa. She is also deeply versed in counter-terrorism, economic development, and cyber policy as well as U.S. government decision-making.

As U.S. Permanent Representative to the United Nations and a member of President Obama’s cabinet (2009-2013), Ambassador Rice worked to advance U.S. interests, defend universal values, strengthen the world’s security and prosperity, and promote respect for human rights. In a world of 21st century threats that pay no heed to borders, Ambassador Rice helped rebuild an effective basis for international cooperation that strengthened the United States’ ability to achieve its foreign policy objectives and made the American people safer. As U.S. Permanent Representative to the UN, she marshalled and oversaw all U.S. contributions to the UN, which account for 22% of its regular budget and 28% of its peacekeeping budget, and championed the UN management and reform agenda.

Ambassador Rice is currently a Distinguished Visiting Research Fellow at American University’s School of International Service and a Non-Resident Senior Fellow at the Belfer Center for Science and International Affairs at Harvard University’s Kennedy School of Government. She is also a contributing opinion writer for the New York Times.

From 2002-2008, Ambassador Rice was a Senior Fellow at the Brookings Institution, where she conducted research and published widely on U.S. foreign policy, transnational security threats, weak states, global poverty, and development.

Ambassador Rice served as U.S. Assistant Secretary of State for African Affairs from 1997-2001. In that role, she formulated and implemented U.S. policy towards 48 countries in sub-Saharan Africa and oversaw the bureau’s annual operating budget of $100 million and almost $800 million assistance budget. She was responsible for the management of 43 U.S. embassies and more than 5,000 American and national foreign service employees. Ambassador Rice was co-recipient of the White House’s 2000 Samuel Nelson Drew Memorial Award for distinguished contributions to the formation of peaceful, cooperative relationships between states. From 1993-1997, she served as Special Assistant to the President and Senior Director for African Affairs at the National Security Council, as well as Director for International Organizations and Peacekeeping on the National Security Council staff.

Ambassador Rice began her career as a management consultant with McKinsey and Company where she served natural resource, industrial, and some consumer companies.
Ambassador Rice has previously served on numerous boards, including as a director of the John F. Kennedy Center for the Performing Arts, Bureau of National Affairs (now Bloomberg BNA), Common Sense Media, the Beauvoir School in Washington, D.C., and U.S. Fund for UNICEF. She is currently on the board of Netflix (NASDAQ: NFLX) and is a member of the Aspen Strategy Group, the American Academy of Diplomacy, and the Council on Foreign Relations.

Ambassador Rice received her master’s degree (M.Phil.) and Ph.D. (D.Phil.) in international relations from New College of Oxford University, where she was a Rhodes Scholar. She was awarded the Chatham House-British International Studies Association Prize for the most distinguished doctoral dissertation in the
United Kingdom in the field of international relations in 1990. Ambassador Rice received her B.A. in history with honors and distinction from Stanford University in 1986, where she was junior Phi Beta Kappa and a Truman Scholar. In 2017, French president Francois Hollande presented Ambassador Rice with the Award
of Commander, the Legion of Honor of France, for her contributions to Franco-American relations.

A native of Washington D.C., Ambassador Rice is married to Ian Cameron, and they have two children. She is a sports enthusiast, avid tennis player, and retired basketball player.