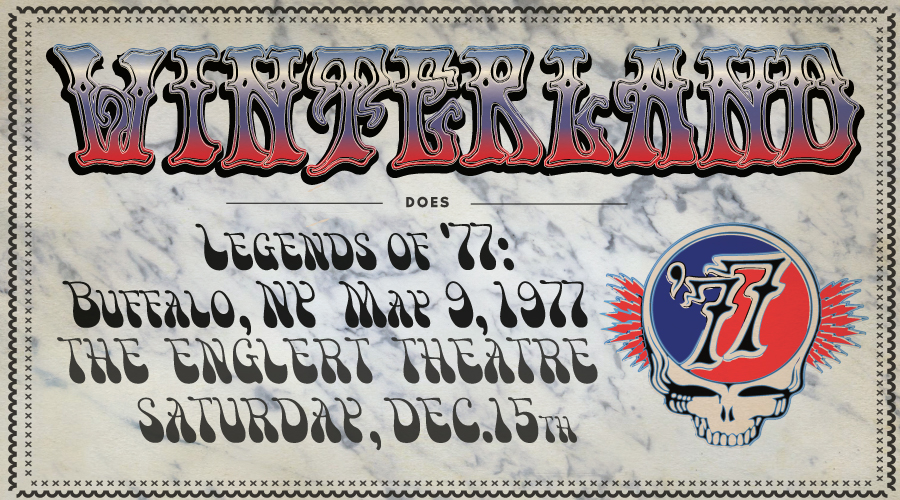 The Englert is proud to present Winterland, Iowa’s own Grateful Dead tribute, as they delve deep into the Grateful Dead’s vault of live shows to perform their 5/9/77 concert from Buffalo, N.Y. This legendary performance occurred the night after the 5/8/77 Cornell show in Ithaca, N.Y., the Dead’s most well-known live show from the late ’70s.

The Cornell show was one of the first widely circulated soundboard recordings from the Dead’s own Betty Cantor-Jackson, who did a live multi-track recording of nearly every show they played from the late ’60s to the mid-’80s. Cornell sounded like a studio album in its audio quality, and it was a magical performance by a band which was hitting on all cylinders during their 1977 tour. This tour was in every way exceptional – powerful yet sublime music poured from the stage night after night – but there was something particularly special about the Cornell and Buffalo shows. Whereas Cornell was laid back and relaxed, Buffalo was fiery and urgent, with the Dead opening the night with the 25-minute, jazzy, psychedelic rock suite, “Help on the Way>Slipknot>Franklin’s Tower” from their 1975 album “Blues for Allah.” Though less well-known than the show that was captured the previous night, Buffalo is an equally brilliant performance given by the Dead at the height of their inspiration.

Winterland can’t wait to recreate this exhilarating show with their own improvisational spirit and original voice while maintaining fidelity to the Dead’s well-loved, 1977-era sound.

Come warm up ahead of Winterland’s show at the Englert in honor of the Grateful Dead’s legendary late-spring run in 1977. Winterland will recreate the Dead’s set from May 9, 1977 in Buffalo, NY – the day after Cornell. The party will feature great food (prepared by the Banditos/High Hat team), excellent drinks, and good people. Plus, a truly grateful playlist to get everyone ready for the show!Admission is $20 and includes food buffet and one complimentary beverage. Available at the Englert Box Office or online.