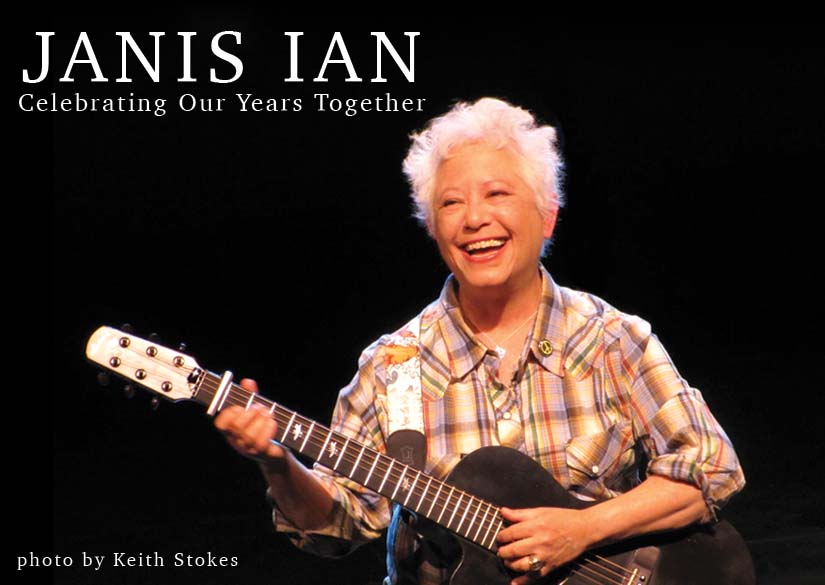 Celebrating Our Years Together

*Get access to advance ticketing and member discounts by becoming a Friend of the Englert. CLICK HERE to learn more.

Now in her fifth decade of writing songs and performing, Janis Ian received her most recent Grammy nomination in 2016, making a total of 10 nominations over the years in 8 categories! (She lost to President Jimmy Carter.) Her last Grammy Award, presented at the 55th Annual Grammy Awards ceremony, was for Best Spoken Word Album for her audio book “Society’s Child” (Audible.com). She had stiff competition — President Bill Clinton, First Lady Michelle Obama, Rachel Maddow and Ellen DeGeneres. When she won, she sincerely considered it to be a “stunning upset.” With her inimitable sense of humor, she went on to say “There must be a joke in here somewhere. An ex-president, a First Lady and three lesbians go into a bar…”

On a more serious note, she said, “We artists are the last alchemists, pulling your dreams, your hopes, your deepest desires out of thin air, and turning them into something you can hear, and play, and sing.. We don’t sell music. We sell dreams.”

Her songs have been recorded by singers as diverse as Cher, John Mellencamp, Celine Dion, Hugh Masakela, Nana Mouskouri, Charlie Daniels, Nina Simone, and Roberta Flack. She’s dueted, on her own songs, with artists like Dolly Parton, Willie Nelson, and Mel Torme (that recording was a Grammy nominee as well!) Her music has been widely used in films and television, including The Simpsons, Mean Girls, and the upcoming AbFab film. As an actress, she recently appeared alongside Rita Moreno and Laurie Metcalf in the final episode of the critically acclaimed series Getting On.

Always one to follow her heart and her beliefs, Janis was one of the first celebrities to come out publicly. She and her partner of 23 years were married in Canada in 2003, the only place where gay marriage was legal at the time (2016 marks their 27th year together). Her roller coaster ride has taken her to Nashville, her home since 1988, where she thrives with new product on her own Rude Girl Records label, ongoing touring, and perpetual and prolific songwriting.