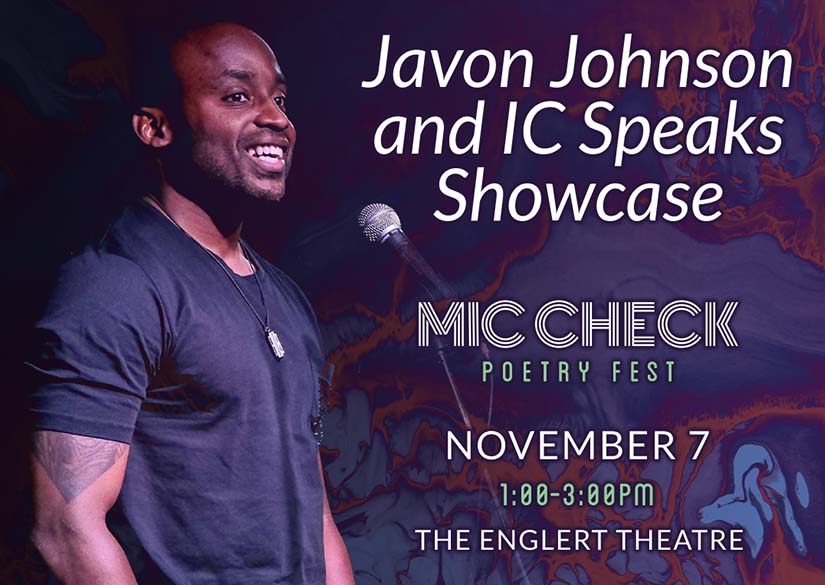 For the final event of Mic Check Poetry Fest, Englert Wavelength and Iowa City Poetry welcome to the stage renowned spoken word poet and creative scholar Dr. Javon Johnson, accompanied by talented teen poets from IC Speaks, the writing and performance project that empowers youth from all backgrounds to speak their truths.

A renowned spoken word poet, Javon Johnson is a three-time national poetry slam champion, a four-time national finalist, and has appeared on appeared on HBO’s Def Poetry Jam, BET’s Lyric Café, TVOnes Verses & Flow, The Steve Harvey Show, The Arsenio Hall Show, United Shades of America with Kamau Bell on CNN, and co-wrote a documentary titled Crossover, which aired on Showtime, in collaboration with the NBA and Nike.

Dr. Johnson’s first book, Killing Poetry: Blackness and the Making of Slam and Spoken Word Communities (Rutgers University Press 2017), unpacks some of the complicated issues that comprise performance poetry spaces and argues that the truly radical potential in slam and spoken word communities lies not just in proving literary worth, speaking back to power, or even in altering power structures, but instead in imagining and working towards altogether different social relationships. His second project, The End of Chiraq: A Literary Mixtape (Northwestern University Press 2018) is a co-edited book that critically creatively explores Chiraq (a name that is an amalgamation of Chicago and Iraq as a way to call to the violence of certain parts of Chicago) as a space and as a term. Additionally, Dr. Johnson has published in Text & Performance Quarterly, Liminalities, QED: A Journal of Queer Worldmaking, The Root, Huffington Post, and others.

Having published his first book of poems, Ain’t Never Not Been Black (Button 2020), Dr. Johnson is a creative scholar who has mounted exhibitions at the California African American Museum where he managed the History Department.

Since its inception in 2019, IC Speaks has dedicated itself to creating sustainable space, programming, and leadership that supports Iowa City’s young people with language arts education, writing and public speaking skills, and self-expression. It is vital that the next generation receives the resources and support to succeed in the future. History has taught us: communication is key. The ability to listen with an open heart & mind, think critically, and synthesize ideas & experiences into a well crafted presentation is a set of skills that puts you on the path to greatness. These are the lessons young writers will take into adulthood—whether it be in a writing career, a job interview, or any other form of interpersonal communications.