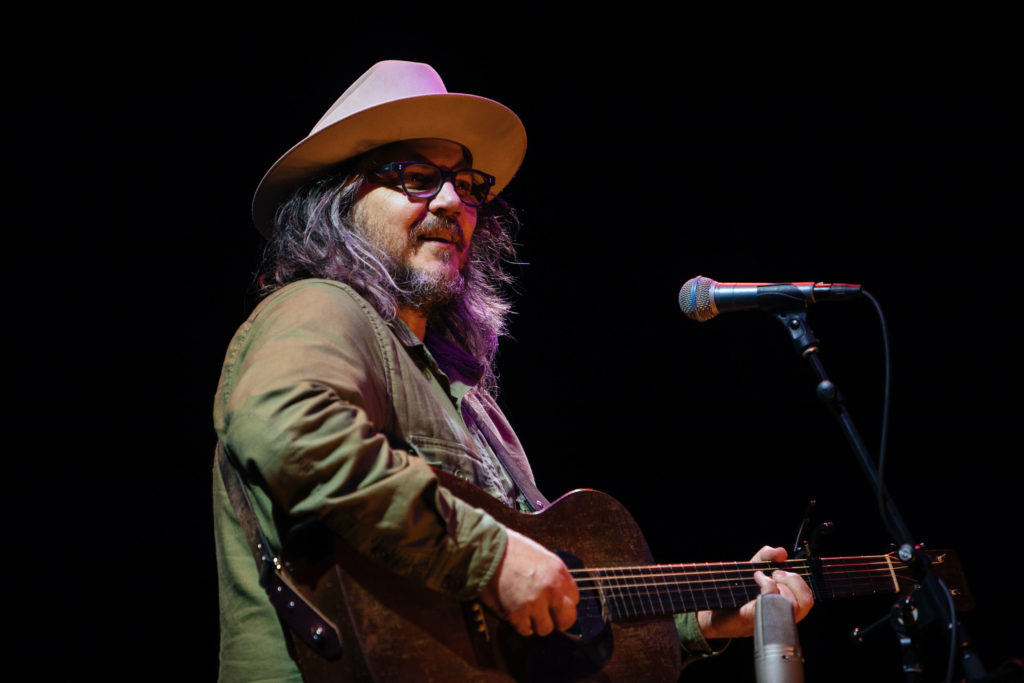 Jeff Tweedy has been one of the most influential American musicians of the past few decades. The singer-songwriter has kept himself busy over the last 24 years, recording 10 albums with Wilco (as well as several collaborations) and one with Tweedy, the band he started with his son Spencer. WARM, Tweedy’s first solo album, is largely a self-sustained labor of love for Tweedy—due out Nov. 30 through dBpm, the record label Tweedy and Wilco started in 2011, it was recorded at Tweedy’s legendary Chicago studio, The Loft, with his son Spencer Tweedy, Glenn Kotche, and Tom Schick.

A PERSON GETS TO A CERTAIN STAGE IN LIFE — I’m there myself — no longer in the throes of child-raising (that magnificent distraction), when he starts to think of death not as some abstraction that happens to other people but as a big, indifferent train that, even at this moment, is rolling out of a station located at an unknown, but not infinite, distance away. “Isn’t it time, now, to finally be happy?” the universe starts asking, along with a second, complicating question: “But how can I be happy in a world like this?” Put another way: we seem born to love, and yet everything here is conditional (i.e., comes to an end). How should we live when the huge piano labeled “Death” is eventually going to fall, not only on us, but on everyone we love?

This album is, it seems to me, an answer. Or, more than an answer, it’s a nod to the validity of the question.
Should I be wary of life or enjoy it? the listener asks.
Yes, Jeff Tweedy says.

After many years of asking myself what art is for, I’ve arrived at this: the role of the artist is to reach across space and time and console — to offer, not a cure or a prescription, but, rather, non-trivial consolation.

Jeff is our great, wry, American consolation-poet. I don’t mean this abstractly: to see him play is to find yourself in a crowd of people being actively consoled — being moved, reassured, validated, made to feel like part of a dynamic aural friendship. Jeff told me once that what he’s trying to communicate to his listener is: “You’re OK. You’re not alone. I’m singing to you, but I also hear you.” A testimony to the value Jeff places on this connection: after playing a number of solo acoustic shows in 2016 and 2017, he decided to make an album of those songs that seemed to speak most directly to those audiences.
WARM is that album.

Great art is really just great personhood in compressed form — a distillation of a human being that thrums with that being’s exact flavor. I’ve had this feeling meeting writers like David Foster Wallace, Grace Paley, Toni Morrison: a sense that years of hard work had refined what was personal in them into work that, though infused with particularity, has blossomed into universality. I have this feeling about Jeff and his music. The true mark of style in any art form is that, within a few seconds, you know who the artist is. Listen to five seconds of WARM and you’ll know it’s Jeff — by the sound of the guitars (the musical heart of the album is the circa-1930s Martin 0-18 that has been heard, at least a little, on every Wilco album, and is used on every track on this record) and by that magnificent voice: friendly (but formidable); tender (yet skeptical); edgy (but warm); but also by some other quality that seems, once things get going, to be present even in the pauses, some essential Jeffness that has come to be a vital component of my inner life over my many years of listening to him.

***
For a long time now, it seems to me, our culture has assumed that the function of art is to warn, to blame, to critique, to scoff, to dismiss. And those are some of its functions, for sure. But an art that only does those things is destructive. Destruction already being the dominant mode of our culture, we don’t need any more of it. Anyone who advocates “burning down the house” has likely never been inside a building on fire. By what do we really live? Our lives — our real lives — are made almost wholly of attempts at tenderness. We work hard on behalf of those we love, daydream about their future happiness, go out of our way to save them even the slightest pain, comfort them when the pain arrives just the same.

Jeff is, to my mind, a warrior for kindness, who has made tenderness an acceptable rock-n-roll virtue. By “tenderness” I don’t mean that New Age thing, where someone drives a spike through your head and you place hands palm-to-palm and do a cheesy deep bow while thanking them for the new coat rack. No: Tweedy-tenderness is sophisticated and badass and funny. It proceeds from strength and good humor and does not preclude being angry or tough or peeved. It is based on the premise that you are as real as he is and as deserving of attention, and that the world is worthy of our full and fearless interest, just as it is.

A poet is someone who lets language respond to language, trusting that meaning and sound are good friends who, given a little room, will work things out. Jeff writes by getting a musical track together and then humming / mumbling along until he finds a melody, which will start forming itself into words and phrases, while he waits patiently to see what he has been wanting to say. This is a remarkably sensitive method that lets meaning come out on its own terms, as subtly or overtly as it likes, and I am somehow put in mind of fireflies (lightning bugs, as we used to call them in Chicago), swelling into brightness and then being gone, as you ask yourself: did I just see that?

Certain lyrical flowers sprout up with regularity across the ten song-yards that are this record. A son who has lost a father sings to his wife, his sons, that father. There are apologies, and mirror-twins; threats to enemies (“I’d love to take you down / and leave you there”) and entreaties (“Let’s go rain again!”) and dreamy challenges (“I wonder how much freedom we can dream”) and ornery morphings of language that serve a simple function: they make the listener love language again.

“I leave behind / a trail of songs,” Jeff sings in “Bombs above,” “From the darkest gloom / to the brightest sun.”
What can a song do in this world? Well, you know. It can open a person right up. It can jolt you out of some bullshit state of mind, of sloth, of hubris. It can make that dead world out there suddenly come alive. It can make you (father, husband, son / mother, wife, daughter) newly aware that time is short and whatever love you have had better get spent, pronto. It can make you fond of things — and of the writer — for causing all of that newness to appear in your tired, old, habituated mind, which, under the influence of the song, is a kid again, on a summer day.

WARM is one of the most joyful, celebratory, infectious collections of songs I’ve heard in a long time. It’s intimate and yet vast and feels lovingly made, by actual people, in some particular place, and not inside a computer. As I was listening, I kept picturing a tight little cabin in the woods somewhere (the woods of Chicago?) under a big yellow moon, with four or five Jeffs in there all playing different instruments, and Spencer on drums, and Susie and Sammy are there too, and there’s a fire going, and a feeling of love and discovery and fondness in the smoky air.

Also in there, I think, is the spirit of Jeff’s father, Bob Tweedy, who passed away in 2017. His death was, as Jeff puts it, “the death that most people would sign up for.” That is: he had what is called a “good death.” There was some concern that the family might not make it to his side on time, but they did, and he passed surrounded by love, everyone rising to that profound occasion, and apparently there may have been some singing involved. This is not the death everyone gets, but Jeff’s father got it, that strange and much-to-be-desired blessing. How must it affect one’s view of the world to see someone you love, at the end of his life, get the merciful gift of a dignified release? And so, one of the things I find coursing through this record is gratitude, even joy, that such a thing can happen, along with a sense of wonder at the realization that death, for as much as we fear it, does not actually negate anything, or anything essential.

“Oh, I don’t believe in heaven,” Jeff sings, in the title track, “I keep some heat inside. Like a red brick in the summer: warm when the sun has died.” What’s the red brick? That would be us, you and me. And Jeff too. Where does that warmth come from? What is that mysterious thing that is sustaining us, moment to moment (even in this moment), by infusing us with love and curiosity and a desire to go on?