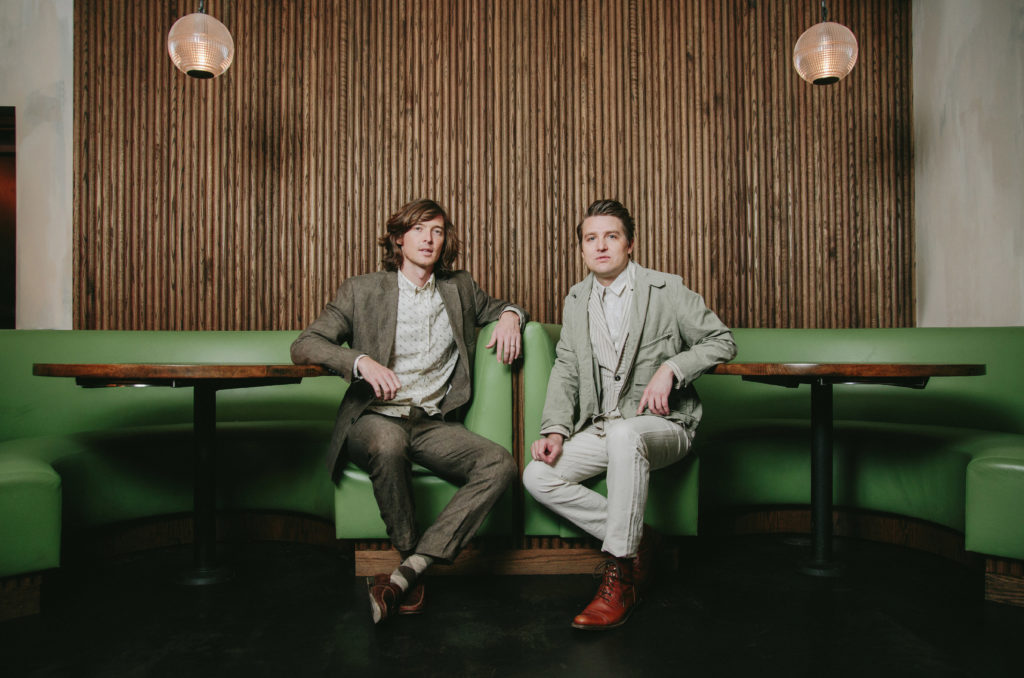 The new project marks the first time that acoustic duo Joey Ryan and Kenneth Pattengale have brought a band into studio with them. “We wanted to do something new,” Pattengale says. “We had been going around the country yet another time to do the duo show, going to the places we’d been before. There arose some sort of need for change.”

“Musically we knew we were going to make the record with a bigger sonic palette,” says Ryan. “It was liberating to know we didn’t have to be able to carry every song with just our two guitars.”

Though the duo set out to do something different, their ethereal, oscillating harmonies remain. The acoustic guitars that track with and away from their voices are still present on nearly every song. The new record even calls out Omaha and Ohio, in the tradition of earlier tracks like “Memphis” and “Michigan.”

But it’s not just the addition of the band here that creates something new. Since their last studio album, “Monterey” (ANTI- 2015), life has changed dramatically for The Milk Carton Kids. Pattengale is producing records in Nashville. Ryan is now the father of two children and works as a producer on “Live from Here with Chris Thile,” the reboot of “A Prairie Home Companion.” A break from years of non-stop touring, Ryan says, has given both of them “space outside of the band that gives us perspective on what the band is.”

But in recent years, national tragedies led Ryan to feel he had woken up in a land he didn’t recognize. Misfortune took on a more personal form for Pattengale, as he ended his relationship with his girlfriend of seven years and found himself unexpectedly needing surgery for cancer. (He is cancer-free now, and accidentally broke his cigarette habit in the process.)

Though they didn’t approach the new album conceptually, a theme of shattered realities began to emerge out of the songs that sparked to life. Recent events provided a bruising background for the record, yet the project is somehow bigger than any personal grief. Two-part harmonies ride acoustic guitars high above the haunting landscape created by the presence of the band, as if Americana went searching for a lost America.

Produced by Joe Henry and engineered by Ryan Freeland, “All the Things That I Did and All The Things That I Didn’t Do” was recorded in October 2017 in the Sun Room at House of Blues Studio in Nashville. Musicians who joined them there included Brittany Haas on violin and mandolin, Paul Kowert and Dennis Crouch on bass, Jay Bellerose on drums, Levon Henry on clarinet and saxophone, Nat Smith on cello, Pat Sansone on piano and Hammond organ, and Russ Pahl on pedal steel and other guitars. Mixed by Pattengale, the album was mastered by Kim Rosen.

The album ricochets between familiar styles and experimental songs. “Just Look at Us Now” rejects easy sentiment, suggesting that hindsight only reveals how badly things have turned out. “It’s a terrifying place to be,” says Ryan, “when everything seemed to be going fine.” The stunned “Mourning in America” holds up an atmospheric Polaroid from the Midwest—as Ryan explains it, “what it feels like to live in a country you thought you knew.”

In one of their biggest departures, “Nothing Is Real,” neither of The Milk Carton Kids plays guitar. Describing the recording session for it, Pattengale says, “That was one of the days we had maybe ten people in studio. The way that I connected to the song was by playing it on the piano. When we were in studio and having trouble figuring out the angle, I thought, ‘Why don’t we use the piano, and assign each person a part of what I’m playing?’ That song used my piano part almost as if we were writing an arrangement.”

Inside the theme of shattered realities that wires the album together, even elliptical songs somehow become direct. The lyrics for “Blindness,” when set to music, acquired an unnerving undertone. A subdued rhythm section and extended guitar solo turns “One More for the Road” from a wistful late-night last call into an astounding ten-and-a half-minute elegy.

Western influences on “Younger Years” gallop over a snaking clarinet and under vocals looking for something to salvage from sorrow (“Love inside our hearts / is the only kind of savior we’ve been sent”). “You Break My Heart” features Pattengale’s solo vocals. Harmony turns “I’ve Been Loving You” into visceral grief. “For much of my life I’ve avoided that kind of intimacy and immediacy in my own writing,” says Pattengale, “but you have to leave your blood on the page. It’s wonderful, but it can also be a terrifying thing.”

“Big Time” brings the energy of their live performances into studio. “The goal was actually to record this one with a string band,” Ryan says. “So everybody was in the room together. Lyrically, this one deals in the most hopeful way with some of the themes of the record.”

The atmosphere on much of the album is both lush and spare, like waking up at night to find yourself on an ice floe that has drifted far from shore. “A Sea of Roses” traces its narrator’s burial wishes, while “Unwinnable War” went through a metamorphosis as it developed. “If these are the sides we’re staking out, no one side or the other can win,” says Ryan. “We lose sight of the damage the battle does.”

The title track, “All the Things I Did” presents a ledger of the countless tiny moments in a relationship from the vantage point of its passage into memory. (“The story of how the end came to be. How you became you. How I became me.”)

Pattengale talks about Django Reinhardt and Duke Ellington, while Ryan remembers listening to Crosby Stills and Nash as a child. In separate conversations, each mentions their distinct songwriting sensibilities.

“Joey and I famously have an adversarial relationship, and that did not abate when it came to choosing songs for this record,” Pattengale says, suggesting that producer Henry was perhaps the only person they would both welcome to referee the process.

Along with song choices, they have publicly needled each other over everything from geography to wardrobe selections. They relegate that side of their collaboration to repartee, on-stage and off. But inside the songs themselves, they make room for one another.

“Sometimes in singing, we’ll switch parts for a beat or a bar or a note,” Ryan says. “And things start to obfuscate what is the melody and what is the supporting part.” A third presence rises out of their combined voices.

“There are only so many things you can do alone that allow you to transcend your sense of self for even a short period,” Pattengale says. “I’m the lucky recipient of a life in which for hundreds of times, day after day, I get to spend an hour that is like speaking a language only two people know and doing it in a space with others who want to hear it.”