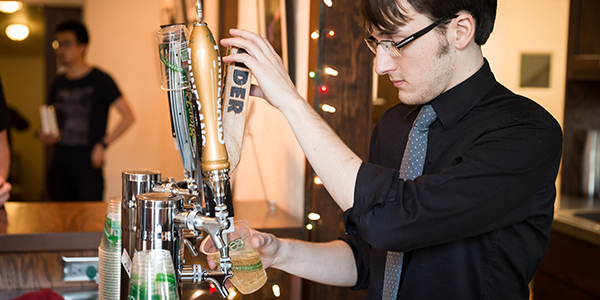 The Englert Theatre has partnered with three local breweries to brew three original beers inspired by our past, present, and future to be released from October 2015 through April 2016. The Englert Beer Series will feature original brews from Backpocket Brewing Company, Lion Bridge Brewing Company, and Big Grove Brewery. What better way to explore the history of our theater than through the rich history of craft beer?

“It’s all about connecting with your community in fun and interesting ways,” said Andre Perry, Englert executive director. “By collaborating with these local breweries, we can showcase the skills of these Iowan brewmasters while also taking a special look at the Englert’s history and place in the community.”

The Englert Beer Series will begin with Riot of ‘84 Pre-Prohibition Lager from Backpocket Brewing Company released in mid-October, reminiscent of the beer likely made by John Englert at Iowa City’s first brewery. Inspired by Englert’s (a leader in the local German Beer Mafia) hand in inciting the Beer Riots of 1884, this precocious beer has both aroma and flavor of husky grain notes and American hops.

“Backpocket is excited to pair up with The Englert Theatre to create a beer that ties back to the rich history of Iowa City pre-Prohibition brewing and the role the Englert family originally played in the riots that marked its end,” said Backpocket brewmaster and co-founder Jacob Simmons. “Now both the Englert and Iowa City brewing are both enjoying a renaissance, something that calls for a beer in celebration.”

In January, Lion Bridge Brewing Company will release Local Talent Robust Porter, inspired by our mission today of serving as a conduit between local and national scenes.

“Sometimes it’s a national act on stage, but the machinations of the Englert are run by local people who are passionate about the local arts scene whether they be employees, donors, or volunteers,” said Quinton McClain, Lion Bridge Brewing Company head brewer. “I think it’s good to shine a spotlight on the people behind the scenes.”

Quantum Finish will honor our institution’s four main eras: the Vaudeville stage, the local cinema, our reopening, and who we hope to become: a launchpad for community engagement, statewide collaboration, and original, commissioned works.

“Big Grove is excited to be working with the Englert, because we not only want to support Iowa institutions, but we also enjoy bringing the philosophy of beer to the people who enjoy the arts,” said head brewer Bill Heinrich. “Being a part of this broader culture is what Big Grove stands for.”

The Englert Beer Series will feature special release events to be announced. For more information on individual beers and release events, please follow our website or Facebook page.