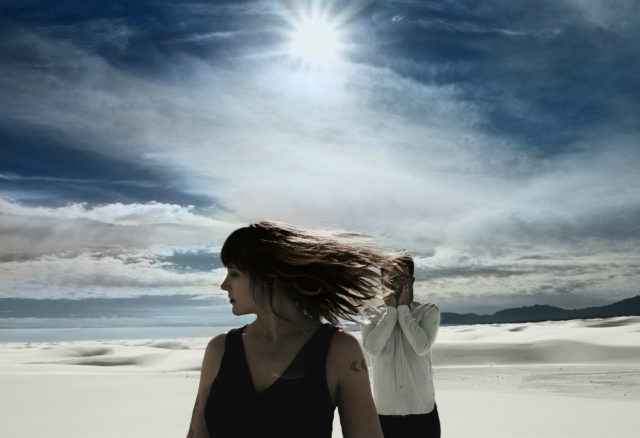 Wye Oak was last in Iowa City to provide an unforgettable close of Mission Creek 2011 as part of their Civilian tour, and return for Mission Creek 2018 with a new album that will be released that month. The band has spent the brief hiatus following the release of 2014’s Shriek and 2016’s Tween pursuing solo projects and collaborating with other groups. The group performs on Tuesday, 03 April 2018, as part of this year’s Mission Creek Festival. I had a chance to speak with lead singer Jenn Wasner on the phone, as she was experiencing a North Carolina oddity—a day with a foot of snow on the ground and an expected high of 65 degrees—which allowed our conversation to begin with the comment: “Isn’t it strange to deal with the human feelings for enjoying it even though it’s a terrible thing?”

You were last in Iowa City touring for Civilian—you’ve since put out Shriek and Tween, as well as albums for side projects. Can you describe your own personal evolution as a musician and artist during this time?

As a musician, and I’d include being an instrumentalist and producer who understands how music is created. The more work I do, the more I learn, the better I get—so there’s a weird learning curve where I have a better understanding of everything than I had before. But there was a time when I had an existential shut down when I lost the ability to believe in what I was creating. When I was young and just starting to play music I had the stupid confidence of youth and none of the skills. As I’m acquiring the skills, I’m becoming less secure.

In the last five years, I’ve come closer to the initial space of childlike joy in music and feeling like what I have to say has meaning, and that I’m comfortable to share with others again, but with a skill set that I didn’t have when I was 17. It’s actually exciting—I feel like my best work might be ahead of me. The records I’ve made over the past few years have been integral on both sides—feeling more like I know what I want to do and make, and getting the skills to make it happen.

So—you’ve gone through the puberty of your career and you’re now into the adult phase?

I’d love to think that, and I think my bandmate would agree. We feel like we’re doing our best work now, and we want to be careful and make that clear. Just because we’ve been a band for 10 years …we haven’t done the best we are capable of.

Do you think that the puberty phase of insecurity and gaining skills is necessary to avoid being the kind of band that has a genius album or two and then makes a career out of recycling those sounds?

It’s really really hard to make the creative spirit obey the rules of business. Bands that are big—real, honest inspiration doesn’t fall into that timeline. If you want to be a band that operates like a business, to put out records/tour on a schedule—you employ other people, not just [your]selves. Bigger bands cross that line—they make decisions beyond inspiration and having something to say. It’s fucking hard out there. Everyone has to work. But if that’s the space you’re in, you’ll make things…even if you’re capable of greatness—not all of [the songs] will be. They’ll obey the timeline as a stable source of income. That’s something I’ve always struggled with—it’s hard to make a living as a musician, especially if you don’t want to suck.

How does that contrast with artists who reliably put out incredibly solid music, time and time again?

No matter what you’ve done and no matter how great your reputation is, what your potential is: everyone is capable of doing something bad. No one—no one has earned a free pass. But it’s freeing. Some of my greatest heroes have made shitty music. It’s actually just normal—no one is infallible. Everyone has great potential for both great things and terrible things inside them. If you’ve been showered with praise and told that everything you do is great, it’s easy to slip into the mindset that you can do no wrong. You stop being a careful self-editor. I’ve made a lot of shitty music—but that’s how you learn. I reserve the right to make shitty music, because how else do you grow as an artist? All of the steps are integral to making something that’s a representation of who you are. It requires failure. You have to fuck up. We think about [great artists]—but if you ask them, they can go through the catalog and find the moments—but those steps were important.

You’re unusually forthcoming about your creative process—the need to switch to bass guitar, for example, as well as the need to literally move away from Baltimore. What are you playing with, currently, as a way to open up new forms or modes of expression? Or, given your comments above, in what new ways are you flirting with failure?

Just putting out a record is the most vulnerable example possible—it’s terrifying. For [the new record]…in the past, we’ve used limitations that we’ve put in place to subvert the blank page writer’s block zone. My bandmate and I feel like we’re better at everything than ever, so we felt it was less necessary to use those tricks—so we left it all on the table. It was intimidating, but fun—there were no rules. We’ve got a fucking cool new record that’s coming out soon, and I hope that people like it.

What are you relearning about Wye Oak as you prepare for your 2018 tour?

It is hard as a two-person band….both of us have outside projects and have collaborated with others. Because we’ve worked together for so long it’s easy to take the musical connection for granted, even though it can only be developed through history—we’ve been playing music together since I was 15. [After our break], we know how special that [shared history] is—that’s the thing that makes us most excited about [the new record]. We’re not the kind of people who would power through if we didn’t feel it was creatively vital. We wouldn’t feel okay about ourselves. The reason the new record exists is that we let us have time, privately and with others.

One of the things that held me rapt when I saw you perform here last was the way that your band has the patience to really allow for a song to build. When you’re writing—or especially as you perform—what instruments or moments best allow you to navigate how a song will rise and fall as it emerges?

Patience is a lovely word, and a great compliment. Thank you. It’s so hard to talk about—it’s intuition. It’s emotional. I listen to the way [the song] makes me feel, and it is a hard thing to put into words. Most songwriters I know have a strongly calibrated sense of intuition. When something makes me feel a certain way—if it works on me, it will work on someone else.

I had a bad habit for a while of trying to please others and give people what they wanted. It was the time in my life when I was least able to be productive—I had to relearn that if you make what you most want, for yourself, then you will connect with others. It’s an intuitive sense—if the song makes me feel a certain way, then I have confidence that others will feel it the same way. The worry isn’t whether others will understand it—but is it available to be understood. Your only job is to make it be [available].

Can you say more about the role that patience plays in your aesthetic approach? It really does seem central to your sound, as a band.

You’ll probably like the new record then. It feels right—and I think…it’s obvious when something feels forced. In the past, when we tried to fit whether people will experience something with us, then you shut down. That’s the quickest way to make the creative impulse disappear. I’m an extremely impatient person in my life, and very anxious about what people think about me and how they interpret who I am. The work for me is to override those tendencies and do something because it feels right to me, as an act of faith—that someone will understand it.
The way that you talk about creativity seems almost religious, and you’ve written beautiful songs about the Holy. What is that relationship, for you?

I’m not a religious person, even though I grew up that way. It’s something that we’re all socialized to make spirituality fit under religion. As someone who doesn’t believe in God, or a God, I have the agnostic’s dilemma of being open minded and don’t feel like I have the capacity with my human brain to know the universe, so I leave myself open to magic.

Writing songs—the feeling that happens when you feel like the whole world opens up and an idea is communicated into your brain that’s always existed—it’s the craziest, weirdest thing. It’s rare. It happens maybe three times a year—weird, actual magic, when you conjure a song out of thin air. The things that are “holy” are experiences like that—they don’t have to be bigger than the human experience is.

With that view of magic, and returning briefly to the question of patience—how do you get out of your own way to let that magic happen?

The best thing I can compare it to is a meditative practice—instead of meditating, I’m working. There’s no short cut. Even for me, even now, familiar with the process—it’s never easy, it never comes effortlessly, it takes an insane amount of time, and faith, that it will happen again even through weeks and months that seem to say it will never happen again. You show up out of sheer desperation and will. Nobody just sits down and has one of those moments unless they’ve been doing it for days, weeks, and months before that. I believe in the consistency of the creative process. There’s no easy answer. You just have to put in the time. Show up, over and over again. Feel how shitty it feels to not get anywhere, over and over again, and eventually, if you’re lucky, one of the times will be productive. The amount of time and self-doubt that goes into every 4-minute song I’ve ever made is insane. I wouldn’t necessarily recommend it to anyone unless there’s no other way. At the same time: it feels awesome when you get there.