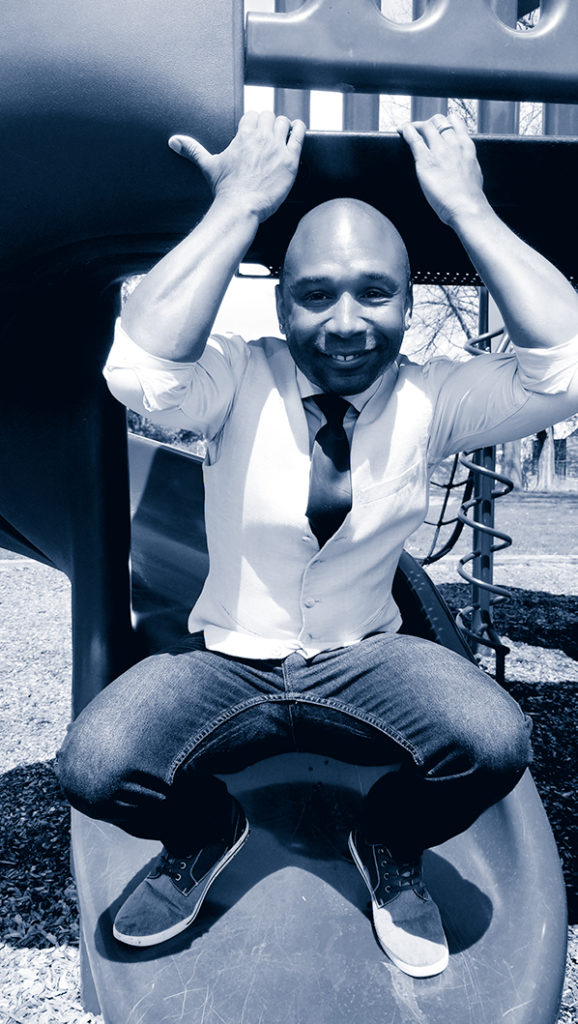 Editor’s note: As a result of the pandemic, along with the cancellation of spring events, Englert Nonfiction Fellow Darius Stewart’s opportunities to interact with art in our community, and to present his own reading were put on hold. Until we return to that time, we are excited to share some of his works.

To read about the fellowship and learn more about Darius, see the announcement from earlier this year. We are pleased to say the fellowship is extended through next year, and Stewart will be joining us this fall, now as a recent graduate of the UI Nonfiction Writing Program and next year’s NWP Provost Fellow.

You are a fourteen-year-old blackboy, a high school freshman, and don’t know what a stalker looks like until an old fat whiteman with rosacea and gray-white hair spots you from his tan sedan.
You’ve been warned of these whitemen, also known as the neighborhood spooks, and to beware.
He might have a friendly name like George and the temperament of someone grieving his youth, which has meant everything to him, and he wants to get it back however he can.
He wants consolation prizes, is open to the idea of young blackboys, although he usually prefers a particular one.
The young blackboy might be the one who comes into his corner store and deli to buy soap or floor wax for his mama.
He likes to think he’s reaped a bounty when he watches this young blackboy with other young blackboys. Does he imagine he might one day play daddy to the whole brood, or in his heart is it only this young blackboy whom he desires because it is only this young blackboy whom he hopes will succumb, eventually, to his longing?
In the early evening when he closes his store, he might imagine letting this young blackboy fuck him in the ass behind the deli counter, where the two of them will be out of view on a pallet of newspapers and plastic bags.
He might imagine this young blackboy at night clicking off the lights to sleep the way a child does in his mama’s home, she in her bedroom at the front of the house, his brother in the bunk above him, his sister in her bedroom across the hall, the family secured behind locked doors, latched windows (but only some of them safe).
And waiting for tomorrow, in the hours between closing time and those imagined fuck sessions, he might sit alone in his most comfortable chair, in a bathrobe, looming in the light of a floor lamp, lifting a cup of cold brown tea from its saucer, slurping it down while the other hand pulls aside the curtains to lurk into the dark night, impatient for morning.
Without this young blackboy, an entire constellation in the whiteman’s orbit, he might fall into despair as if the infinite stars in the sky will have vanished forever, that he might no longer have an opportunity to reduce the young blackboy to basic parts: two eyes, a mouth and jaw, nose, torso, legs and thighs, a blackboy’s feet.
And these were not just parts, but parts to which the whiteman is determined you can do anything…

For weeks you never knew that you’d become this desirable young blackboy.
You vaguely notice his car, or that wherever you go, so does he.
He always drives along the roads that form the route from your granddaddy’s house to yours. You aren’t supposed to go to your granddaddy’s house after school but straight home. You want to watch The Rockford Files and The Andy Griffith Show with him until the shows go off, and then you’ll leave for the twenty-minute walk to East 5th Avenue.
Up and over hilly South Olive Street, so close enough to home, you sometimes get tired, so you sit on the steps of the Korean church with its dark red, almost magenta, brick portico, stained-glass windows and high steeple.
One day you linger too long resting on the church steps because you don’t see him parked at the curb.
Like a ride, he says.
No, thank you, you say.
And he drives away.
You start for home again, and when you reach the bottom of the hill to stand at the corner of South Olive and Magnolia Avenue, waiting for the light to change so you can cross, there he is again, heading east on Magnolia Avenue, toward you.
How does he get there so quickly?
Your family has only recently moved into a house on East 5th, so you aren’t aware of any shortcuts, especially any he might’ve taken.
He stops at the light, forcing you to cross in front of his car to the other side of the street.
Like a ride, he says.
You say nothing.
A fire station across the street from the Korean church becomes a potential safe haven should the need arise.
Whatever diversions you take to get home, you’ll be sure to route your way there.
But it soon doesn’t matter. There he is.
So you find a new haven, the convenience store where you used to steal bubble gum when you were in middle school. You flee inside and wait it out on those days when he appears, remaining until you’re certain enough time has passed, when he’s gone, but he won’t be.
Eventually, you sprint home in short bursts, hiding behind strangers’ houses to rest, to catch your breath before you continue.
He finds you anyway.
His persistence is what frightens you most of all, as if he really can do anything.
You can’t outsmart him, can’t outpace him, but you need to try.
So you run, and you run faster, and when he’s there—like a ride home?—you run even faster.
You cut corners through yards. Slip through openings in the maze his car can’t get through.
You run without looking back. Like you’ve stolen something.
You dart across the lanes of Magnolia Avenue traffic.
You pray you catch the light.
You head toward RT Clapp, the auto repair shop, always frantic with people.
And once there, you are so close to home. You tear across the parking lot that butts against the edge of your back yard, where you once siphoned gasoline from a red gas can used to fill the lawn mower and poured a trail of gas that you lit and watched blaze until it gave up too much smoke. You run, petrified, like that.
You run as you always have from him, a fat old whiteman in a tan sedan who, sixteen years later, when you are thirty—like a ride?— creeps up on you again as you wait on Magnolia Avenue to catch a bus. Only now he drives a silver Mercedes. He is the same fat old whiteman who intends to make you his boy, and all of your thirty years turns away running, forgetting about the bus, and where it is you’re supposed to be, racing home to your mama’s house on Woodbine Avenue, praying to leave no trace for him to sniff you out ever again, praying to be swifter, that the engines and pistons of your arms and legs won’t ever shut down, praying for breath to fill your lungs, your chest ever expanding so you can run, run, run like a young blackboy just trying to get ghost, praying that fat old whitemen will just forever go away.