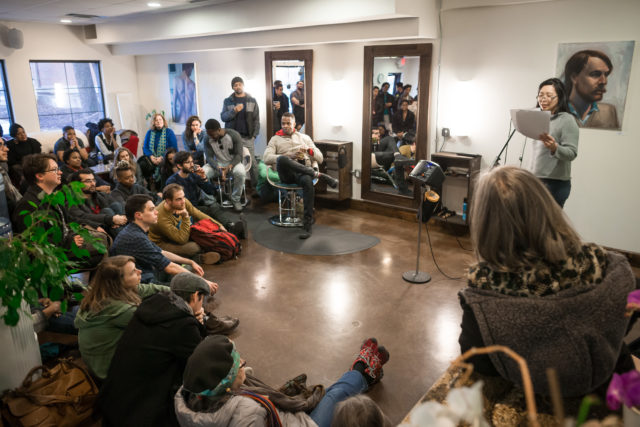 Artistic performances, at their best, exceed our ability to process them. They provide a reprieve from a world increasingly monitored and measured by metrics, which make knowledge manageable. One could analyze the angle of a dancer’s leap or the musical style of a guitarist, but knowing these facts never equals the thrill of being present at the event. We long for these moments, which serve as a reminder of the human ability to do what is awe-inspiring. We search out those experiences that leave us speechless. We find glimpses of that rare genius that resists and refuses what we encounter in our everyday. Brilliant performances illuminate possibilities on pathways that we too infrequently travel, and we tend to treasure these moments, fleeting as they are, as part of what makes life meaningful.

The disadvantage of art rendering us speechless is that it can reduce our memory of the experience. Describing a show as “awesome” may be accurate, but it is rarely helpful—especially given the amount of things presented as “awesome” in our contemporary society (meals, shots, games, etc.). The moment we reduce our experiences to one or two words—”awesome” or “fantastic” or “great”—is when we lose sight of the element that had inspired us to speechlessness in the first place. No adjective however apt, will truly fit the experience.

One way that many people try to preserve the experience is through technology, especially now that most people have smartphones that make recording and sharing a moment a matter of course. But rarely do these items, viewed out of context, communicate what we found so amazing. Because artistic performances are shared, watching them again on the screen of a phone or computer—without people listening raptly or singing along—often becomes disappointing. Not only that, but those who watch a performance through the interface of a phone often end up missing the full experience of the event itself.

The following provides a series of suggestions and questions to help transform your way of interacting with artistic performances from passive reception to active engagement. While there’s no wrong way to enjoy or appreciate art, learning how to engage more deeply with it enhances your appreciation of the full scope of an artistic performance.

1. Practice focused moments of attention. Often, especially at musical performances, the combination of loud volumes and bright lights mix with artistry in a way that makes it difficult to isolate particular moments of genius. Those who alternate between awareness of the whole and paying attention to particular elements are able to engage more deeply with the event—and thus retain more of it.

For example: focus on the lighting: what parts of the stage are illuminated and what parts are left in the shadow. What becomes foregrounded in the performance because of the lighting? Does your attention tend to move in columns or rows? What kinds of lighting allow the best sense of intimacy? What colors seem to work best?/ As another example, stay focused on how performers move their bodies on the stage—how do they interact with each other when they’re not playing a solo? How do they draw attention to themselves, or away from themselves? When is it that they seem most focused on their performance? When are they most focused on the rest of the band?

2. Pay attention to the performers. Event those who have never played an instrument, sung a song, or leapt into the air with controlled grace can generally find something to appreciate in what are often small movements that contribute to an astonishing whole.

For example: even thought they generally sit toward the rear, drummers are often worth watching. The precision and rapidity with which they strike a drum or cymbal is impressive, especially during incredibly fast song. Watching that same drummer slowly and gently caress a drumhead with a brush shows the drummer’s ranger—not to mention physical dexterity.

3. Think like a critic. Few performances lack blemishes: however talented, artists remain human. Invite yourself to share a performer’s human moments, rather than merely the artistic ones. Remember: part of what makes art so monumental to witness is that it emerges from fallible, imperfect humans. The more you see the limitations of performers—and the greatness that is possible, nonetheless—the deeper you can appreciate the work that goes into art. Often, the best way to appreciate what is good about a bad performance and what is great about a good performance is an awareness of what performers struggle with.

When you don’t like something, why it is that the art affects you in this way? When did you lose interest? What caused it? Why don’t you like something? What would you prefer? What elements of a performance emerged out of what you had disliked? How did the performers accomplish the transformation?

4. Focus on the unexpected. While many people appreciate art’s replicability—seeing or hearing what is anticipated or familiar—what often matters most are the small differences. These small moments, when an imperfection suddenly transforms into unexpected greatness, helps reveal the quality of a performer’s character. When an actor has the audacity to move according to the moment rather than the script, when a banjo player extends a solo through true inspiration rather than filling time. Watch how others on the stage react, when they look at someone else on stage with sudden, unplanned appreciation, and know that you’ve been given an unexpected gift.

What moments seem spontaneous? When does an artist seem to do something in private, despite being on stage? When does a performance seem to open into a moment that goes beyond a rehearsal?

5. Ask more questions. Becoming aware of the details of a performance transforms artistic performances into questions, rather than distractions. Questioning offers the space to think and feel alongside the performance as it continues. Each moment becomes a pathway into the art and allows you to speak about your experiences with more distinction. Realize that each thing you observe in a performance is a choise—each comment, each note, each pause, each movement. Each thing you observe can be translated into a question:

How did the performers decide to dress? What kind of mood typifies the interactions among performers? Does a performer seem nervous or confident? Does the performance invite the audience in, or alienate it in some way? What factors seem inviting? Where do the performers or stage crew direct the audience’s attention? What would motivate this? Do things seem to be moving quickly, or slowly? When do the performers seem most relaxed? How is the crowd responding to the show?

6. Be aware of your own response to the performance: Although you may not be a performer, ultimately, the performance is yours as you witness it. Nobody else sees the performance from your position, hears from your point of view. The way that the performance affects you has as much to do with you and your history as it does with the performers. Becoming more self-aware about who you are as a part of the audience, that day will allow you to be more clear about

How do I feel at the beginning of the performance? When can I tell that I’m becoming excited or interest? How does the performance affect my physiology? Do I strain to hear details, or does the volume overwhelm me?

7. Practice putting moments into words. Reading reviews of performances is a good way to develop a stock vocabulary and illuminates ways of phrasing how to appreciate performances. But relying too often on the words of others can quickly become a crutch. To truly possess—and thus recreate—the qualities that make an artistic performance worth viewing, the best practice is simply to narrate things. Whether you pretend to be doing the voice over narration during a documentary of the thing you see or are trying to describe it to a blind friend next to you, develop the habit of bringing what you witness to life in language.