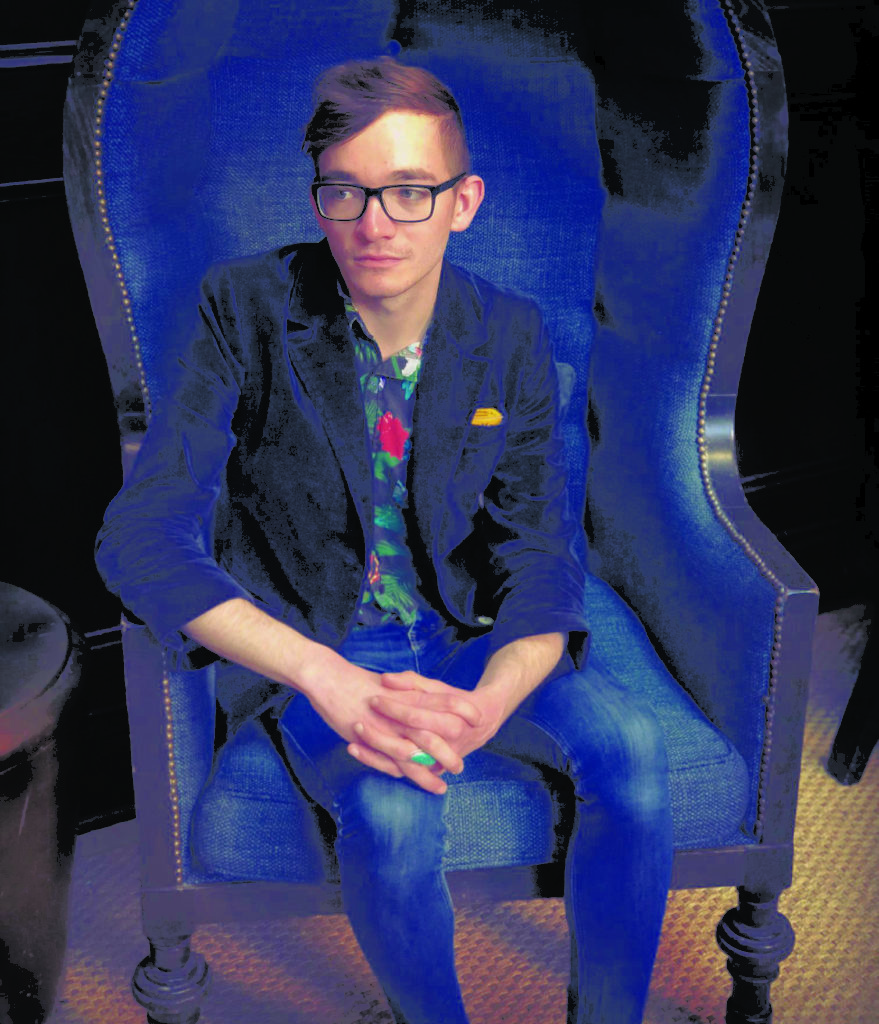 A non-Midwestern artist visiting the Midwest will comment, with horror, at our weather. The Blind Boys of Alabama, after their opening set, commented that they were happy to be in Iowa, but, man, was it cold. For Celeste Barber—Instagram comedian spoiled by Australia—an Iowa winter was crueler than the most venomous scorpions of The Outback. And for Piff the Magic Dragon, a magician and comedian and self-proclaimed second-most-famous dragon in the world—famous for performing exclusively in a dragon costume—icy winters were contrary to his biology.

For Midwestern ex-pat artists to return to the Midwest is to prove their Midwestern mettle through anecdotes of survival—survival of our winters and our geography. Demitri Martin survived a brief childhood stint in small-town Iowa before relocating to New Jersey. And New Yorker humorist Patty Marx, when researching a piece on Couchsurfing.com, couch-surfed in Iowa City with a total stranger and graduate student.

As an audience member and native Midwesterner, I flashed a perverse grin through each of these anecdotes as hecklers shouted—not boos or obscenities—but advice on coat brands, the art of layering, and the ingenuity of rubber overshoes.

We have a shared sense of camaraderie about the weather, and—in this modest region—humble brags about weather-readiness are a notable exception to our gag-order on braggadocio. So, pardon my boastfulness when I say the Midwest, above the coasts, has the most defined relationship with the climate, the land, the entire natural world. And it’s a clear cut one: man vs. nature.

I’m not the first to say this, and we’ll get to that, but first we need to address the pesky problem of defining what I mean by The Midwest. The Midwest—the middle of the west? Midway through the west? Midway to the west? Here is the land of those first few moments of the American Imagination, the first fractions of a second of an American Dream. The full dream has not been realized here and never can be. “Go west young man” is what they say, not, “Go west for a bit and then stop midway.”

The U.S. census bureau has the gall to define the Midwest as two separate regions: East North Central (Ohio, Michigan, Indiana, Wisconsin, and Illinois) and West North Central (Minnesota, Iowa, Missouri, Kansas, Nebraska, and the Dakotas). But dividing Iowa and Illinois is ridiculous to me: I saw from George’s how Iowa City reacted to The Cubs winning the World Series. And in conservation with Iowa’s own Professor Chuck Connerly, we spoke at length over how Iowans listen to Chicago sports broadcasts over those of St. Louis or Minneapolis or Kansas City, and how Iowa corn for years has fed Iowa and Illinois pigs before they were loaded on trains to Chicago. I’ve also met Pennsylvanians who insist they’re Midwesterners, Missourians who insist they’re Southerners, and Ohioans quite proud to share a time-zone with Manhattan.

Whatever here is, we’re all here. Some of us are descended from the original settlers, the indigenous tribes who learned this land before they were displaced and murdered, before their histories were erased from the dominant historical record. Others are descended from the mediocre or more practical than curious Conestoga wagon captains—those who shuddered at the Oregon Trail through the Rocky Mountains and settled for the straightforward prairie. And still others escaped violence or stuntedness in America and abroad to come here—to this newly available land of possibility.

I’m not going to settle the question of what the Midwest is—mostly because I minimize my interactions with people from Ohio—but altogether I think of Midwesterness as something less about specific geography and more about a particular relationship with the land.

Which brings us to Frederick Jackson Turner.
Turner was nervous when he addressed a room of hundreds of history professors at the 1893 Chicago World’s Fair; The World Columbian Exposition; The Quadricentennial of Columbus’s arrival in the Americas. He did not have a lot going for him—who goes to an indoor lecture on a July Afternoon when there’s a Wild West Show a few minutes away (a show that all of the visiting history professors had received free passes to courtesy of the show’s host, Buffalo Bill)? On top of that, Turner had written his remarks that same day, he was a freshman professor, and he was a freshman professor from the University of Wisconsin, which—in an era before cheeseheads and badgers—was a virtually unknown school in a relatively unknown state.

Frank Turner’s presentation, The Frontier Thesis, had an ego representative of 1893 Chicago: the prize of the 19th century Midwest. It was full of bluster: America had realized its Manifest Destiny. The country was settled from sea to shining sea. We were about to begin a new epoch of American civilization—one where there was no more frontier, nothing left to explore, conquer, happen upon. Frank Turner had no answers, but he urged his snoozing colleagues—filled with dreams of that free cowboy rodeo show–to ask the question, “Now what?”

But we might also answer Turner’s questions by looking backwards, witnessing and reckoning with what came of “the frontier” in order to allow for true forward progress.

The Midwest is the journey in-between, a crossroads in a constant state of both arrival and departure where silent nights are interrupted solely by train whistles. The Midwest is where your horizon is defined by sky. Our sky is our coast, and our flyovers are our passing ships. Only in our largest cities where skyscrapers obscure and cast shadows, does the Midwestern sensibility slip away.

Ornate artifice and extravagance have little place here. The clear-cut distinctions, between town and country, fall and winter, and spring and summer, sky and land, growing season and harvest season, death and survival—this makes for a more classic approach to art. The Midwest values art that explores what it means to be alive: relationships, family expectations, joy and heartbreak. This is not to say Midwesterners are simple: a Midwesterner can communicate more with a shrug and “Oh, it’s fine” than a studied interpretation and namecheck of Foucault or Nietzsche or Barthes.

In the Midwest, power and respect come less from who you know and more from what you do. We smile and nod as East Coasters yak and West Coasters chill: the East Coast talking big talk—Manifest Destiny, a nation sea-to-shining-sea, cities on hills—and the West Coast breathing out a chill sigh of relief at having arrived west, at last.

Here we are, settled on America’s 19th century spoils, acquainting ourselves with these stolen lands—gifts of American empire—and left to sit and think in the quiet, or sit and avoid thinking in the quiet—via yardwork or snow shoveling or weather-proofing—about the land and our relationship to it. To be a Midwestern artist is to face not the shining seas, but our horizon—land and sky, death and life, history and possibility—to be a Midwestern artist is to attempt an answer to Frederick Jackson’s Question, a question born out of this land, “Now what?”

Your support as a Friend of the Englert is integral to supporting endeavors including this fellowship, our educational programming and outreach, and original commissioned works. Thank you for your ongoing support!