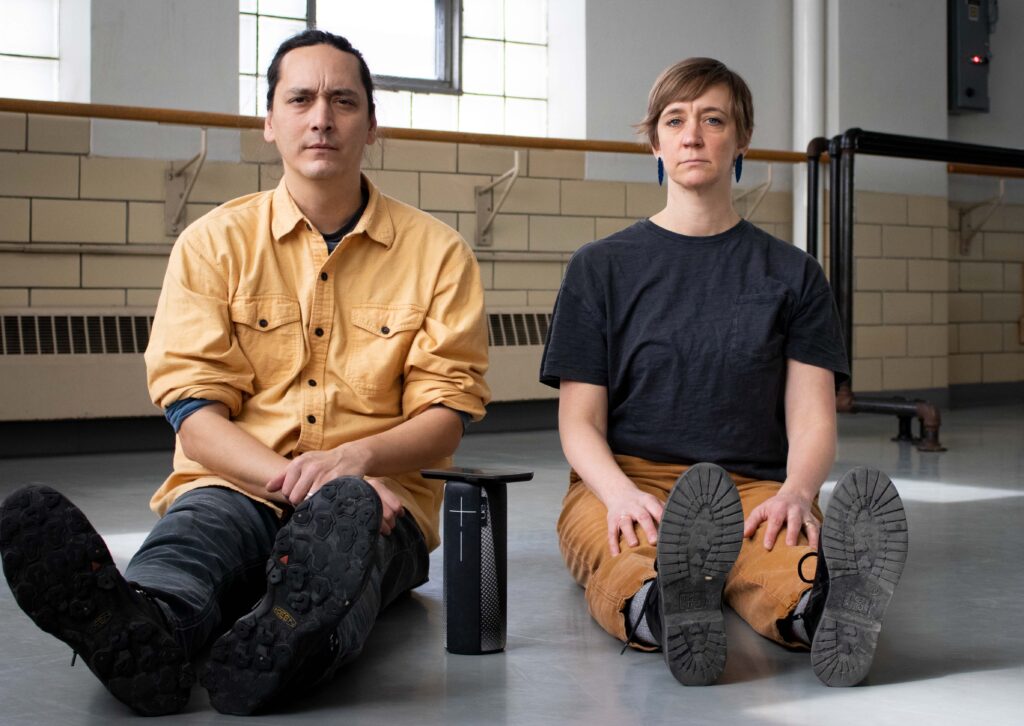 Inquisitive art meets expression in the collaborative dance performance, Unfinished Business, on May 27-29. Presented by Englert Wavelength, Unfinished Business features artists Melinda Jean Myers and Kurt Chiang as they explore the question: “What is our unfinished business as artists, educators, and people?”

The production culminates from Myers and Chiang’s years of combined knowledge as dance and theatre professionals. Part dance, part spoken word, and part improvisation, the performance melds dance and movement aesthetics that the duo have individually crafted from their hybrid artistic practices.

The Englert is also pleased to announce that Sunday’s performance of the show on May 29 will be Pay-What-You-Can, so an extended audience will have the opportunity to take part in this experience.

Learn more below about the artists, how the show came to be, and what audiences can expect from this weekend.

How did you two become collaborators, and how did you come to develop this show together?

Myers: Kurt and I met in Chicago, almost ten years ago. I was performing in a dance with Lucky Plush Productions, and Kurt was performing an original work with The Neo-Futurists, and we saw each other’s work. It felt like we had similar aesthetics of performance, movement, humor; all that stuff.

Chiang: Mindy asked me pretty much immediately to work on a dance together, even though I really had no formal dance experience, and she had toured internationally with a major contemporary dance company out of New York [Trisha Brown Dance Company]. In any case, I said yes.

Myers: Then, my life redirected to becoming a mom. And then I moved to Iowa. Only last year I contacted Kurt again to try and finally make this thing.

Chiang: So I said yes again. I also said, “We have unfinished business.” And we just made the show off of that, as a concept but also an intention.

Where is the music for the production from?

Myers: Actually the show doesn’t use a lot of music at all. The scenes, dialogue and dances are set mainly to voice memos that we exchanged with each other over the past year.

Chiang: We’ve found a common language of physical gestures that can be reshaped and abstracted slightly — it can be used in the more theatre-ish parts of the show, as well as the dance.

Myers: I think it also lets the dances be funny in a way that maybe they wouldn’t be if they were set to conventional music.

What do you hope audiences take away from the performance and/or workshop?

Chiang: I want people to experience it the same way I experience my favorite kinds of dance and theater—that it’s surprising, refreshingly honest and unpretentious, and that they leave more aware of how they act, move, and exist through the world, and that maybe they adjust that to be, I don’t know, sillier—less cool, less pressurized.

Myers: In the show, there is a question we ask and ask and ask, again and again, “What’s it? Is that it?” And we complicate the story and ourselves with trying to pin something down. But it just keeps failing, or splintering apart. I like the idea of the audience leaving with that level of curiosity, but also acceptance that maybe identity and truth is always changing. It’s always busy.

Englert Wavelength is an educational programming series focused on “deeper learning through the arts,” so this weekend of performances is rounded out by an intimate workshop on Saturday, May 28, with the artists titled “Finishing the Business.”

Rooted in the creative research of their two-person show, the workshop will be centered on movement improvisation, writing, and storytelling. They will guide participants in breaking down physical and verbal expressions of themselves through exploration of their personal goals, daily tasks, body movement, and habit.

Register for the workshop here, and get your tickets to this multi-faceted work today.